The treatment didn’t seem to make much of a difference, but it set me on a course of being a bit of a medical daredevil. 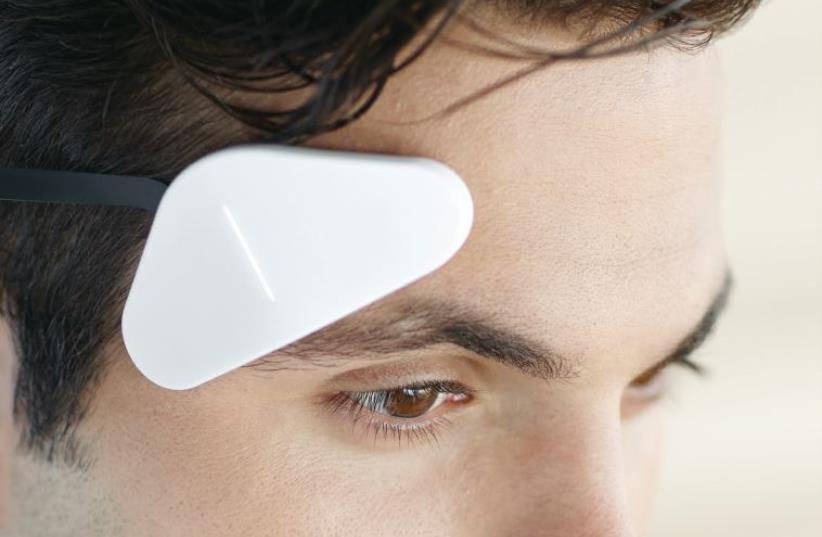 Real results or the placebo effect? The writer shocks his brain with this Thync device to see if there is a difference in his well-being
(photo credit: COURTESY THYNC)
Advertisement
Over the last three weeks, I’ve been zapping my brain with small jolts of electricity. I bought a small device called a Thync. It’s a triangular piece of plastic that looks kind of like a thinner version of the fried potato hors d’oeuvres served at Israeli weddings, only in white matte rather than greasy golden brown.You attach the Thync to your forehead, just above the right eyebrow, using the medical grade adhesives it comes with, and pair it via Bluetooth with your iPhone. The Thync mobile app then delivers a patterned dose of electricity designed to either calm you down or pep you up, depending on the setting.The Thync is the first attempt at taking what’s known as trans-cranial direct current stimulation mainstream.The Thync’s inventors say that it’s safe – they point to a wealth of scientific papers with titles like “Transdermal neuromodulation of noradrenergic activity” – and add that because the power is so low, the US Federal Drug Administration isn’t even testing it. It’s considered a “lifestyle product” rather than a mini-electroshock therapy kit.Still, administering electricity directly to my brain – am I crazy? Well, not quite crazy, but sleep deprived for sure. I’ve suffered from chronic insomnia for more than a decade and can’t get to sleep without pills. So when I heard about the Thync, my own thinking went: If this can induce drowsiness without the side effects of Ambien or Lunesta, why not give it a try? It’s not the first time I’ve veered into the fringes of alternative medicine to tweak my body. In 2010, I took a dose of helminths – a type of intestinal hookworm – after reading that these therapeutic parasites, which co-evolved with the human body over millions of years (and which we’ve flushed away – literally – with modern hygiene), could help with autoimmune disorders like ulcerative colitis and Crohn’s disease.The treatment didn’t seem to make much of a difference, but it set me on a course of being a bit of a medical daredevil.Which is ironic, given that, in general, I’m the biggest cynic on the block when it comes to most non-Western medicine. I’m a regular reader of Skeptic magazine and I was furious at Steve Jobs for trying to treat his pancreatic cancer with fruit juices.But then again, science is making some remarkable discoveries about the power of the placebo.Jo Marchant is the author of Cure: A Journey into the Science of Mind over Body. Placebo painkillers, it turns out, “can trigger the release of natural pain-relieving chemicals called endorphins,” she writes in Scientific American. “Patients with Parkinson’s disease respond to placebos with a flood of dopamine.”Fake oxygen seems to help with altitude sickness.To be sure, placebos are not going to cure cancer or help with heart disease. But Marchant emphasizes that patients are not being “fooled” by placebos either. “These are real, biological changes...it’s not all in your imagination.”Perhaps most surprising is that placebos seem to work even when recipients know. Ted Kaptchuk heads Harvard’s Center for Placebo Studies. In a recent study, he found that patients suffering from irritable bowel syndrome who were told they were getting a sugar pill reported twice as much symptom relief as those in a no-treatment group.Is that how my brain-zapping Thync works, too? If so, I must have a pretty high level of resistance. In my first few days using the “Good Night” mode, I didn’t feel any benefit. If anything, it was the opposite – when the Thync ramps up its 20-minute cycle of electro-pulses, I felt an intense itching on my forehead where the device was sitting and a heavy pressure that gave me a whopper of a headache.Thync’s literature says that’s normal.Still, why would I subject myself to that? My sleep didn’t seem to be improving.It wasn’t until a few days later when, mid-afternoon, I tried the “Surge” setting – designed to provide “a rush of energy and motivation” – that I noticed a change. My mood felt brighter. I wasn’t tired. When I took the dog out for a walk, I had a desire to skip down the block, to sing and laugh.Was this real or placebo? Real, insists Thync co-founder Jamie Tyler. “Our brains already have the power to combat stress and achieve a calm state,” he says. Thync’s electrical neuro-signaling simply “invokes these mechanisms on demand.”Dr. Roy Hamilton directs the Lab for Cognition and Neural Stimulation at the University of Pennsylvania, where he says he’s produced some intriguing results using electrodes to stimulate the brains of healthy people. In one study, patients became more creative. Another helped them quit smoking faster.But Hamilton wouldn’t give the Thync two thumbs up just yet. “Your brain is not just one cognitive function,” he said on the podcast Note to Self. “It consists of circuits modulating circuits interacting with networks. It’s the most complex instrument in the known universe, and we’re hitting it with electrical current in these pretty crude ways.”That cued up a “surge” of a different kind – a return to my skeptical self. Sometimes you don’t want to be the first person beta-testing an entirely new contraption.I’ve got a few more days to try out my Thync (there’s a 30-day money-back guarantee – helpful when you’re experimenting with your brain). I haven’t decided if I’ll keep it or not.Ask me in the morning after a night of deep Thync.The author is a freelance writer who specializes in technology, start-ups and the entrepreneurs behind them. More at www.bluminteractivemedia.com