Thousands of students work diligently to advocate for Israel

The story of Israel and the Zionist struggle is one that nearly everyone can relate to in some way. 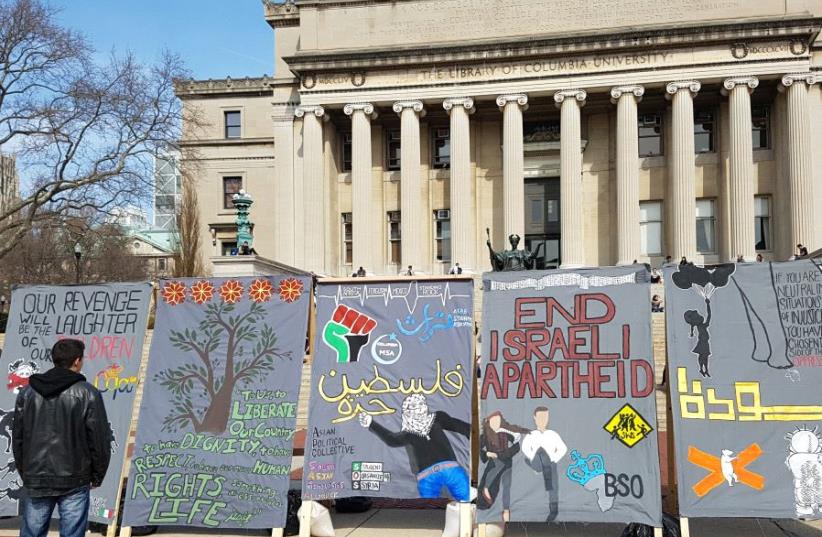 Israel Apartheid Week at Columbia University.
(photo credit: Courtesy)
Advertisement
As “Israel Apartheid Week” takes place on college campuses around the US, it is easy to take one look at the situation and say that things have never been worse for Jewish and pro-Israel students. Even my campus, the University of Texas at Austin, has not been immune to the recent wave of antisemitic and anti-Israel sentiment sweeping across the country. This semester alone we’ve had our Hillel’s window shattered, a professor investigated for making antisemitic “jokes” in class,” and anti-Israel events hosted on a weekly basis. However, as troubling as these incidents are, as well as the images of protests, mock-checkpoints and apartheid walls, it is important to remember that they will not go unanswered.In recent years, for the first time in Israel’s modern history, there are thousands of highly trained, organized student activists well versed in countering anti-Israel and antisemitic sentiment at hundreds of universities around the country.By bringing in human rights activists, former IDF soldiers, academics, and hosting various cultural events, groups like CAMERA, StandWithUs, Reservists on Duty, the David Project and others work with Jewish and non-Jewish student leaders to rapidly respond to issues on campus as they arise.This semester alone, we have brought to speak at my university a group of former IDF Lone Soldiers, consistently hosted pro-Israel educational events open to students, and organized an enormous, campus-wide celebration of Israel at our annual “Israel Block Party.” Israel Block Party, the largest pro-Israel campus event in North America, hosted over 10,000 people throughout the day and engaged them through technological, cultural and political showcases about Israel. Perhaps most significantly, our campus pro-Israel organization Texans for Israel was able to bring 35 student leaders from groups such as the Black Student Alliance, College Republicans, University Democrats, Student Government and many others to this year’s AIPA C Policy Conference.The efforts being made to interact with and share our perspectives with student leaders are essential to ensuring that influential members of our campuses and communities are able to learn the facts and hear a perspective regarding Israel which is often shouted down. Although it is an undeniably challenging time for us, never before have so many students not only taken pride in their connection to Israel, but had the working knowledge needed to articulate it to others.Make no mistake, there is still a great deal of work to be done on campuses.Although pro-Israel campus activists like myself have never had more support from the Zionist community, we must ensure that we foster understanding and build relationships with communities other than our own as well. Some of Israel’s strongest advocates are not Jewish and may not have even been particularly pro-Israel during their time in college.Their shifts in perspective did not come from having their concerns dismissed or being labeled as “haters,” but through respectful dialogue with the goal of finding a common ground.The story of Israel and the Zionist struggle is one that nearly everyone can relate to in some way. Our history has connections to the struggle against racism, the return of an indigenous people to their historic land, the reclamation of a language and a culture, technological and scientific achievement and a plethora of other positive messages, but our conversations regarding Israel always seem to drift toward conflict and terrorism. There is so much to celebrate about Israel’s achievements and history that remains unknown and ignored on college campuses but should be given the same prominence that security issues receive.Today, if there is one issue that must be addressed head-on by pro-Israel students, it is that of disingenuous intersectionality.What I mean by disingenuous intersectionality is the increasingly prevalent attempt by anti-Israel campus organizations to unite historically marginalized groups such as indigenous, black, LGBTQA+ and undocumented student groups under the false premise that they share a common struggle against oppression and that Israel is simply a new manifestation of the broader societal injustices they can relate to.This movement is not rooted in genuine concern for human rights or social justice, but in the exclusion of Jewish voices through statements such as “Zionists cannot be feminists” and blanket condemnations of Israel as part of unrelated social justice campaigns such as the Black Lives Matters movement. It is of the utmost importance that Zionist students ensure that their voice and presence are felt in progressive circles as strongly as it they are in conservative ones so that we can provide genuine support to important causes and prevent the coopting of their platforms by anti-Israel groups. We can neither be excluded, nor exclude ourselves, from taking part in the significant social movements of our generation.It is my hope that as you read articles that detail the challenges on American university campuses you keep in mind the thousands of students working diligently to advocate for Israel and share their passion with their peers. Although there is a great deal to be concerned about, there is even more to be proud of and look forward to.The author is a first-year student at the University of Texas at Austin and the Texas AEPi Israel Engagement chairperson.