Time for home demolitions to be tested by the Supreme Court

In addition to questions surrounding its legality, it is difficult to prove that it is indeed effective at achieving the goal it was set to promote. 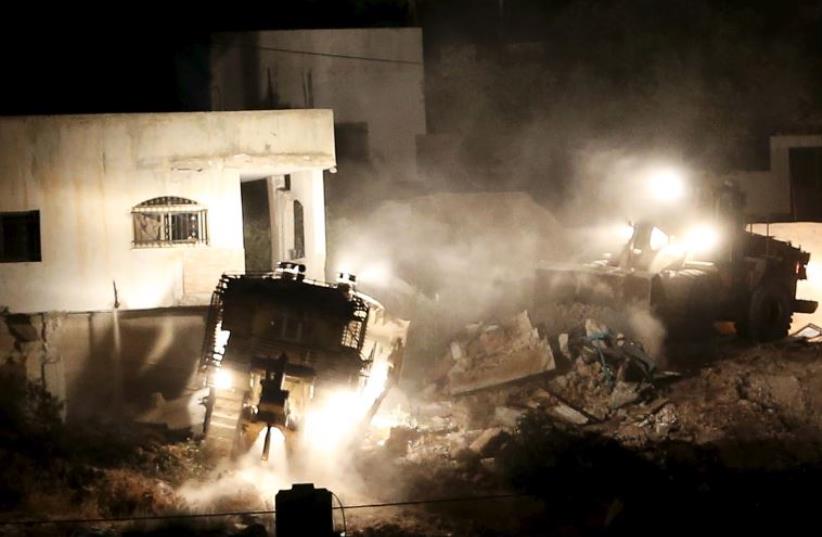 Israeli army machines demolish a Palestinian house during an Israeli raid in the West Bank city of Jenin
(photo credit: REUTERS)
Advertisement
The demolition of homes belonging to the families of terrorists, as an act of deterrence in response to actions that endanger the State of Israel’s security, is an extremely drastic measure that violates human rights.In addition to questions surrounding its legality, it is difficult to prove that it is indeed effective at achieving the goal it was set to promote.Accordingly, numerous individuals, including former high-ranking officials of Israel’s national security establishment, take issue with the position that home demolitions are a deterrent.Rather, they claim that home demolitions might actually increase the number of violent acts. Notably, a professional committee headed by Maj. Gen.(ret.) Udi Shani recommended in 2005 that home demolitions be stopped since they brought about more harm than benefit.Nonetheless, this measure was resumed in 2008 due to the increase in terrorism originating from east Jerusalem.The doubts regarding the legality and effectiveness of home demolitions led to the submission of thousands of individual petitions against this practice to the Supreme Court of Israel, both against the intention to demolish specific homes and ones that question the legality of the method generally.The court in the vast majority of cases allowed the state to carry on with the demolitions.Recently, against the backdrop of the current wave of terrorism in Israel, the use of home demolitions was accelerated. In response, a growing number of petitions are being submitted against the practice, both in specific cases and in general. After decades through which the Supreme Court recognized and affirmed the position advanced by the State of Israel, it seems that we are on the verge of a possible change. This is due to the fact that five Supreme Court justices, out of 15 presiding justices, have expressed doubts regarding the legality and effectiveness of home demolitions in petitions brought before them. More importantly, there is a growing acceptance among those justices of the need to reopen the discussion on the principal legal issues that cast doubt upon whether this method is legal and effective.The change began after several rulings by Justice Menachem Mazuz, who had defended the policy himself during his term as attorney-general, including when home demolitions came back into use in 2008. Mazuz, in several recent rulings, questioned the method’s effectiveness and the proportionality of its use, as well as the validity of the old precedents regarding it in light of important developments in international law and Israeli constitutional and administrative law.Four other justices joined Mazuz in different petitions submitted to the Supreme Court. Together, they are calling for an in-depth discussion on the legal questions surrounding the policy.The fact that one-third of the Supreme Court’s justices have raised doubts as to the legality and effectiveness of home demolitions shows the time has come to reevaluate the long-standing precedents on the matter, and examine them in an expanded panel. Notably, the Supreme Court discussed in the past various actions by security forces, even ones committed during armed conflicts. These included sensitive issues such as torture by the Shin Bet (Israeli Security Agency), targeted killings and the legality of the “neighbor procedure.” There is no reason why the Supreme Court, which enforces the rule of law in Israel and is internationally respected, should deal with complex issues in certain security matters but avoid discussing the legality of home demolitions.This premise gains additional validity when we consider that the defense establishment has never submitted a detailed position on the matter, nor did it present any empirical data about the policy’s effectiveness even though the Shani Committee’s conclusions show real doubt that it is efficient.A true examination of the issue by the Supreme Court is also important to safeguard members of the Israeli security forces, who work day and night to maintain the security of Israel’s citizens. The reason for this is the principle of complementarity, which makes the application of international or foreign courts’ jurisdiction conditional upon the question of whether the states directly involved in the incidents conduct a genuine investigation of the complaints.It is of great importance to discuss the issue of home demolitions on both the moral and legal levels. Only a sincere discussion will bring about legal validity for security personnel.The Supreme Court justices have already proven their ability to find a proper balance between the State of Israel’s security interests and the need to protect human rights. Hence, the security personnel and the Israeli public deserve – and even require – a statement from the Supreme Court on the legality and effectiveness of home demolitions.Tal Mimran, attorney at law, is a researcher at the Israel Democracy Institute and an adjunct lecturer in international law at the Hebrew University of Jerusalem. Nadiv Mordechay is a research fellow and PhD candidate in public law on the law faculty at the Hebrew University.