There is a disconnect between the demands of life in Israel and the Israeli education system. 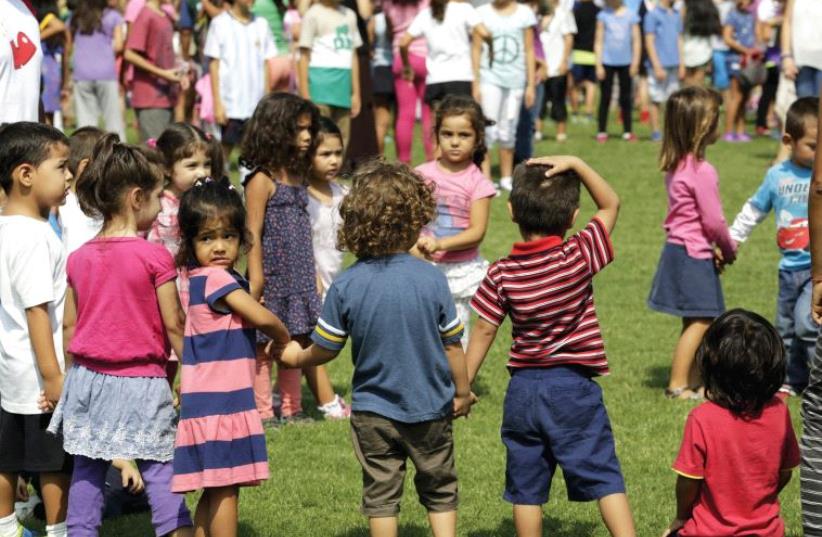 ‘I SUGGEST we begin the school day with an hour of connection activities that bring the students together. We need to create interaction among the students that will lead them into creating a miniature society where they care for one another like a family.’
(photo credit: REUTERS)
Advertisement
As always, a new school year means new hopes, as well as new dreads. But these days, the dreads far outweigh the hopes.Our education system is deteriorating and we all feel it – and by education I am not referring to success on math and English tests. The rising racism within Israeli society, growing fragmentation and the increasingly violent discourse on social media are all indicative of the dire state of our education system. It is time we raise our boys and girls to be, well, mensches.Restructuring education The current structure of education was formulated in the late 18th century during the Industrial Revolution. Its purpose was to qualify illiterate people to perform as efficient assembly-line workers.Even today, schools’ top priority is to turn children into productive employees. As long as grades alone are the gauge of success, the education system is doing society a disservice; education should focus far more on rearing and far less on inculcating information.There is a disconnect between the demands of life in Israel and the Israeli education system. This divide is causing us to become increasingly indifferent and even hostile to each other. In a country that has been plagued with unfounded hatred since the ruin of the Temple, our top educational priority should be to reinstate the aspiration for loving our neighbors as ourselves.Just as parents naturally care for their children’s future and do all they can to keep the family together even after they themselves are gone, as a society, we should see to the well-being of the next generation. We need to help them improve their interpersonal relationships and discover the benefits of the power of unity.Initiating care through connection circles To spark the shift I just described, I suggest we begin the school day with an hour of connection activities that bring the students together.We need to create interaction among the students that will lead them into creating a miniature society where they care for one another like a family. Such a spirit at school will foster warm and friendly connections among students and will balance the natural tensions that arise among them, and will allow them to develop their full potential.“Education does not create new things; it elicits what is already planted within,” said Rabbi Abraham Isaac Kook.During the connection activities, teachers would provide students with tools for building solid and healthy relationships with their peers using positive examples of interdependence and mutual consideration.They would teach the students how to better cope with the contemporary reality of an integrated and globalized world. The children would sit in circles so as to give everyone an equal status, and also helping them see and listen to each other. Gradually, the students will learn to share their views without forcing them on others, until they achieve mutual understanding.In this way, they will learn to cover their innate self-centeredness with care and develop friendship, connection and love.Regaining our lost bond The teacher would sit and participate with the children in the discussion circle, and speak with them as equals. Instead of lecturing, teachers would ask questions that lead the children to acquire knowledge and answer questions cooperatively, by conversing with each other.This will infuse the information with much more social meaning.Children growing up in an environment that values them according to their consideration for others and contribution to society are guaranteed to blossom. Such children will emerge from school as mature adults with a broad perspective on life and the world they live in, and with a sense of purpose and care for building a society based on consideration and equality.“It is a shame to admit,” writes Rabbi Yehuda Ashlag (Baal Hasulam), “that one of the most precious and important merits we have lost during the exile is the...natural feeling that connects and sustains each and every nation.The threads of love that connect the nation, which are so natural and primitive in all the nations, have become degenerated and detached from our hearts, and they are gone.”Within our people lies a profound wisdom of connection that formed over many generations. Now we must implement this method of connection, whose roots date back to the mercy of our forefather Abraham, and plant it in the hearts of our children. If we want to guarantee the continued and prosperous existence of our country, we must restore this spirit and form of education.

The author is a professor of ontology and the theory of knowledge, has a PhD in philosophy and Kabbalah and an MS in medical bio-cybernetics.He is the author of over 40 books, which have been translated into dozens of languages. He is a sought-after speaker and has written for or been interviewed by The New York Times, The Jerusalem Post, Huffington Post, Corriere della Sera, The Chicago Tribune, The Miami Herald, The Globe, RAI TV and Bloomberg TV, among others.
Advertisement
Subscribe for our daily newsletter