To address its main threat, the GCC must look inward 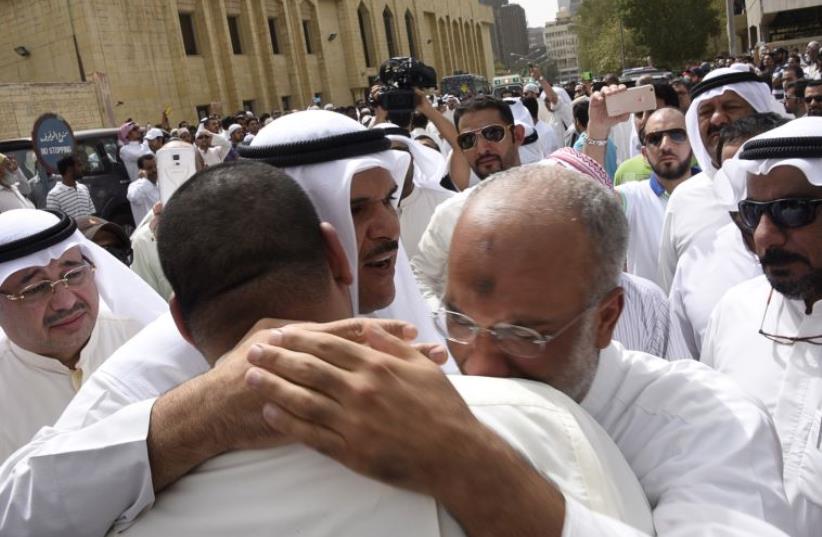 Kuwaiti Information Minister Sheikh Salman al-Humoud al-Sabah (C) consoles worshipers outside the Imam Sadiq Mosque after a suicide bomb attack following Friday prayers
(photo credit: REUTERS)
Advertisement
On July 6, the third of four Saudi brothers was arrested in al-Khafji, located in northeastern Saudi Arabia barely 15 km from the Kuwaiti border, for involvement in the June 26 suicide bombing against a Shi’ite mosque in Kuwait City. He and one of his brothers, who was detained in Taif, allegedly delivered the explosives to the man who drove the bomber a day prior to the attack. Of the two remaining siblings, one was arrested in Kuwait while the fourth is fighting with Islamic State (IS) in Syria.Kuwait, for its part, has referred a number of people to prosecution in connection to the bombing. This includes at least five individuals accused of assisting the bomber, a Saudi national who reportedly transited in Bahrain for 2.5 hours prior to arriving in Kuwait the morning of the attack. Three of the five, the person who drove the bomber, the car’s owner and the latter’s brother are Bedoon, a name referring to stateless Arabs. The remaining two, the driver’s landlord and his brother, are Kuwaiti citizens.Aside from these individuals sharing a connection to the Kuwait City bombing, they share an important factor in common, that is, they are citizens of a Gulf Cooperation Council (GCC) country.(The Bedoon, while lacking Kuwaiti citizenship, claim they are entitled to it and have resided in Kuwait for some time.) This common feature serves to highlight the threat posed to these countries by the radicalization of locals, and the radicalization of Saudis in particular, and holds true for the other member states as well.
See the latest opinion pieces on our page
More examples? The woman recently given a death sentence for killing an American citizen and placing a homemade bomb outside of an Egyptian- American doctor’s home in December 2014 in Abu Dhabi is Emirati. Saudi nationals were responsible for the May suicide bombings against Shi’ite mosques in the country’s Eastern Province.The majority of militancy-related arrests in the latter, as well as prior attacks that largely involved shootings, involved Saudi citizens. Meanwhile, a Reuters report from July 7 reported that, as of March, nearly 2,300 Saudi citizens had traveled abroad to join militant groups in Syria and 4,209 “security prisoners” are currently housed in the country’s prisons.And this is just referring to Sunni radicalization.Discussing the potential for Shi’ites to take a similar path would require another article. In Bahrain, for example, the presence of Shi’ite militant groups amid ongoing protests since 2011 points to the perception among some that nonviolent action cannot effect change. In Saudi Arabia, the absence of concrete reform toward the Shi’ite population certainly holds the potential for unrest to increase in the long term.Moreover, in Kuwait, the assistance provided by Bedoon may represent a bigger problem. Their involvement suggests that this population could be particularly susceptible to radicalization.The Bedoon community has significant grievances with the Kuwaiti government, which refuses to grant the majority of the population citizenship and all the corresponding benefits. Reports have estimated the population at anywhere from 93,000 to over 150,000.As a result of the Kuwait City and Eastern Province bombings, increased security measures have been implemented across the GCC countries. The number of arrests and the swiftness with which the bomber and those who assisted him were named and detained also highlight the capabilities of the Kuwaiti and Saudi security and intelligence forces. Citizens are joining volunteer protection units and also becoming either more aware or paranoid, depending on how one views it. In Oman, for example, rumors had circulated on social media regarding an attempted suicide bombing of a Shi’ite center (untrue) and police denied similar rumors that three cars had entered the country “loaded with guns.”Security measures, however, will be insufficient. The ability of IS and other militant groups to attract GCC citizens is a problem that should be addressed by more than arrests and increased security.Yes, Saudi Arabia manages rehabilitation programs for militants, but their success rate is contested. Kuwaiti legislation that would establish a database of DNA samples from citizens, foreign residents and visitors is likely to trigger privacy arguments, while a WhatsApp ban reportedly being mulled seems likely to be unpopular, with unclear impact on security.Rather, a shift in the attitude toward the Shi’ites seems necessary, particularly in a country like Saudi Arabia where perceptions of this sect as apostates exists even within the education system.In Kuwait, whose population is reportedly 30 percent Shi’ite, many more concrete expressions of unity have been reported. Not only did the country’s emir arrive at the scene of the bombing, but joint Sunni-Shi’ite prayers were recorded in the immediate aftermath and days following the attack. The Saudi- based anti-Shi’ite al-Wesal TV station was also reportedly suspended. At the same time, a solution more practical than a previous plan to grant Bedoon Comoros citizenship may be required in order to keep members of this population from being recruited.A Saudi national transiting through Bahrain to conduct a suicide attack in Kuwait means that this has clearly become a broader GCC issue. The organization appears to feel the same, as demonstrated by a recent emergency meeting of interior ministers. Increased security coordination should be expected, and the recent launch by the anti-IS coalition of the UAE-based Sawab Center to combat militancy online is a start.Counter-radicalism should be adopted alongside counter-militancy. And perhaps placing equal priority and resources on combating this radicalism as some do on countering Iranian influence (i.e. the Yemen intervention) would be a good next step.As the nationalities of those arrested and those attacking demonstrate, the GCC countries will need to look deeper inside if they want to prevent their citizens from radicalizing in the first place.The author is a senior intelligence analyst and head of the Gulf Desk at Levantine Group, a geopolitical risk and research consultancy. Follow her on Twitter: @Miriam411.