To French Israelis: A wake-up call to block a Le Pen presidency

Reflecting the poor state of French internal affairs and economic sluggishness, Jews made aliya en masse in the past two decades. 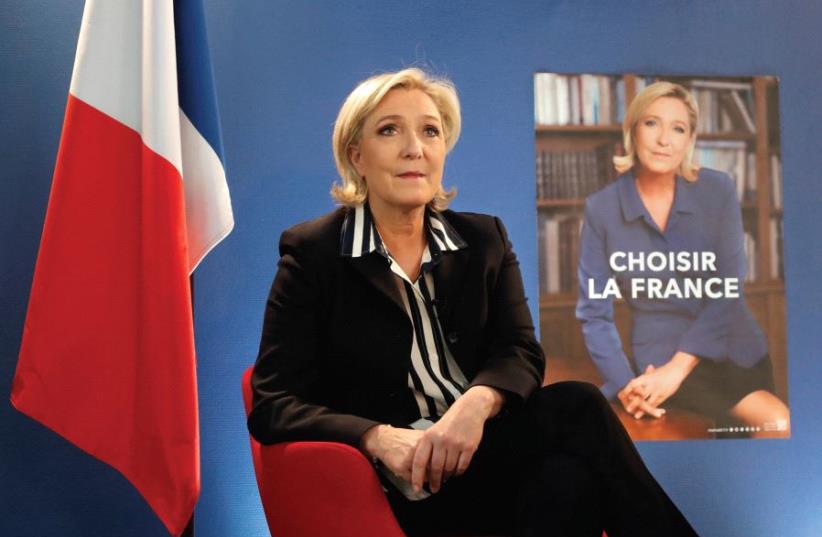 MARINE LE PEN, French National Front (FN) candidate for the 2017 presidential election, speaks during an interview over the weekend
(photo credit: REUTERS)
Advertisement
French citizens have a lot to be frustrated about.For about 20 years, the French economy has barely been muddling through. Unemployment among the young is soaring. More recently, Islamic State-inspired terrorist attacks have started to become part of the day-to-day routine, demonstrating the failed integration of many French immigrant citizens.Reflecting the poor state of French internal affairs and economic sluggishness, Jews made aliya en masse in the past two decades.Unsurprisingly, French society is responding to globalization and neoliberalism with rising levels of exasperation, a sentiment that has thrown voters in unorthodox directions in the first round of the French presidential elections, which were held on April 23.Among the four leading candidates, only one was representing a traditional political party.Francois Fillon, the heir of former president Nicolas Sarkozy, and the anti-European, hard leftist Jean-Luc Mélenchon came 3rd and 4th respectively, closely behind the winners Emmanuel Macron, a young, progressive, pro-European neoliberal centrist, and Marine Le Pen, the populist, xenophobic, antisemitic Holocaust denier and anti-EU far-right candidate.This Sunday, May 7, the 2nd round of the elections will take place to determine who, between Macron and Le Pen, will become the next French president.The differences between the two should have made the choice between them too easy to be worried about, and ought to have guaranteed a Macron victory. Here are some of the most important features of the two: Emmanuel Macron is a former economy minister.His program is precise, sound, and vetted by leading economists. He supports women’s rights, minority rights, and comes out strongly against all forms of discrimination. His social policies are solid, while not deterring to the richest. He maintains good relationships with other Western leaders, and has a clear plan to strengthen domestic security, which is endorsed by prominent counter-terrorism experts. Politicians and French intellectuals alike have rallied behind Macron.Marine Le Pen, on the contrary, has a dubious history of malversation and clear autocratic tendencies.Her economic plan to exit the European Union is just as hollow. Wherever the Front National was elected in local elections, debt is soaring and journalists are threatened. More important to Israeli-French citizens, Le Pen’s party today is as antisemitic as it has been under her father’s leadership (known for references to Jews and ovens and “unfinished business”), as much as it is anti-Muslim. She was quick to dismiss France’s role in the Holocaust. Le Pen further wants to end dual-citizenship rights for all, which would mean a great deal of trouble for Israeli-French citizens and their future spouses and offspring. Her plan to stop Islamic terrorism by reducing immigration to zero, in a country where most terrorists are native-born, is more slogan than substance.Finally, a Le Pen presidency would also clash with Israel: Nicolas Dupont-Aigna, her pick for prime minister, has previously demanded aggressive intervention in the Israeli-Palestinian conflict, calling for a French recognition of the State of Palestine, to force Israel out of the settlements and for stopping “disproportionate” attacks against Gaza.Unsurprisingly, leading rabbis have warned that if Le Pen were to be elected, Jews in France would have to leave, and President Reuven Rivlin recently condemned Le Pen’s “new, dangerous form of Holocaust denial.”Yes, the choice ought to have been easy. Yet Macron’s lead over Le Pen is shrinking on a daily basis. Antisemitism isn’t as strong an argument in France today as it was in 2002. By now, and between the Trump election and the Brexit, it should feel too much like déjà vu.This time, French democracy, a pillar of the EU and home to the world’s third largest Jewish community, is at stake.Out of 200,000 French Israelis, 75,000 are registered to vote in the French elections in Israel. Yet on April 23, less than 14,000 of them exercised that right.Many French Israelis do not even know that they have the right to vote in this historic election.If you have been contacted by the candidates or by the French consulate, you are already registered, and can find your voting station at the consulate website.If in doubt, call the French consulate, and check whether you are an eligible voter. Voting takes place on May 7 between 8 a.m. and 7 p.m. Voting is simple (if you are too busy you can even request a volunteer surrogate to vote on your behalf!) and this time it means more than ever, for Europe, for Israel and for the Jewish People.The author is a PhD candidate, social activist and the grandson of Holocaust survivors.