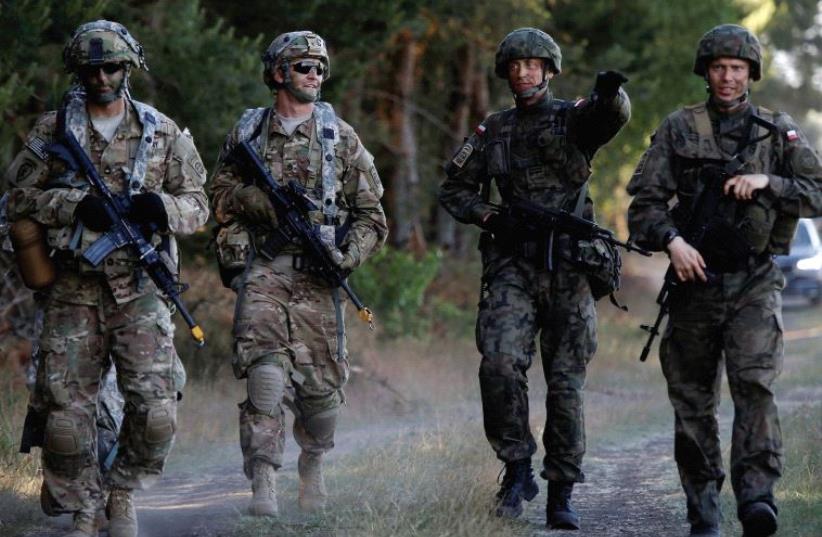 UNDER DONALD TRUMP will they be on their own? Poland’s 6th Airborne Brigade soldiers walk with US 82nd Airborne Division soldiers during the NATO allies’ Anakonda 16 exercise near Torun, Poland, in June
(photo credit: REUTERS)
Advertisement
One of the most interesting sights I witnessed during a recent visit to the Baltics was people on the streets applauding or waving when they saw NATO aircraft flying over or NATO troops go by.People I met in Estonia, Latvia and Lithuania told me they liked the sight of NATO because their greatest fear is that Russian President Vladimir Putin is planning an uninvited visit.Donald Trump just gave them a lot more to worry about when he said the United States could not be relied upon to keep its treaty commitments to its NATO partners. It was a virtual invitation for the autocratic former KGB chief to grab more territory for his new Russian empire.It’s only been a week since Trump was nominated but he’s already having an impact on world affairs: our allies are terrified and some of our enemies delighted.Dan Schueftan of Haifa University called Trump “a threat to the peace of the world” and his talk about abandoning NATO allies “supremely irresponsible.”Trump could easily lead Putin to the wrong conclusion about American reliability, he warned.Putin apparently returned the favor for the Republican presidential candidate by dumping – via WikiLeaks – thousands of purloined emails allegedly stolen by his intelligence services – the KGB and the GRU – from the Democratic National Committee.Independent cybersleuths and other sources report significant evidence the Putin government was behind the leaks, and the FBI is investigating. It suspects Russia is dumping the material in a deliberate effort to help Trump, a Putin admirer and fellow NATO critic.The Brookings Institution notes there are “well-documented connections” between Julian Assange’s WikiLeaks and the Russian state. And this may be his revenge for former secretary of state – and Democratic presidential nominee – Hillary Clinton comparing Putin to Hitler following his 2014 invasion of Ukraine.There’s no evidence so far of any direct collaboration between Trump and Putin. The two have expressed admiration for each other – though the Russian’s praise has been more muted (“bright”) than Trump claimed (“brilliant”). When the latest story broke on Monday, Trump tweeted, “Putin likes me.”But that doesn’t mean they don’t serve each other’s interests. Michael McFaul, the former US ambassador to Russia, told MSNBC, “Putin has a personal vendetta against Secretary Clinton” for what he feels was meddling in his 2012 election, and “maybe this is payback.”Trump told The New York Times last week that if Russia invades the Baltic states, he would first determine whether those nations “have fulfilled their obligations to us” before deciding whether to fulfill America’s commitment to come to their defense.David Sanger, who with Maggie Haberman conducted the interview, concluded Trump “could well signal to the world’s authoritarians that they had a free pass – to imprison dissidents, torture opponents and ignore human rights standards without fear that their relationship with the United States would suffer.”NATO, in Trump’s view, is a bad deal for the United States although, as with so many of his other pronouncements, he’s been unwilling or unable to explain why. He seems blithely unaware that it is the most powerful and most successful military alliance in history, responsible for winning the Cold War and a catalyst for democracy among former Soviet satellites.Those countries were anxious to join NATO and were willing to adopt significant political, economic, legal and military reforms as the price of admission.“We’re not about to spill one drop of blood or spend one more dollar unless we know exactly what the outcome is going to be or at least have some notion of what the predictability is,” said Sam Clovis, Trump’s top policy adviser, last week.Newt Gingrich, who is close to the candidate, said that Trump feels Estonia isn’t worth fighting for since it is hardly more than “the suburbs of St. Petersburg,” some 300 km. away, wrote Carl Bildt, former Swedish prime minister. That’s like saying Tel Aviv isn’t worth fighting for because it’s in the suburbs of Damascus, Syria, wrote Bildt.The Trump-Putin bromance stems from the Republican candidate’s belief that “the world is better off in the hands of despots, strongmen and dictators,” writes Alex Shephard of The New Republic.The Republican candidate has praised autocrats past and present, including leaders of Iraq, Libya, Turkey, Egypt and North Korea.Former New York mayor Mike Bloomberg said Trump’s undermining NATO would “compromise our moral leadership around the world... embolden our enemies, threaten the security of our allies, and put our own men and women in uniform at greater risk.”Trump also has financial interests in Putin’s Russia.“Russians make up a pretty disproportionate cross-section of a lot of our assets,” Donald Trump Jr.said in a 2008 interview. “We see a lot of money pouring in from Russia.”Trump has “surrounded himself with people whose deep links to the corrupt world of Russian business would normally disqualify them from US politics,” writes columnist Anne Applebaum. Campaign manager Paul Manafort “has begun repeating arguments identical to those used on Russian state television,” she added.In the eyes of Jeffrey Goldberg, “Trump’s understanding of America’s role in the world aligns with Russia’s geostrategic interests.”If Trump would be so willing to abandon the Baltics and other NATO allies there’s no reason he wouldn’t do the same to Israel, notwithstanding his campaign rhetoric about loving the Jewish state.