Jerusalem, the capital of the Jewish state, is united as it has never been before in human history. This fact is obvious to anyone with the integrity to acknowledge it. 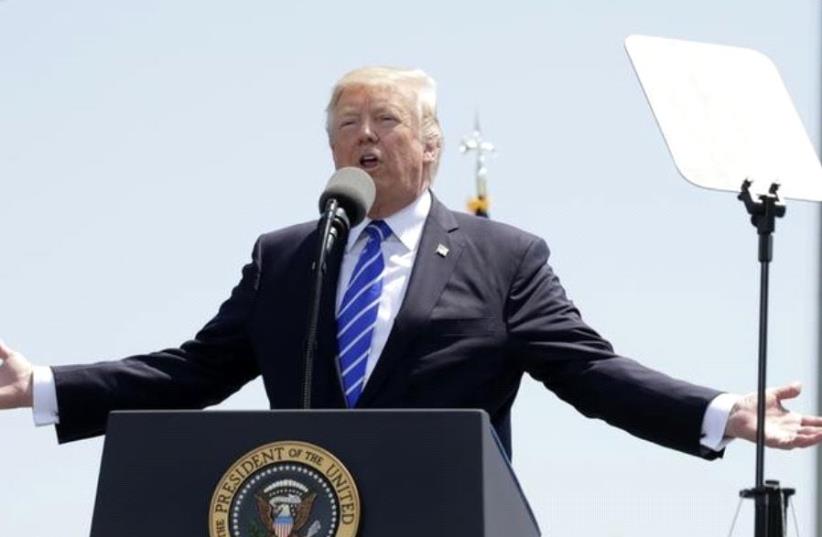 President Donald Trump addresses the graduating class of the US Coast Guard Academy in New London, Connecticut.
(photo credit: KEVIN LAMARQUE/REUTERS)
Advertisement
US President Donald Trump’s visit to Israel is clearly a reflection of the deep connection he feels to the Jewish state. Richard Nixon, Jimmy Carter, Bill Clinton, George W. Bush and Barack Obama all visited Israel at some point during their stints as US president. None, however, came to Israel so early in their terms. Trump’s visit here will be his second stop during his first foreign trip as president.Trump will also be the first serving US president to visit the Kotel. Other presidents have stayed away from the Western Wall out of concern that doing so would imply de facto recognition of Israeli sovereignty over territory that came under Israeli control during the Six Day War. US policy has been to view this territory as “illegally occupied.” Official US reference to sites located outside the 1949 armistice lines refrain from identifying them with Israel.During his visit, Trump, who has never shied away from saying what is on his mind, will undoubtedly be struck by the absurdity of denying that the Kotel, the Wailing Wall, the remnant of the Temple to which Jews have turned in prayer for centuries is an integral part of the Jewish state. To claim that the holiest place on earth for the Jewish people is “occupied” is another form of the political correctness against which Trump has launched an offensive that has resonated deeply not just with Americans but with all people who admire honesty. Trump is the sort of world leader who should state the obvious, knowing full well that the affirmation of the Jewish people’s special connection to the Temple Mount is no affront to Islam, Christianity or any other creed or faith.Even those not inclined to view in contemporary events manifestations of Providence find it difficult to remain unmoved in the presence of a rebuilt Jerusalem. Fifty years after unification, Jerusalem is a bustling metropolis that is bigger today – both in population and in built-up area – than ever before in history.The light rail has transformed the city, bringing down noise and pollution levels while making it easier than ever before to get from one point to another cheaply and safely. Satellite neighborhoods such as Pisgat Ze’ev, Neveh Ya’acov, Har Homa, Gilo and Ramat Shlomo have boosted the population making Jerusalem Israel’s single largest city. Technically, many of these new neighborhoods are seen by the international community as being built on “occupied territory.” Once again, however, the absurdity of such a perception will not escape Trump’s down-to-earth, no nonsense approach.Never before in human history has Jerusalem been so full of life and free. Unshackled from oppressive Jordanian and Ottoman rule, Jews, Muslims, Christians and other faiths have access to the holy sites. Wandering the streets of downtown Jerusalem one is struck by the incredible diversity. Jews and non-Jews, locals and tourists rub shoulders. A Babel of languages can be heard. Sufi Muslims live with hassidic Jews; Greek Orthodox priests are neighbors to religious Zionist rabbis; religious zealots of all stripes walk the same streets as avowed secularists.Israel, the Middle East’s only democracy, makes all this possible while offering economic possibilities undreamed of in any neighboring Arab country. Women of all religions are free and literate; higher education is open to all regardless of faith, race or gender; the best medicine in the world provided by doctors, technicians and nurses of all backgrounds is accessible to all.Jerusalem, the capital of the Jewish state, is united as it has never been before in human history. This fact is obvious to anyone with the integrity to acknowledge it.Is everything perfect? Of course not. Law enforcement, municipal services, the number of classroom in relation to students and other parameters are not equal in Jerusalem’s Jewish and Arab neighborhoods. But judging from the situation in other countries in the region, where the regular flow of clean water and electricity is the exception, equality is greater in Israel’s capital and the chances for further improvement are better in a unified Jerusalem than in a split Jerusalem.Moving the US Embassy to Israel’s capital would be a symbolic recognition of Jerusalem’s miraculous transformation over the past 50 years. Perhaps during his visit, when he sees firsthand the real Jerusalem, Trump will follow through on his campaign promise, which would be a reflection not only of his own admiration for Israel but also of the reality on the ground and in the streets and neighborhoods of the capital.