Trump in Saudi Arabia: Where the US president feels right at home

When Trump first thought about running for president in the 1990s, this is probably what he imagined it would be like: Tours, waving, power. 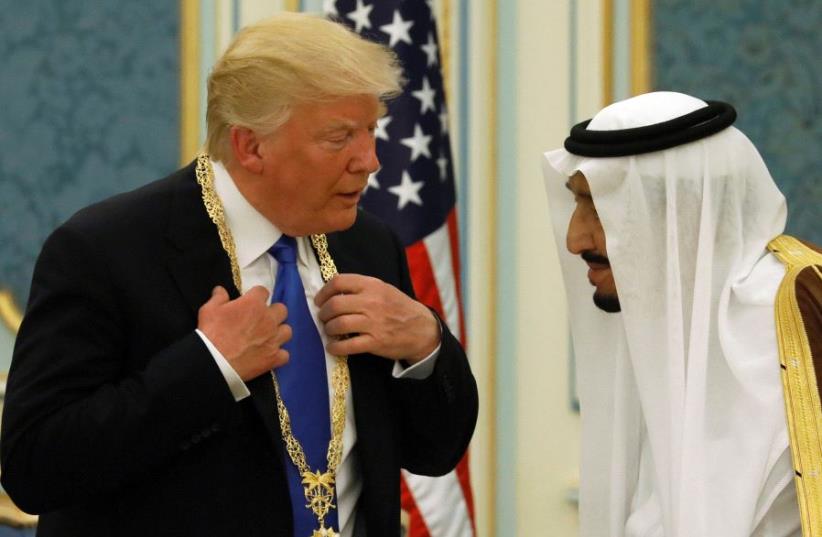 Saudi Arabia's King Salman bin Abdulaziz Al Saud (R) presents US President Donald Trump with the Collar of Abdulaziz Al Saud Medal at the Royal Court in Riyadh, Saudi Arabia
(photo credit: JONATHAN ERNST / REUTERS)
Advertisement
As US President Donald Trump descended to meet Saudi Arabia’s King Salman in Riyadh on Saturday, he seemed to be in his element. There was a red carpet, long lines of men paying him respect, then a short ride to sit in a massive hall and have coffee with the king. Men on horseback with US and Saudi flags flanked his car.When Trump first thought about running for president in the 1990s, this is probably what he imagined it would be like: pomp and circumstance, greetings, discussions, leadership and loads of people paying respect. Tours, waving, power. But the 2016 campaign was so divisive that it tarnished the Trump narrative. Prior to 2016 he was the garish and tacky, but supposedly a successful businessman and television star. His calculated, personality-driven campaign, full of offensive statements, turned him into a figure of derision; cast as a racist, misogynist and even antisemite.He got a second chance after the inauguration. People thought that President Trump might fulfill the role, and campaign Trump would flit away. But optimists were wrong. Trump continued to berate the media and his administration has lurched from one scandal to the next, becoming more isolated and Nixonian every week. It took Nixon five years to get to that point, it took Trump five weeks. But with voices in Washington discussing “impeachment,” Trump goes on his first foreign trip.For a president who focused much of his campaign domestically and whose win was credited to the rural working class, he has focused on foreign policy more than expected. Two meetings with King Abdullah of Jordan, Prime Minister Benjamin Netanyahu, Turkey’s Recep Tayyip Erdogan, the UK’s Theresa May, the Russian foreign minister Sergey Lavrov, President Xi Jinping of China, Shinzo Abe of Japan and Egypt’s Abdul Fatah el-Sisi.Now with Trump facing so many problems at home the pro-Trump crowd in the US have high hopes for the Saudi visit. Fox News described the visit to Riyadh as a “reset” and stressed how important it was that the king met the president at the airport and remarked on how he shook Melania’s hand. “This wasn’t the red carpet, this was the platinum carpet,” said a commentator. “They believe a new chapter is at hand and America is back.” Fox News showed part of the visit live, unlike France24 which showed car races, and CNN which had a special feature on ballooning in “destination Philippines.”  Even though Trump’s support has eroded on the right in the US as conservatives and others ponder what a Pence presidency might look like, some still have hopes.Really what strikes the viewer is that Trump feels comfortable in Saudi Arabia. He gave a sort of Cheshire cat smile receiving a gold necklace award named for King Abdulaziz from the Saudis. His daughter-advisor Ivanka chatted furiously with two robed men seated beside her, Crown Prince Muqurin and the Governor of Riyadh, Faisal Bin Bandar, seeming more in her element than US Secretary of State Rex Tillerson. Steve Bannon was somewhere in the room as well, rumors that he’d been pushed out of the inner circle apparently untrue. Saturday offers some downtime for the Trumps in Saudi Arabia, with a banquet and signing some agreements. On Sunday Trump speaks to leaders of almost fifty Muslim countries, from Pakistan to Sudan, and will inaugurate a Global Center for Combating Extremist Ideology.The decision for Trump to give a speech about Islam, as Obama did in Cairo in 2009, seems a bit awkward. But it is designed to combat “extremism.” There is evidence that Trump’s previous vows to “eradicate radical Islamic terrorism” has been toned down in favor of the more innocuous need to fight “extremism.” The focus here is mostly on Sunni states. The Gulf Cooperation Council will be involved with a focus on conflicts in Syria and Yemen. Saudi Arabia wants to re-affirm its role as the leader of the region and Islamic world. Iran has just re-elected Hassan Rouhani, and Saudi Arabia wants to keep the focus on Iran’s threats. They also want to discuss issues relating to Israel and the Palestinians.The real story here is that Trump is doing more than a “reset” with Saudi Arabia, he wants to reset his presidency, which is being eaten away by intelligence leaks, allegations of obstruction of justice and general mayhem. The problem Trump faces is he has lost political capital back home and he seems weak. That is to the Saudis' advantage and disadvantage. The kingdom wins because Trump needs them to seem presidential, so he is willing to sign big military and bilateral deals and be engulfed in their royal robes. The kingdom loses if Trump falls in America and they are gambling on renewing the special relationship with a weakening president. It could remind one of Nixon’s visit to Egypt just before he left office.At least for two days of his presidency Trump will be in a place where he feels the grandeur that he thought would come with being president. Unfortunately for him he cannot bring back the horse guards and red carpets to Washington. He may get the momentary applause from the press for a normal foreign trip, but unless he pulls a rabbit out of a hat in Jerusalem, it’s unclear if he will get more than a momentary reprieve.