Trump’s handling of the “Stargate” controversy is not the only example of how the GOP presidential nominee has failed to speak out unequivocally against anti-Semitism and those who promulgate it. 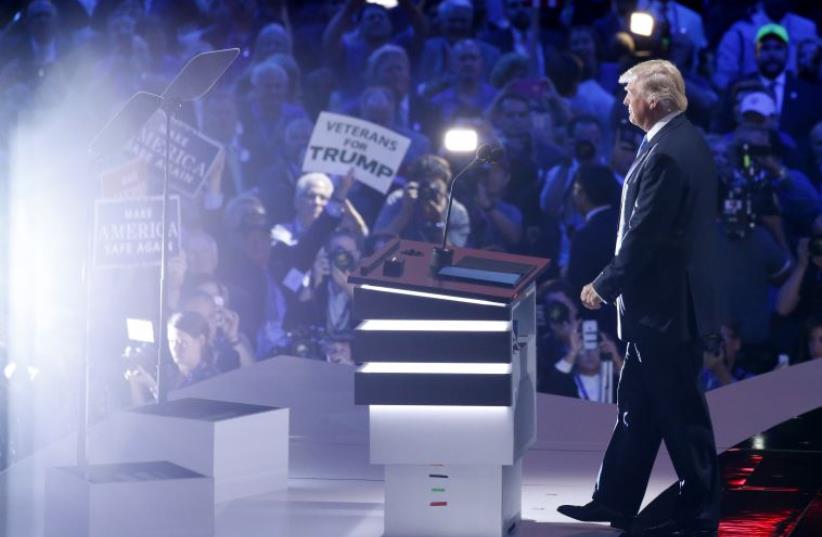 Republican U.S. presidential candidate Donald Trump appears onstage to introduce his wife Melania at the Republican National Convention in Cleveland, Ohio, USA
(photo credit: REUTERS)
Advertisement
Portraying GOP presidential nominee Donald Trump as anti-Semitic is unfair and unconvincing. The man who may become the next president of the US has publicly welcomed his daughter Ivanka’s conversion to Judaism. And there is no reason to question Jared Kushner, Trump’s Jewish son-in-law and campaign adviser, when he said recently in defense of his father-in-law that Trump is “an incredibly loving and tolerant person who has embraced my family and our Judaism since I began dating my wife.”Nevertheless, Trump’s shoddy handling of several controversies related to Jews has made him vulnerable to claims like the one leveled at him Wednesday by Democratic National Committee Chairwoman Rep. Debbie Wasserman Schultz – that anti-Semitism in the Republic Party “goes straight to the feet of Donald Trump.”Earlier this month, for instance, Trump’s social media director retweeted a graphic image of a six-pointed star over a pile of money that had made the rounds on a neo-Nazi Internet that accused presumptive Democratic presidential nominee Hillary Clinton of corruption.Trump could have transformed the initial damage caused by the “Stargate” controversy into an opportunity by using it to distance himself from anti-Semites. He could have apologized for the mistake and made it clear that he rejects outright all forms of bigotry. But he didn’t.Instead, he told a crowd of supporters gathered near Cincinnati that he would have preferred to have left the six-pointed star on the tweet’s image instead of removing it as his social media team had done after the controversy broke. He went on to accuse the media of “racially profiling” his campaign for highlighting the star and conflating it with the Star of David.Trump’s handling of the “Stargate” controversy is not the only example of how the GOP presidential nominee has failed to speak out unequivocally against anti-Semitism and those who promulgate it.After former Ku Klux Klan grand wizard David Duke said voting against Trump would be a “treason to your heritage,” Trump delayed disavowing the support, claiming he did not know who Duke was.Trump has also failed to condemn anti-Semitic vitriol on social media from his supporters against Jewish journalists who have written critically of him, such as New York Times reporter Jonathan Weisman and GQ writer Julia Ioffe.After Trump’s wife Melania criticized her April 27 profile in GQ , Ioffe was inundated with anti-Semitic messages, including a doctored photo of her wearing a Holocaust-era Jewish star, a cartoon of a Jewish caricature being shot in the head and threats to send her “back to the oven.”Once again, Trump could have used the incident to stand up against anti-Semitism. Instead, when CNN’s Wolf Blitzer, a Jew and former reporter for The Jerusalem Post, questioned Trump, he replied, “I know nothing about it.You’ll have to talk to them about it.” When pressed, Trump said, “I don’t have a message for the fans,” and added, “There is nothing more dishonest than the media.”Trump’s refusal to kowtow to the consensus or be intimidated by conventional thinking; his outspokenness; his refusal to retract controversial statements; are part of what make him so appealing for many Americans who believe political correctness has gone too far. Americans like Trump’s brutal honesty and sincerity.However, as a US presidential nominee, Trump has a moral responsibility to use that same irreverence and outspokenness to discourage expressions of anti-Semitic instead of encouraging them.Perhaps part of the problem is that Trump loathes being told what to do. Requests by journalists to denounce anti-Semites arouse Trump’s rancor and he refuses to cooperate.This stubbornness might be another character trait that makes Trump so attractive to Americans.History teaches that anti-Semitism is a potent hatred that is easy to trigger. Hatred of Jews, which has never run deep in America, nevertheless has its adherents. Trump might become the next US president and his statements have the power to influence. Trump should use this power for good by coming out unequivocally against the blind, irrational hatred that fails to distinguish between Ivanka and Jared Kushner and Ioffe, Weisman and his other critics.