So, maybe there is hope, if economic opportunity and prospects of a better life for all are part of the package. 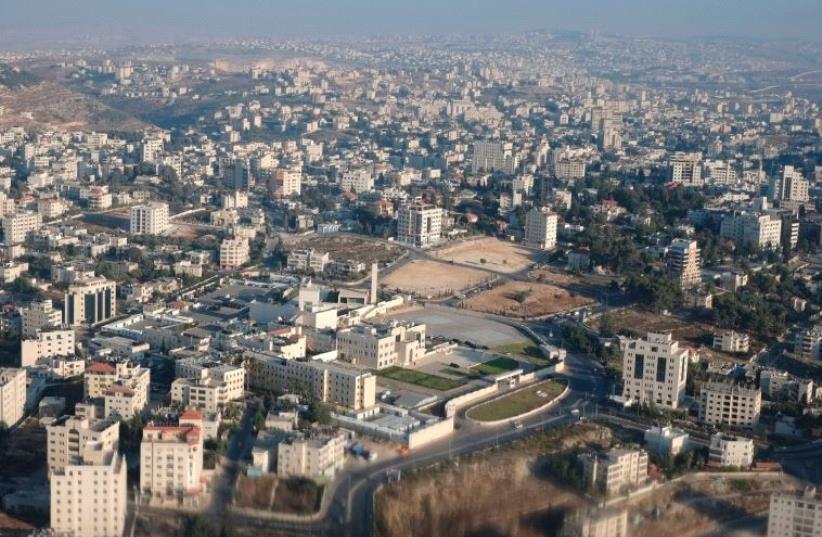 AN AERIAL view of the Palestinian Authority’s Mukata presidential compound in Ramallah.
(photo credit: REUTERS)
Advertisement
US President Donald Trump has spoken with Palestinian leader Mahmoud Abbas. Having waited on the sidelines while the red carpet was rolled out for Prime Minister Benjamin Netanyahu last month and rumors swirled about shifts in US policy, Abbas is now expected at the White House in May. In preparation, the administration’s chief international negotiator, Jason Greenblatt, paid a call on Abbas last week to gauge interest in reviving peace talks. Are these indications that the US president is serious about pursuing the “ultimate deal?”Sentiment on the Palestinian street, for one, is less than optimistic. According to a poll released by Ramallah-based pollsters PCPSR the day Greenblatt met with Abbas at his West Bank HQ, 58% of Palestinians reject a resumption of negotiations without preconditions – code for an end to settlement activity and/or a release of prisoners. And only 9% believe the Trump administration will succeed in reviving the peace process.Meanwhile, Palestinian police spent the days leading up to the Greenblatt visit suppressing protests in downtown Ramallah. Dozens of demonstrators had been demanding an end to Palestinian-Israeli security cooperation but also Abbas’ resignation, support for which stands at 64% in the same poll. This week, Abbas’ forces faced yet another shootout with militants in Nablus’ Balata Camp.Perhaps the White House sees the low bar of Palestinian public opinion and popular frustrations with Palestinian leadership as a challenge, rather than a roadblock, encouraging it to persevere where others have lost heart. Whatever the case, the Trump team will need to demonstrate high levels of patience and tolerance for distraction if it is not to burn out prematurely.The US last engaged, and subsequently burned out, during secretary of state John Kerry’s personal version of shuttle diplomacy in 2014, at a time when local polls (and headlines) were showing a Palestinian street not budging from the historic “red lines” of 1) right of return; 2) 1967 borders; and 3) a capital in east Jerusalem.As it begins its own quest, the Trump team would be well advised to pay attention to local public opinion.It has often been a constraint on Palestinian leadership, for instance, despite the latter’s authoritarian tendencies, providing ample justification for observers to question the Palestinian ability to ultimately deliver. As the old red lines are likely to be the Palestinian point of departure this time around, how then does the White House proceed, if it is to avoid its predecessors’ well-trodden paths? What the headlines tended to neglect in 2014 was that the surveys also indicated a slim majority of Palestinians at the time open to compromise, if convinced by their leaders that it was in their best interests.Of course, the challenge then, as now, was the Palestinian street’s diminishing lack of confidence in its leadership’s capacity to do anything not in its own self-interest, never mind the public interest. The opportunity for compromise, however, never presented itself in 2014, for a host of reasons, and issues of symbolic-emotional import eventually reasserted precedence over the practical.From an individual perspective, practical matters are what Palestinians are primarily concerned about these days. The reality is that negotiations and one state or two are removed from the average Palestinian’s daily preoccupations. This is not to downplay the daily impact of unresolved national issues or dismiss their communal importance, but according to public opinion it is jobs, cost of living and the economy that top daily priorities; quality of life issues familiar to politicians and electorates around the globe.What motivates or influences Palestinians is to a large extent shaped by personal experience, not just historical context. For example, 70% of the population today is under 30, the majority of whom had not yet been born when the Oslo Accords were signed. The opinion of this demographic on either the accords or even on the principle of a negotiated settlement might make for a good headline, but do the results automatically make for good policy? When surveyed last year by the Ramallah-based research firm AWRAD, Palestinians aged 18-25 overwhelmingly could recite the names of Facebook’s founder and the first winner of the Arab Super Star music competition, but struggled to recall the first and only Palestinian woman to run for president or the first head of the PLO. This is not their fathers’ generation. This generation is struggling daily with 40% unemployment rates.With respect to the issue of the two-state solution – the centerpiece of US policy for the past two decades – the “Oslo Generation” today is at best ambivalent.According to a new survey released by AWRAD this week, 48% of those aged 18-30 in the West Bank say they are opposed to two states. The reason given by the plurality for their opposition is that “facts on the ground [do not] support an economically viable Palestinian state.”The viability of a Palestinian state, or perceived lack thereof, leads 16% of youth in the same poll to opt for one state with equal rights for both Palestinians and Israelis. Whether one state or two, over 40% believe cooperation (technical, economic or educational) with Israel would be beneficial if peace were to be achieved. And recent protests against Abbas’s domestic policies aside, 41% of the surveyed youth support his approach to resolving the conflict, an increase from a year ago, compared to less than 20% who favor that of Hamas.So, maybe there is hope, if economic opportunity and prospects of a better life for all are part of the package. However, given the visible frustrations with Palestinian leadership, on one hand, and the pressures and requirements of democracy in Israel on the other, the Trump White House should have no illusions about what it will require in terms of patience and perseverance to take on this most difficult of foreign policy endeavors. But at the end of the day, it should perhaps not come as a surprise to anyone that a new US administration wants to succeed where its predecessors could not.

The author served as senior adviser in the George W. Bush State Department’s Office of the Middle East Partnership and has overseen numerous survey research initiatives in the Palestinian Authority.
Advertisement
Subscribe for our daily newsletter