Turkey’s election: A milestone in the history of Turkish politics

Turkey has much to gain from the Kurds. 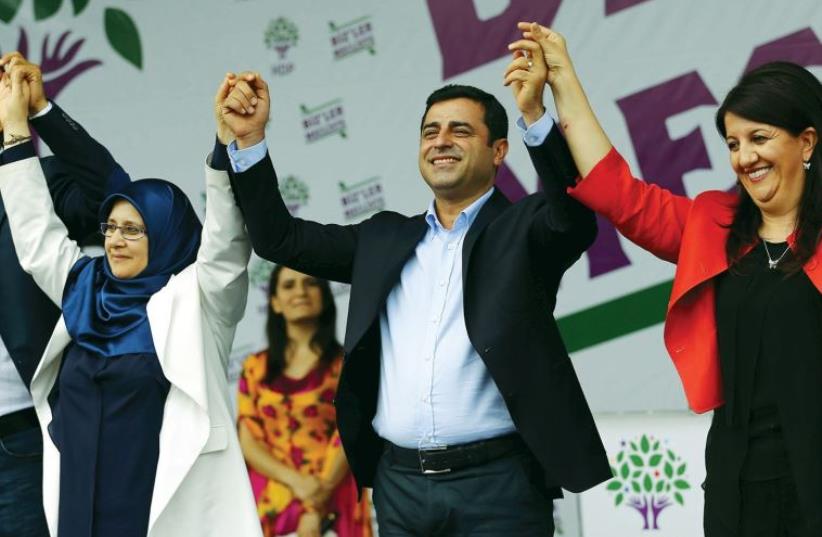 The pro-Kurdish People’s Democratic Party (HDP) entered the parliament for the first time, exceeding the 10 percent threshold with 13.12% of the votes
(photo credit: REUTERS)
Advertisement
Turkish politics has entered a new era. The outcome of the Turkish elections on June 7 was a milestone in the history of Turkish politics as the pro-Kurdish People’s Democratic Party (HDP) entered the parliament for the first time, exceeding the 10 percent threshold with 13.12% of the votes. Moreover, the ruling Justice and Development Party (AKP) loss of majority has prevented the Turkish president, Recep Tayyip Erdogan, furthering his authoritarian and Islamist ambitions. Hence, the results have created the grounds to end decades of civil war, address the Kurdish predicament and stabilize Turkey and the greater region.Undeniably, the ruling AKP has been accredited with strengthening the economy and making a number of democratic advancements. Most importantly, it embarked on a new path to resolve the Kurdish question in Turkey as it announced “the Kurdish opening.”However, the nature of the Kurdish opening has been contradictory.The Kurdish initiative was followed by the closure of the Democratic Society Party (DTP) in December of 2009, and an operation against KCK that resulted in the arrest of thousands of Kurdish politicians, including mayors and administrative officials. Further, most recently, Amnesty International and Human Rights Watch have accused the Turkish government of heavily cracking down on the media, arresting lawyers and abusing Kurdish and religious minorities.
See the latest opinion pieces on our page
On the bright side, the election results are indicative of voters’ rejection of Erdgon’s increasingly repressive rule.Hence, HDP’s victory starts a new chapter in Turkish history − while AKP’s decline will prevent Erdogan from advancing his dangerous trend toward authoritarianism and Islamism.With that said, as AKP is unable to form a majority government it is likely to form a coalition government with the more nationalist Republican People’s Party (CHP) with 25% of the votes, or the Nationalist Action Party (MHP) with 16% of the votes, or with the HDP.However, a coalition government made up of AKP with the CHP or MHP could be disastrous as it would likely end the peace process, whereas an alliance between AKP and the HDP could potentially help resolve the Kurdish question and stabilize the region.The Middle East crisis has polarized the region into two camps. On the one side there exists a Russian-led Shi’ite axis – made up of Iran, Syria, Hezbollah and the Shi’ite-led government in Baghdad. On the opposing side is a Sunni alliance among Turkey, Saudi Arabia and the rest of the Sunni Gulf States − backed by the West. This reality has turned the region into a precarious battle ground between Shi’ites and Sunnis.Having said that, Erdogan and his Islamist-rooted AKP have been accused of turning a blind eye on the foreign fighters that are entering Syria through Turkey. Further, they have been accused of providing logistic and military support to Islamic State (IS) and Jabhat al-Nusra.Turkey’s main objective in doing so, it is argued, is to weaken the Syrian regime and offset the growing influence of the Kurds and the Iranians in Iraq and Syria. Consequently, Turkey’s policy has pushed the Kurdistan Workers Party (PKK) and its affiliate, the Democratic Union party in the Syrian Kurdistan, to lean toward Iran for support. Accordingly, much of Syria and Iraq has fallen under the hegemony of IS and Iran’s influence continues to grow.To sum up, HDP’s triumph is Turkey’s golden ticket to distancing itself from Erdogan’s disastrous path, as its chauvinistic anti-Kurdish attitude and obvious support for jihadist terrorist groups will endanger Turkey’s stability and economy. For that reason, the AKP must break out of its traditional mold by forming the next government with HDP as it will establish the grounds to genuinely address the Kurdish dilemma. It is also crucial for shaping the future of democracy in Turkey and stabilizing the greater region.Turkey has much to gain from the Kurds. The Kurdistan Region of Iraq is the most stable, prosperous and democratic part of Iraq. It is one of the top importers of Turkish products and with its massive oil and gas reserves could help meet Turkey’s growing energy demands. Further, a stable and prosperous Rojava could potentially be a huge market for Turkey. Whereas, excluding the Kurds will likely end the peace process and steer Turkey towards Turkish ethnocentrism and religious extremism and further deepen the Syrian crisis, which could potentially spill over into Turkey.