“The Lord did not find a receptacle that holds a blessing for Israel but peace.” 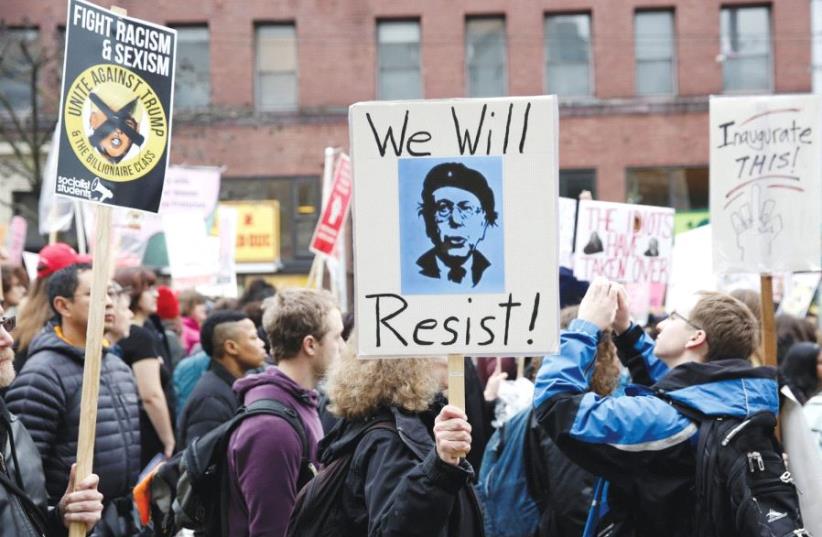 PROTESTERS HOLD up a sign urging people to ‘resist’ Donald Trump. But is some activism catering to the wrong extremes?
(photo credit: REUTERS)
Advertisement
In the aftermath of the US elections, prominent Jews have become increasingly vociferous in the protest against the president. Comedian Sarah Silverman called for a military coup to overthrow President Donald Trump, Israeli singer Noah called the president Hitler and Jewish scholars have called on Americans “to mobilize in solidarity against Trump.” As Tablet magazine put it, “From the Orthodox Union to the Reform Movement, and Commentary to J Street, American Jews speak out in defense of refugees and Muslims,” and against President Trump.It is perfectly legitimate and democratic to protest against what you think is wrong.Yet, things are different when it comes to Jews. It is one thing for Jews to choose sides. It is another thing altogether for Jews to vigorously condemn the other side with vulgar language and baseless delegitimization, as is happening in the heated debate unfolding in the US. Just as occurred after Silverman’s tweet, when Jews inflame separation they invoke antisemitism.There is nothing wrong with Jewish activism, as long as it promotes unity rather than division. Our nation was forged through unity, when individuals of different descents pledged to be “as one man with one heart.” Once they made that vow, they were tasked with passing unity on to the rest of the world, thereby becoming “a light unto nations.” When Jews disassociate from one another and thereby abandon their commitment to humanity, they cease to be a light unto nations and in so doing invoke hatred toward themselves.This is not my personal view but the view of our sages throughout the generations.Midrash Rabah writes about the Jews: “This nation, world peace dwells within it.” Tractate Yevamot of the Babylonian Talmud adds, “No calamity comes to the world but because of Israel.” Midrash Tanhuma states, “Israel will not be redeemed until they are one bundle.” And the Mishnah (Okatzin) concludes, “The Lord did not find a receptacle that holds a blessing for Israel but peace.”The Zohar (Aharei Mot) writes, “These are the friends as they sit together and do not part from one another. At first, they seem like people at war, wishing to kill one another. Then, they return to being in brotherly love. And you, the friends who are here, as you were in fondness and love before, henceforth you will also not part. And by your merit there will be peace in the world.”Not only ancient sources spoke of the importance of unity for the people of Israel and for the entire world. Our sages spoke about it throughout the generations. “The prime defense against calamity is love and unity. When there are love, unity and friendship... in Israel, no calamity can come over them,” states the Maor VaShemesh.“We are commanded in each generation to strengthen the unity among us so our enemies do not rule over us,” declares Rabbi Eliyahu Ki Tov in The Book of Consciousness.And the Ramchal wrote in his commentary on the Torah: “Moses wished to complete the correction of the world... However, he did not succeed because of the corruptions that occurred along the way.”In the previous century, Rabbi Abraham Isaac Kook and Rabbi Yehuda Ashlag, who authored the complete Sulam (Ladder) commentary on The Zohar, wrote extensively about the vital part that Israel’s unity plays in carrying out its task. In Orot (Lights), Rav Kook wrote, “The construction of the world... requires the construction of the Israeli nation... in anticipation of a force full of unity that is found in Israel.” Similarly, Rav Ashlag asserted, “It is upon the Israeli nation to qualify itself and all the people of the world to develop until they take upon themselves that sublime work of the love of others, which is the ladder to the purpose of Creation.” Finally, returning to The Zohar, the famous Tikkun No. 30 stresses that when Israel is not united, this brings about “the existence of poverty, ruin and robbery, looting, killing and destructions in the world.”Evidently, our sages are telling us that the role of the Jewish people is not to be political activists. Rather, it is to be a role model of unity. If we do this, we will bring peace upon ourselves and upon the world, since we will be “a light unto nations.”If we want to be activists, let’s act toward unity.The writer, an author of over 40 books, is a professor of ontology and the theory of knowledge, a PhD in philosophy and Kabbalah and an MS in medical biocybernetics.