When we unite and unleash that balancing power Churchill instinctively detected, the question of our right to exist in Israel will be obsolete. 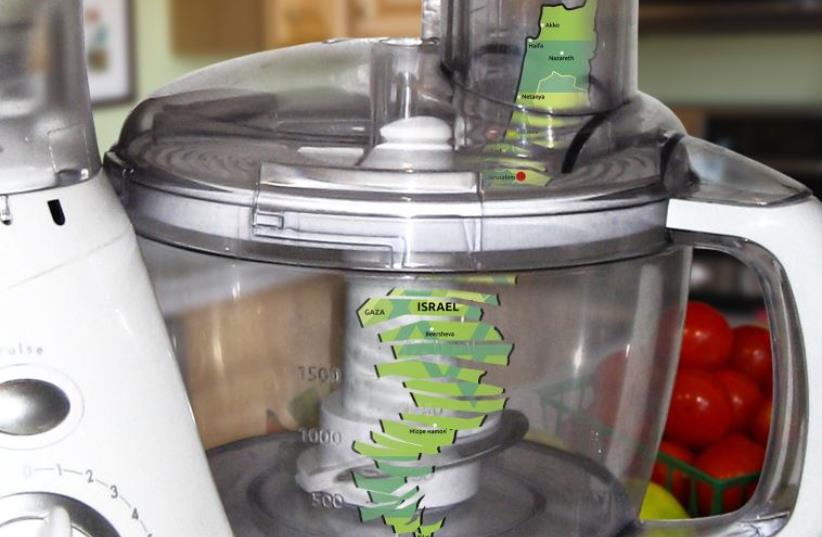 A food processor with the cut-up map of Israel inside.
(photo credit: RONO LUBIN)
Advertisement
The more chaotic the world becomes, the more it busies itself with ingenuities that aim to “resolve” the conflict in the Middle East. Lately, the world has become such a mess that even peace initiatives seem hard-pressed to coexist. Currently, the EU-backed French initiative is the world’s new darling. However, only a few weeks ago it was the phoenix-like Saudi/Arab initiative that resurfaced and grabbed the media’s attention. Now, in the midst of the rush to endorse the French initiative (and chide its critics), there emerges a pre-election peace agreement, no less, between Mahmoud Abbas and current opposition leader, Isaac Herzog, drafted when he aspired to become prime minister.Before the Six Day War, the majority of the world supported the existence of the State of Israel, some with great enthusiasm. Some countries even championed our cause during the Six Day War. On June 12, 1967, two days after the end of the war, the Der Spiegel cover item read, “Israel’s Blitz Campaign.” Evidently still charmed by Israel’s miraculous and overwhelming victory, and in line with Germany’s favorable stance toward Israel, the paper’s feature item mused poetically about the Israeli army:

“They rolled like Rommel, won as Patton, and sang at that. ‘This is a singing army. Your warriors sing like the hero of Hemingway,’ marveled war correspondent James Reston. In 60 hours the armored sons of Zion smashed the Arab encirclement of Israel. They shooed the pan-Arab prophets from their dreams of dominance, and overthrew Egypt's Nasser into the depths of the Nile. Pharaoh took responsibility for the lost war and submitted his resignation.”