A year ago, Sharansky formulated an agreement to create a pluralistic prayer section at the southern end of the Western Wall. 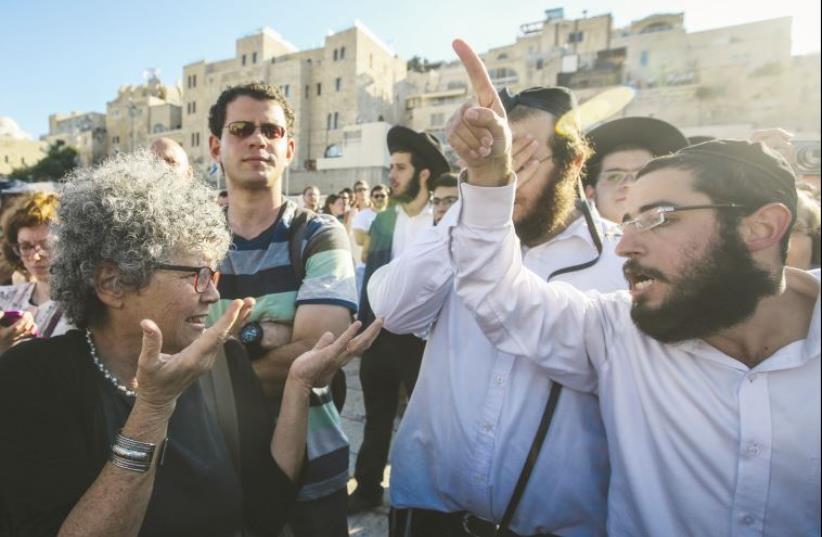 Conflict at the Kotel. Members of the Reform Movement clash with Orthodox worshipers at the Western Wall last week
(photo credit: MARC ISRAEL SELLEM)
Advertisement
Jewish Agency Chairman Natan Sharansky has agreed to extend his term by another year, upon the request of the agency’s board of governors and Prime Minister Benjamin Netanyahu, with the aim of bringing to a conclusion the dispute over the right of all Jews to pray at the Western Wall.A year ago, Sharansky formulated an agreement to create a pluralistic prayer section at the southern end of the Western Wall, which was endorsed and then frozen by ultra-Orthodox members of Netanyahu’s shaky coalition.Sharansky has been called upon to see a solution finally implemented – as if granting another extension can succeed when the ultra-Orthodox opposition to Jewish pluralism has not lessened; indeed, it has only grown during escalating confrontations over the past year.Despite Sharansky’s best efforts, nothing has changed in the coalition to warrant any optimism regarding his extended mission.“The prime minister has signaled his intention to move toward a conclusion of the matter of the Western Wall by appointing [Regional Cooperation] Minister Tzachi Hanegbi as the coordinator of this important effort,” Sharansky remarked last week.It is hard to accept Hanegbi’s latest assignment as a genuine effort to resolve a dispute that has divided the Jewish population of Israel from that of the Diaspora, rather than just another attempt by Netanyahu to stall the implementation of the Western Wall compromise agreement in face of unchanging opposition by the haredi members of his coalition.Hanegbi’s appointment must be understood in the context of his role as Netanyahu’s mister fixit. Before being assigned the most likely futile effort to unravel the knot of freedom of worship at the Wall, Hanegbi was promoted from the thankless task of being minister- without-portfolio to be minister of regional cooperation.Netanyahu then appointed him acting minister of communications in order to avoid a conflict of interest during the transition of the Israel Broadcasting Authority to the Israel Broadcasting Corporation.While now having ostensible control of as many ministries as the prime minister, the busy Hanegbi found the time to fly to Australia to prepare for Netanyahu’s recent visit Down Under. Undaunted by the IBA challenge, Hanegbi made a statement that merely hinted at the true state of affairs.In a Channel 2 interview, Hanegbi said that he would act independently, but that many factors would be taken into consideration. “I am not working alone here,” he said. “The cabinet is like an orchestra with a conductor, and we want to forge harmony and not an unpleasant tone.”On the contrary: The cabinet is more like a discordant jam session, whose dissonant tone has the entire country on edge. Hanegbi’s latest rescue mission to save the status quo on Netanyahu’s behalf recalls his previous appointment by the premier in July 2016 to head yet another investigation of the alleged theft of hundreds of babies who were stolen from their mothers and put up for adoption in the early years of the state.It is not surprising that Hanegbi has so far not succeeded where three parliamentary inquiries have failed, in 1967, 1988 and 2001. This is hardly an endorsement of his chances for succeeding to square the vicious circle of coalition politics.Passing the buck once again to Sharansky and Hanegbi cannot gain Netanyahu anything but a welcome, if shortsighted, distraction from the myriad challenges to his leadership, from police investigations to annexationist ministers who revel in stirring controversy over settlement policy – or non-policy.And while controversies brew, the scene at the Kotel continues to escalate. Haredi hooligans this week again disrupted the service by the Women of the Wall celebrating the new Hebrew month of Adar, jostling women worshipers and bringing national-religious high-school girls to heckle fellow Jews asserting their right to pray in peace.It is time to pull Israel out of this intractable conflict.As qualified as Hanegbi might be, Netanyahu first has to stop catering to the haredi members of his government.Only then will true compromise be possible.