We rail on Trump’s temporary immigration proposals while ignoring the vilest anti-Semitic hate speech and Muslim supremacism of the PA, which receives over $500 million annually from the US tax-payer 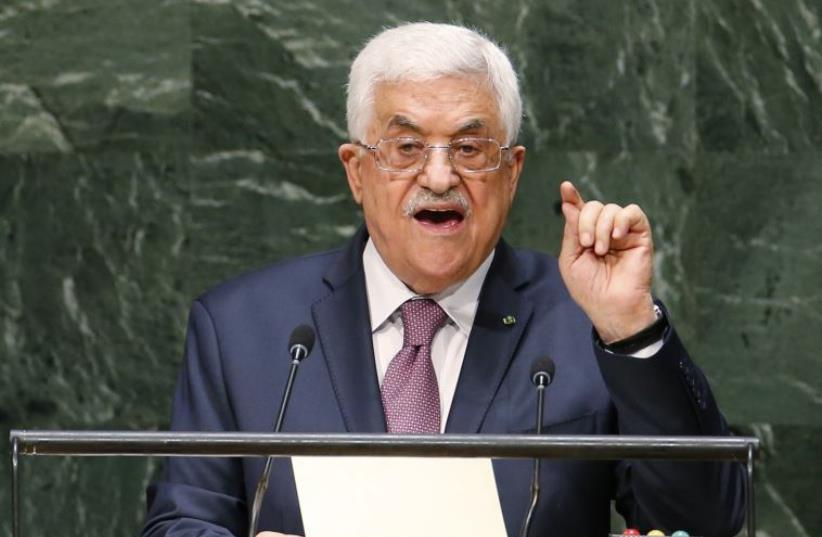 Palestinian President Mahmoud Abbas addresses the 69th United Nations General Assembly at United Nations Headquarters in New York, September 26, 2014
(photo credit: REUTERS)
Advertisement
A major uproar exploded across the political scene recently when Republican presidential candidate Donald Trump called for “a total and complete shutdown of Muslims entering the United States.” Conversely, there has been a remarkable, deafening silence on the official position proclaimed by Palestinian Authority (PA) president Mahmoud Abbas: “If there is an independent Palestinian state with Jerusalem as its capital, we won’t agree to the presence of one Israeli in it.”“Israeli,” of course, means “Jew.” Abbas has no problem with Arabs who hold Israeli citizenship living in a Palestinian state. This is purely a racist policy aimed at ensuring the absence of Jews, because they are Jews. And Abbas is in power; Trump is not, so Abbas’s statement has real meaning.This Palestinian policy has been reiterated by senior figures like PA top negotiator Saeb Erakat (who recently refused to address a New York conference unless the flag of Israel, the country he claims to recognize and with which he asserts in English a desire to live in peace, was removed).It has also been reiterated by former PA ‘prime minister’ Ahmad Qurei; PLO ambassador Maen Areikat; and putative moderate academic Sari Nusseibeh, who even went so far as to explicitly urge that Jews be ethnically cleansed from the eastern half of Jerusalem.Many, ourselves included, think Trump’s suggestion to exclude any and all Muslims from coming to America excessive and ill-conceived. For all that, some proportion is in order. Trump was speaking of a major security threat and was proposing an explicitly temporary measure (“until our country’s representatives can figure out what is going on”).After all, the refugees pouring out of Syria pose a national security problem.According to FBI Director James Comey and National Intelligence Director James Clapper, the minority of Islamic State hardened jihadists and ISIS supporters among them are largely undetectable.Unlike Trump’s proposal, this Palestinian policy is not proposed as a temporary measure. Nor is it about responding to security threats. It’s about excluding Jews, about a future state of Palestine being judenrein.In short, the PA policy is one of unadulterated Jew-hatred.The same glaring anti-Israel contradiction emerges in other guises. When Israeli Prime Minister Benjamin Netanyahu stated during his 2015 election campaign that a Palestinian state couldn’t be created under current conditions, the international outcry, including from President Barack Obama, was loud and relentless.Compare that to Obama’s reaction in March 2014, when Abbas told Obama that he will neither accept Israel as a Jewish state, nor conclude a comprehensive peace if it means signing an ‘end of claims’ clause. How did Obama react? He praised Abbas for having “consistently renounced violence... consistently sought a diplomatic and peaceful solution that allows for two states, side by side, in peace and security.”Or again, compare that to this past September, when Abbas told the UN that the Oslo Accords were dead. There was no sputtering of outrage, no dressing-down from Obama, no threat to curtail US aid to the PA. There was none again this week, when the State Department was informed of PA pensions to Jew-murdering terrorists and their families. Rather, it ignored this, saying that the need to “calm current tensions” somehow required leaving open the PLO’s Washington office, even as the PA is funding and promoting the murder of Jews.Compare too, the international silence over Abbas’ incitement of the recent wave of Palestinian violence and terror attacks in Israel.Abbas not only falsely alleged that Jews were conducting a “fierce attack … against al-Aksa Mosque,” but also urged Palestinians to prevent Jews visiting Judaism’s holiest, site, Jerusalem’s Temple Mount, saying “The al-Aksa [Mosque] is ours ...and [the Jews] have no right to defile it with their filthy feet ... We bless every drop of blood that has been spilled for Jerusalem ... blood spilled for Allah.”Last week, Abbas described the daily onslaught of stabbings, car-rammings and other murders, claiming the lives of 24 Jews, as “justified popular unrest.”Had Abbas’ words, suitably adjusted, been uttered by an Israeli leader, newspapers around the world would carry detailed reports on their front pages; parliaments around the world would vote to condemn him and the society that tolerated such words; human rights organizations would organize petitions and rallies condemning Israel; international leaders would issue statements of condemnation and the United Nations would surely be called into special session to consider formally condemning Israel in the harshest terms.Today, however, we rail on Trump’s temporary immigration proposals while ignoring the vilest anti-Semitic hate speech and Muslim supremacism of the PA, which receives over $500 million annually from the US tax-payer.Such is the combination of indifference and acquiescence to Jew-hatred and fear of offending Muslims in which we debate vital matters. Presumably, we will still be arguing in this vein when terrorists strike next, here and in Israel.

Klein is national president of the Zionist Organization of America. Mandel is director of the ZOA’s Center for Middle East Policy and author of H.V. Evatt & the Creation of Israel.
Advertisement
Subscribe for our daily newsletter