Washington Watch: Let us elect our own president

If it were up to the American people, Donald Trump would be the one standing outside screaming “rigged election” and bellowing his familiar angry attacks and name calling at president Hillary Clinton 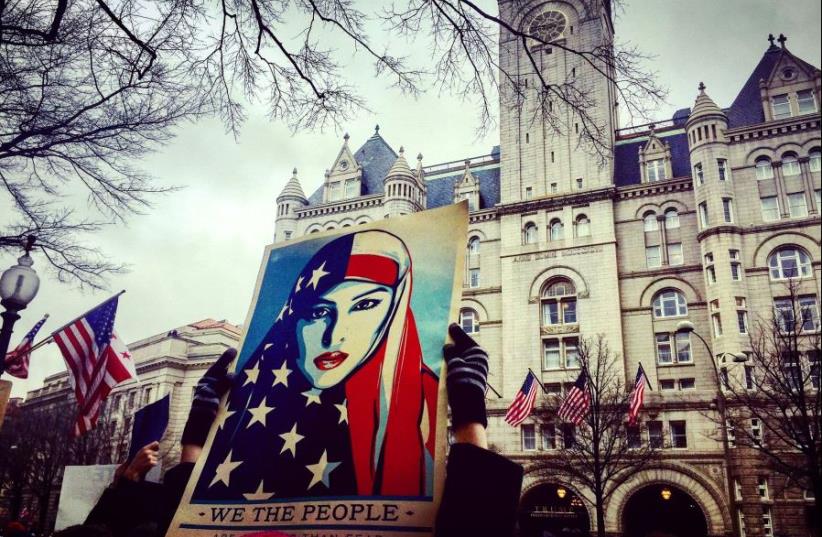 Protesters opposed to Donald Trump rally at Trump International Hotel on his inaugural parade route in Washington, DC.
(photo credit: MICHAEL WILNER)
Advertisement
If it were up to the American people, Donald Trump would be the one standing outside screaming “rigged election” and bellowing his familiar angry attacks and name calling at president Hillary Clinton.A year ago this week, Trump lost by the largest popular vote margin in history, but won the presidency thanks to that 18th century anachronism, the Electoral College. It was the second time in the past five elections the ultimate winner lost the popular vote. George W. Bush lost it in 2000, and in the 19th century, three presidents did also – John Quincy Adams, Rutherford B. Hayes and Benjamin Harrison.The Electoral College once again thwarted the will of the majority and proved why it should be abolished and the American people allowed to elect their own president.Trump is too vain to admit it, but the reality is Clinton got nearly three million more votes than he did, and another two million went to third party candidates. He insists that millions cast illegal votes for his opponent, but a year after the election he hasn’t produced a shred of evidence to support that claim. Instead he established a bogus commission on “Election Integrity” that critics say was designed to erect barriers to the polls for African-Americans, Latinos, immigrants, the elderly, the poor, students, the disabled and other groups considered likely to vote Democratic.In 2012, when he thought Barack Obama would lose the popular vote, Trump called the Electoral College “a disaster for democracy,” but when that didn’t work out, he praised the “genius” of the system, reported The Independent.Most Americans are unaware that when they go to the polls every four years they don’t really vote for president but for electors pledged to a candidate. With rare exceptions those electors do as they’re supposed to, but once in a while they go rogue and vote for someone else (in 2016 that included Colin Powell, John Kasich, Ron Paul, Bernie Sanders and Faith Spotted Eagle). None ever changed the outcome.The Electoral College was established by Article 2 Section 1 of the Constitution, and can only be removed by an amendment approved by two thirds of both Houses and 38 states. Until 1913, senators were chosen by state legislatures; the 17th Amendment mandated their direct election.It took nearly two centuries for the Supreme Court to enshrine the principle of one person, one vote in elections to the House of Representatives.In all 50 states the chief executive, the governor, is directly elected by the people.Under our present winner-take-all system, a candidate can lose the popular vote in big states like California, Texas and Florida by a single vote and thus lose all of the state’s electoral votes. With direct election, the outcome would be more representative and fair.Small states have disproportionate influence in presidential elections.California, with 39.3 million people, has 55 electoral votes (one for each member of the House and Senate per state), which comes out to one for each 709,000 citizens. By comparison, Wyoming, with the smallest population, 585,501, has three electoral votes, or one for each 195,000 citizens.In other words, voters in small states carry double and triple the influence of those in more populous states.In Texas, the largest red state, each electoral vote translates to 724,000 popular votes; in Vermont, the smallest blue state, the ratio is 1 to 209,000.Seven states and the District of Columbia have three electoral votes each; five were in the Republican column. Trump won 30 states.Ending the current winner-takes-all system means no candidate would go away empty handed and the outcome would more accurately reflect the will of the voters. Another advantage would be that with more than 136 million votes being cast, there is less likelihood of a tie election being thrown into the House of Representatives.Republicans may want to preserve the Electoral College because of their strength in small states and their loss of the popular vote in two recent elections. With winner-take-all removed, they would have an incentive to compete harder in blue states like California and New York because they wouldn’t come away empty handed.In the two biggest presidential election blowouts of the 20th century, 1972 and 1984, Republicans Richard Nixon and Ronald Reagan, respectively, won the electoral votes of 49 states each, but only 60% of the popular vote.As a step toward repeal, states could follow the example of Nebraska and Maine, which apportion their electoral votes by congressional district.One major voting bloc that could lose influence if the Electoral College were abolished is Jewish voters.“Going to the popular vote could potentially dilute the influence of the Jewish vote, which can be decisive in close votes in swing states under the current winner-takes-all Electoral College,” said Louise Stoll, longtime Jewish activist and former executive vice president of the United Jewish Communities. “But, more important, it is better for the Republic, Jews and non-Jews alike.”Direct election of the president isn’t the only reform needed. Last year 136,669,237 Americans voted for president, just under 60% of eligible voters.Instead of his fraudulent voter integrity commission trying to make voting tougher, Trump should be working to expand citizen participation.A good start would be making Election Day a national holiday, offering same-day registration and shortening primary and campaign periods (for the latter, take a look at Israel, Britain and Canada).“The most important public office in this country,” Stoll noted, “is the one where the winner is not decided by counting equally every vote cast, and it needs to change.”It’s time for a 28th Amendment giving the American people the power to elect their own president.