Watch! One simple way this New Year can be different

With Rosh Hashana upon us, we can take a cue from Passover and the well-known line from the evening Seder: “Why is this night different from all other nights?” 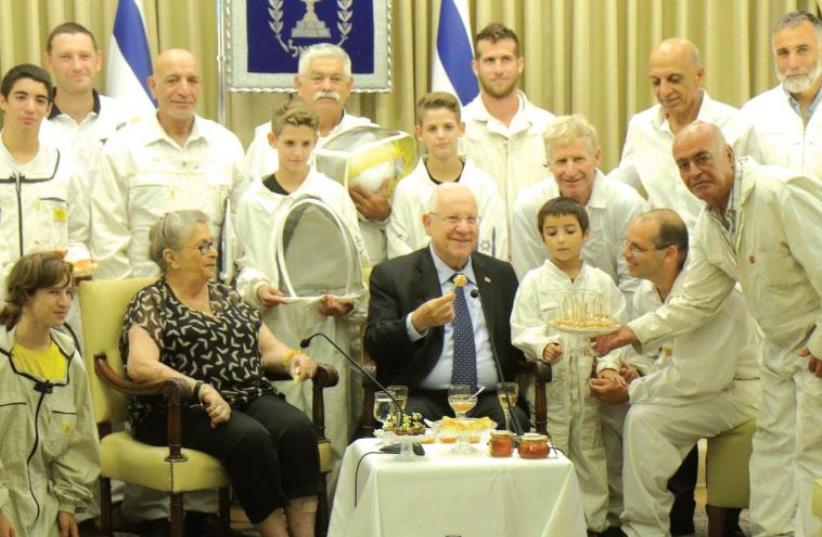 President Reuven Rivlin and his wife, Nechama, host beekeepers in a festive Rosh Hashana gathering at their Talbiyeh residence
(photo credit: HILLEL MEIR/TAZPIT)
Advertisement
With Rosh Hashana upon us, we can take a cue from Passover and the well-known line from the evening Seder: “Why is this night different from all other nights?” It is usually the youngest child at the table who recites the answer (to the great pride of his or her parents) and is symbolic of one of the major themes of the evening: encouraging Jewish children to ask questions.As with the High Holy Day liturgy, the Passover Haggada (which tells the story of the Exodus), was written many centuries ago when most Jews observed Jewish law and tradition.The “night” line was written on the assumption that even the youngest child would be familiar with the daily Jewish rituals and customs, would therefore notice the difference... and ask.Times have changed.Nowadays, an estimated 30-50 percent of American Jewish children do not sit at a Seder table – let alone know what to ask – and even fewer attend synagogue or temple on Yom Kippur.Let’s face it, the majority of US Jewry is losing its connection to Jewish community and to the Jewish people.As the 2013 Pew report “A Portrait of Jewish Americans” notes, this is largely due to rising intermarriage, low birthrates, high rates of non-marriage and late marriage. Only 7% of the grandchildren of those who intermarry are raised as Jewish-by-religion.Why? Could it be the way we’ve been telling the story? For example, what does the average Jew know about Rosh Hashana and the High Holy Days? Apples and honey? Never-ending prayer services? Fasting? Anything else? Do they know that Rosh Hashana is a huge opportunity for self-realization, Jewish engagement and meaningful change? It’s an opportunity to take stock as individuals and as a people.And it’s a time to ask the big questions: What is my life all about? What is my personal mission statement? What is the Jewish people’s role in the world? What are we doing right and what are we doing wrong? Where do I fit in? And perhaps most urgently this year – in light of the Pew report, rising anti-Semitism on campus, genocidal threats from Iran and a dearth of Jewish-leader role models – how can we connect young Jews, for whom Seder Night and Rosh Hashana are just like any other night, to their Jewish identity? Why should they be Jewish? There are many organizations from all streams of Judaism working to increase Jewish involvement. Yet the statistics on Jewish self-identification continue to drop.But here’s another statistic that could change the game...“A minute of video is worth 1.8 million words.” (Dr. James McQuivey, Forrester Research) Whether that’s a clever way of saying one picture is worth 1,000 words or not, it really does highlight the incredible power of film.The message is clear.We have a huge opportunity right before our eyes.In the most visually literate generation in history – in which most young Jews have access to Facebook, You- Tube, Instagram, Netflix and more – the key to Jewish engagement and education may just be a screen away.Savvy businesses and marketers know that videos and film register more deeply into the memory. They can be cool, sharp and timely. They can grab attention, arouse emotional responses and spark action. And, most important, they can go viral and reach mass target audiences at minimal cost.So I have a simple suggestion for Jewish educators, organizations and anyone else concerned about the lack of Jewish engagement among our teenagers and students.As we start our educational “pre-production” for another New Year, let us figure out how to use more film and digital education in our programming.Because if our kids have never seen a Haggada or a Shofar, have never seen relevant Judaism in action, do not see any difference in their lifestyle and values compared to their non-Jewish peers...then for sure their own Jewish screens will be blank.This Rosh Hashana, we can change all that.Let’s turn those screens on.The author is CEO and founder of Jerusalem U. He is the producer of Beneath the Helmet, Israel Inside: How a Small Nation Makes a Big Difference, Crossing the Line and several other educational films.