We have returned from Babylon

In the face of existential threat, we Jews will not depend upon an edict from the king, the president of the United States, or the international community to defend ourselves. 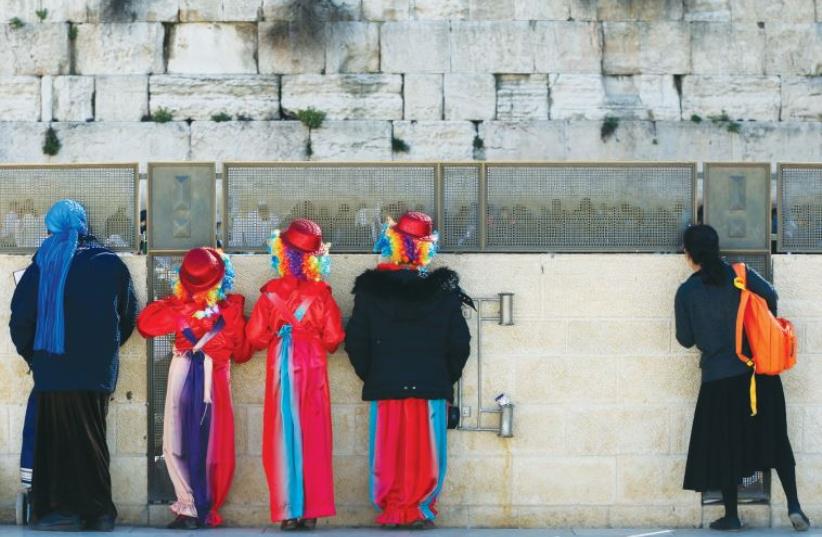 Children in costumes visit the Western Wall last Purim
(photo credit: REUTERS)
Advertisement
The Scroll of Esther we read on Purim recounts the events that transpired during the Jews’ exile in Babylon.These Jews, including the story’s protagonists Mordechai and Esther, who were captured and driven into exile by the Babylonians, had once known political independence.Many had presumably fought, albeit unsuccessfully, to defend their people and their homeland. Until their defeat they had been free citizens of an independent, sovereign nation. In Babylon these Jews were no longer self-governing. They became the subjects of a foreign ruler, King Achashverosh, or Artaxerxes.Perhaps the most significant implication of their new situation is borne out by the Purim narrative. Chapter 3, verse 13 relates the king’s infamous edict that he issued in response to the petition of the evil court overseer Haman. In it the king orders his subjects “to destroy, kill and eradicate all the Jews, from young to old, infants and women, on one day – the thirteenth of the twelfth month, the month of Adar, and to plunder their wealth.”Because of Esther’s intervention and appeal to the king to save her people, including the revelation that the entire matter was contrived by the nefarious Haman, the Persian monarch experiences a change of heart. He issues a second declaration, through Mordechai, of which we read in chapter 8, verse 10: “He wrote it in King Achashverosh’s name and sealed it with the king’s signet ring. He sent the letters by couriers on horseback, riding mules bred of mares from the king’s stables [saying] that the king had allowed the Jews of every city to gather and stand up for their lives.”Had this second edict not been issued, what would the Jews have done? Would they, out of fealty to King Achashverosh, have stood passively and consented to their own mass slaughter? Did they really feel the need to receive permission from the king to defend themselves? We will never know since the Jews prevailed over those who would have slaughtered them.Throughout nearly two millennia of Diaspora existence, whether it was the persecution of Jews by the early Church fathers, the mass murders during the 11th and 12th centuries’ Crusades, the Spanish Inquisition of the 14th and 15th centuries, the 17th century Chmielnicki massacres, the 19th and 20th century Russian pogroms or the genocidal programs of the Nazi and Soviet regimes, Jews lived at the mercy of others.Whether victimized by a drunken gang of local kulaks or systematically murdered by the state, our fate lay in the hands of others.That changed in May 1948 with the rebirth of a sovereign and independent State of Israel. As a result, we Jews no longer require others’ permission to simply defend ourselves against those seeking our destruction.This new reality is, however, not without its problems. Due to our long history of helplessness, as well as the theological belief among certain Christians and Muslims that Jews are to be denied sovereignty, the image of a strong Israel rankles. While some people in the world still see and admire Israel as a feisty little survivor surrounded by numerous enemies, others interpret the lengths to which the Jewish state goes in order to survive as defiant and even arrogant. These are people who, if pressured, are likely to admit that they have a problem with Jews wielding power.Today the Jewish people are threatened by Persia. The mullahs of Iran, as well as that country’s military leaders, are quite open about their aspirations to bring about the physical end of the state of Israel. Just last week a photo appeared throughout the news media of an Iranian-made Qadr H ballistic missile on whose side was painted the Hebrew message “Israel must be destroyed.”In the face of such a real, existential threat, we Jews, in this case the modern State of Israel, will not depend upon an edict from the king, the president of the United States, or the international community to defend ourselves. If, in time, it becomes apparent to Israel’s leaders that the deal with Iran brokered mainly by the United States to limit this confrontational Shi’ite theocracy’s development of nuclear energy does not unequivocally defuse the threat, we Jews will not stand passively by awaiting our destruction. We have returned from Babylon.

The author lives in Efrat and is the founder and director of iTalkIsrael.
Advertisement
Subscribe for our daily newsletter