Welcome to Israel: Photoshop not welcome

It was on the journey to Italy that I gazed at the vertigo-inducing Leaning Tower of Pisa. 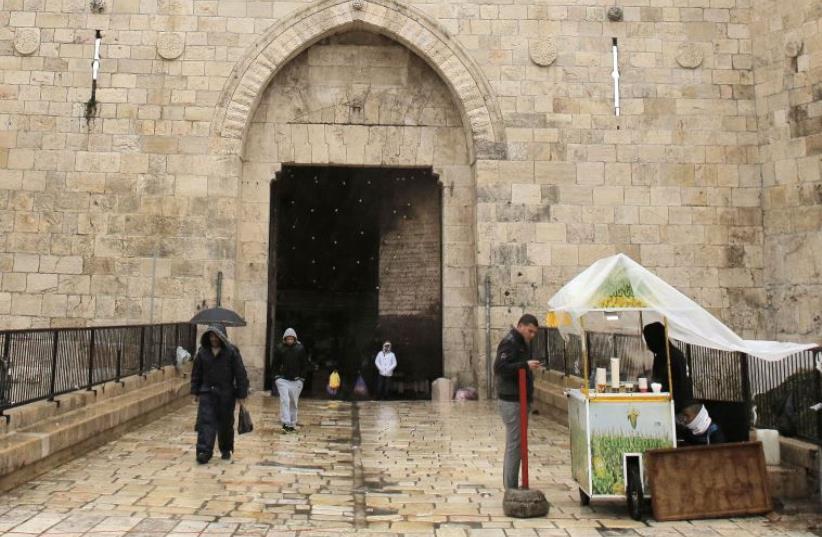 A man buys street food as it rains near Damascus Gate in Jerusalem's Old City
(photo credit: REUTERS)
Advertisement
It was on my sojourn in France that I saw the artfully-decorated halls of the famed Musée du Louvre.It was on the journey to Italy that I gazed at the vertigo-inducing Leaning Tower of Pisa. It was a road trip to Canada that brought me face to face with an angry moose (more on that particular tale a different time). But these global excursions all paled in comparison to my experience in Israel.The eternal Jewish homeland.The land overflowing with milk and honey.The hallowed soil the biblical patriarchs and matriarchs stood upon, where the David Ben-Gurions and Moshe Dayans and Golda Meirs of the world carved their unmistakable niches in history, and where approximately 6,335,000 contentious Jews live side-by-side in a crowded little country, smaller than the State of New Jersey.Yup, it’s got all the makings of a deformed Hitchcock film.As with all things involving anxious Jews and accurate clocks, the El Al flight from JFK to TLV departed according to Jewish time – exactly one hour late.Stuffed inside that semi-cylindrical, fully-pressurized sardine can of airplane cabin sat a United Nations of The Circumcised. The fellow to the right of me had long, thick brown side curls dangling from an otherwise gleaming, hairless scalp.The gentleman to the left of me was wearing white pants, a white shirt and white skullcap. Did I mention his hair was also white? Our El Al captain was clearly a former IDF fighter pilot who no doubt was convinced there were six Russian MIGs hot on his tail – or at least it felt that way, as we bumped and bounced and bobbled across the crowded cabin for 12 hours straight.After flying The Friendly Skies of Turbulence, we exited the airport just in time to make it to the Israeli version of the Daytona 500.May I add that all the cars partaking in this frenzied race happened to be driven by raucous taxi drivers sporting hairy chests, gold Magen David necklaces and seats littered with sunflower seeds? But enough about me... let’s talk about The Promised Land.The azure blue sky.The pitted stone streets.The bristly palm trees.All dotting the rocky topography of a territory encompassing religion, rebellion and relaxation; the Hebraized Mecca of conflict, consternation and calmness, fused into an astonishingly diminutive landscape consisting of some 20,000 square kilometers.You read that right: 20,000 sq.km.And the folks at Rand McNally do not make mistakes.But the real beauty of Israel was not found in the soaring skyscrapers of Tel Aviv or luxury hotel resorts of Eilat or historic museums of Jerusalem.It was found in the people.The beleaguered beggars standing at the Jaffa Gate who shower passerby with warm blessings of health and wealth. The weary yet welcoming shopkeepers who enjoy haggling with shoppers more than they enjoy making actual sales. The brave Israeli soldiers, decked out in olive-green fatigues, whose furrowed faces show a complex concoction of mellow and muscle.The righteous men and women and boys and girls of this Jewish country who proudly forge ahead, tiptoe around the endless obstacles, and work hard to create a welcoming home for their fellow brethren after 2,000 long years in exile.You can’t capture this heartfelt feeling in a glossy brochure. Clever copyrighting alone cannot convey the true depth of this emotion. Even photos taken with a newfangled Nikon D800 DSLR camera do not come close to doing justice.While the Nations of the World may rightfully salute their towering edifices, gaudy monuments, fancy museums and more – it boils down to nothing more than a smoke-andmirror show for tourists. The attractive brochures printed by the departments of tourism in France and Italy and Spain and Germany and Sweden may be artfully designed and boast the latest in Adobe Photoshop coloring techniques. They’ll highlight amazing architecture and lush landscapes and epicurean eateries.But is it real? Does it depict the glorious heritage, authentic culture and inherent lifestyle of the people inhabiting the land? Israel is genuine.Show me the cracked, tear-stained, pockmarked stones of Jerusalem’s famed Western Wall. Show me the narrow, winding, cobblestone roads leading to the tombs of the mystical kabbalistic giants buried in Safed.Show me the creaky roofs and buckling walls and rickety windows of the homes of countless pious Jews across this glorious land who want nothing more than to study the word of God and faithfully keep His holy Torah – in peace and harmony and solitude.My part-spiritual, part-marketing, wholly-genuine takeaway? You can design funky tourist brochures and creative sightseeing videos and sizzling social media campaigns and award-winning print ads.But you can’t Photoshop authenticity.The writer is marketing director at Ptex Group, an Inc. 500|5000-ranked marketing agency headquartered in Brooklyn, New York. His musings have been featured in literary magazines and on various industry blogs.