Comment: What Bernie Sanders overlooks when he talks about Israeli proportionality

The behavior of a democratic society seeking peace and security, and that of a terrorist organization devoted to death and destruction never can be viewed through the lens of moral equivalence. 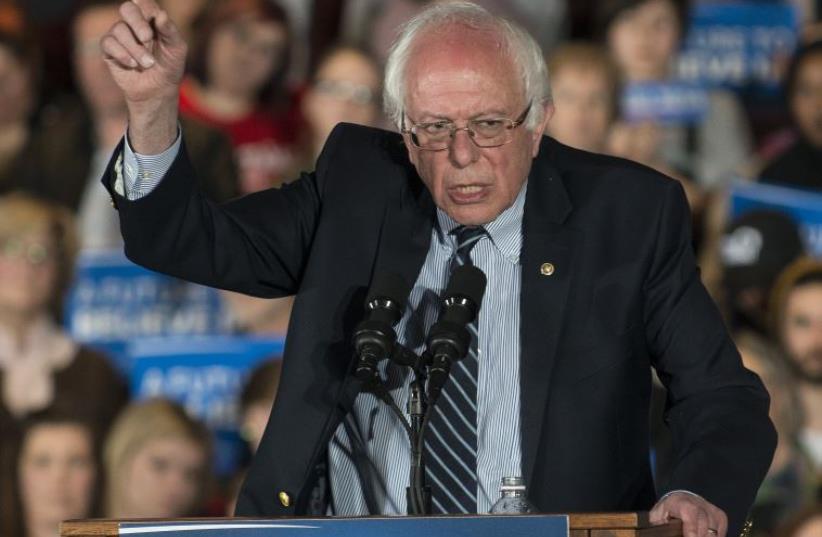 Democratic presidential candidate Sen. Bernie Sanders (D-VT) speaks to a crowd of supporters at the Mayo Civic Center on February 27, 2016 in Rochester, MN
(photo credit: STEPHEN MATUREN / GETTY IMAGES NORTH AMERICA / AFP)
Advertisement
For most of the 2016 Presidential campaign, foreign policy issues have played a secondary role, but Democratic candidate Bernie Sanders’ response to questions about the Palestinian-Israeli conflict has generated considerable attention on the eve of the New York primary.Recently, Sanders threw around random numbers with respect to civilians killed in the 2014 war between Israel and Hamas, the terrorist organization ruling over the Gaza Strip. Confusion about the precise figures is not disqualifying, but even more troubling than having only a distant familiarity with one of the most high profile issues a sitting US Senator confronts is the language Sanders chose to criticize Israeli conduct in its war of self-defense.Sanders is among those who argue for a “proportional response” to terrorists. This is a notion many find baffling, as the merciless attacks by terror groups focus overwhelmingly on their attempts to murder as many innocent civilians as possible. In such a political and military context, one wonders what the advocates of proportionality really mean given Webster’s definition of “having a size, number or amount that is directly related to or appropriate for something.”Surely the proportionalists can’t mean that the sheer number of deaths on both sides have to be the same; if so, why did Sanders vote for the US to help fund the Iron Dome system that managed to repel the thousands of rockets Hamas launched at Israeli population centers? Nor could the proportionalists like Sanders mean that Israel’s military should aim to annihilate the Palestinians in a way that is “directly related” to Hamas’ stated goal of wiping out not only Israel, but Jews everywhere.And it’s impossible to conceive that proportionalists believe Israel must adopt Hamas tactics to dig tunnels under Gaza for the purpose of popping up among Palestinian civilians to either slaughter them on the spot or drag them away as hostages.No, proportionalists can’t mean what they say. Those who aren’t simply making a vapid argument as a cudgel against Israel are expressing the idea that combatants ought to do everything possible to minimize civilian casualties, and that both sides in a conflict should not act in ways that unnecessarily ratchet up death and destruction. That is a laudable goal.It’s the kind of behavior that leads the Israel army to provide warnings to civilians of an impending bomb, alerting them to vacate a building. Contrast that with Hamas terrorists placing their central command and control facility in the basement of Gaza’s Shifa hospital.Yet, if Sanders and the proportionalists don’t mean what they say in wishing for more perfectly aligned symmetry in death totals, they suffer from the desire to find a moral equivalence between the two sides, one they believe allows for political progress in an objectively fair environment.But the behavior of a democratic society seeking peace and security, and that of a terrorist organization devoted to death and destruction never can be viewed through the lens of moral equivalence. The endless pursuit among some politicians to find the common thread of humanity between liberal democracies and divinely inspired murderers is a fruitless exercise.None of this is to suggest that Israel is above criticism. If Bernie Sanders or anyone else wants to make a cogent argument about how Israeli leaders have missed opportunities to ease tensions, or how Israeli society could do more to live up to its promise, he or she will have to get in a very long line of Israelis who have no compunction in taking advantage of their right to express themselves in ways none of their neighbors can imagine.Israeli leaders for nearly 68 years have confronted wars designed to extinguish the Jewish state. From its first day of existence, Israel supported the “two state solution,” later practically begged Jordan’s King Hussein not to enter the 1967 war that led to his loss of West Bank territories that Israel did not covet, and offered multiple peace treaties that never even drew a single counterproposal by Palestinians.These are facts that the proportionalists never address. It’s very late for Senator Sanders to begin thinking about these issues, but he owes it to the voters to provide an explanation about how his devotion to proportionality would guide his policies should he end up sitting behind the desk in the Oval Office.The author is President of the American Jewish Congress.