Thanks to the matza campaign of 1865, the unbreakable ties between the Jews of the North and the South had already begun to be rebuilt. 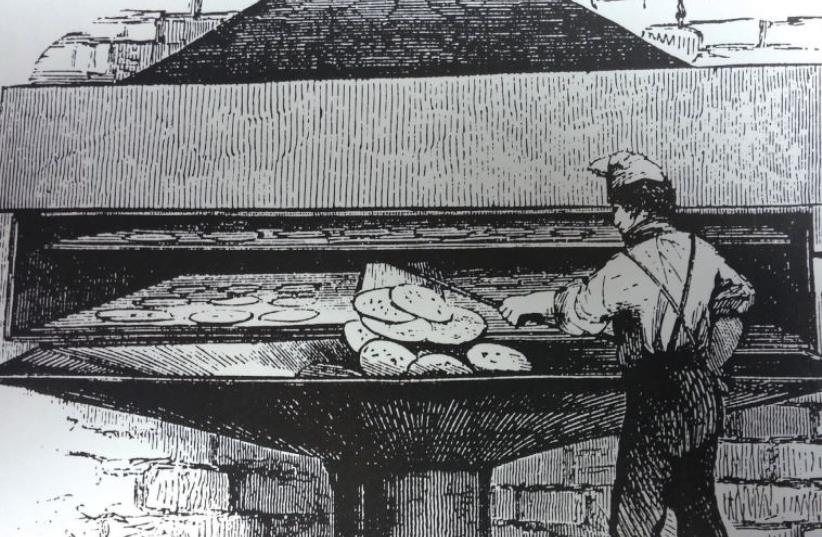 AN ILLUSTRATION from 1858 of matza being made in a New York bakery on Division Street owned by Mark Isaacs
(photo credit: AMERICAN HERITAGE HAGGADAH)
Advertisement
During the American Civil War, the 600 Jews living in Savannah, Georgia, experienced plenty of hardships, just like the gentile community around them.But when Jewish baker A. Borchet closed his establishment in the fall of 1864 due to the absence of his sons fighting in the Confederate Army, the only source of matza for the community dried up.Established in 1733, the same year James Oglethorpe founded the colony of Georgia, the Jews of the Savannah community were noted for their role in the Revolutionary War, and many young Jews enlisted in the Confederate Army for the war that tore the North and South apart.In September 1864, Maj.-Gen. William Tecumseh Sherman of the Union Army had already burned Atlanta to the ground, and in December, he and his forces captured Savannah, providing Abraham Lincoln with a nice “Christmas present.”As 1865 dawned, a member of the Mikve Israel synagogue, N.J. Brady, looked ahead to Passover and realized that he and his fellow Jews would be “matzaless.” What to do? Putting rebel pride aside, Brady turned to two “Yankee” Jews, Rev. Isaac Leeser of Philadelphia and Myer Isaacs of New York, asking for assistance. They, in turn, recruited Rev. J.J. Lyons of Shearith Israel Synagogue in New York.The Jewish Messenger, a weekly paper in New York, reported on March 15 that Lyons had been apprised of a request from Brady for 500 pounds of matza. His shul donated $100 and it recruited more funds after the paper praised the Savannah Jewish community’s helpfulness in charity campaigns in the past.Eventually 35 synagogues, companies and individuals contributed $502.90 for the baking of 3,000 pounds of matza.Lyons then placed an order with matza baker Mark Isaacs, who ran a bakery on Division Street in New York City.The unleavened bread was placed aboard the US Grant steamer in New York harbor. The sailing southward was not difficult because the Union controlled the naval lanes through the Atlantic Ocean.It was never known if the matza ever arrived, until the recent discovery of an article titled “Matzah Passover Bread” in the March 30 edition of The Savannah Daily Herald.“This morning 13 cases of Matza Passover Bread were received by the steamer U.S. Grant. The bread, a contribution of the Israelites of the north to their brethren in Savannah, is consigned to Mr. Brady. The Rev A. Epstein Reader of Congregation Mickve Israel is charged with its distribution,” read the story. “All who are able to pay for it will do so and to those unable it is a free will offering.”Although the Civil War still had a few more weeks to run, with one of its final battles taking place on April 9 at Appomattox, Virginia, a day before the first Seder, the Jews of Savannah were able to observe the mitzva of eating matza on Passover. It foreshadowed the unbreakable ties between the Jews of the North and the South, which thanks to the matza campaign of 1865, had already begun to be rebuilt.