When Passover and Earth Day meet

Pharaoh’s cold-hearted calculation of the economic benefit of maintaining slavery turned into a death wish for many of his people. 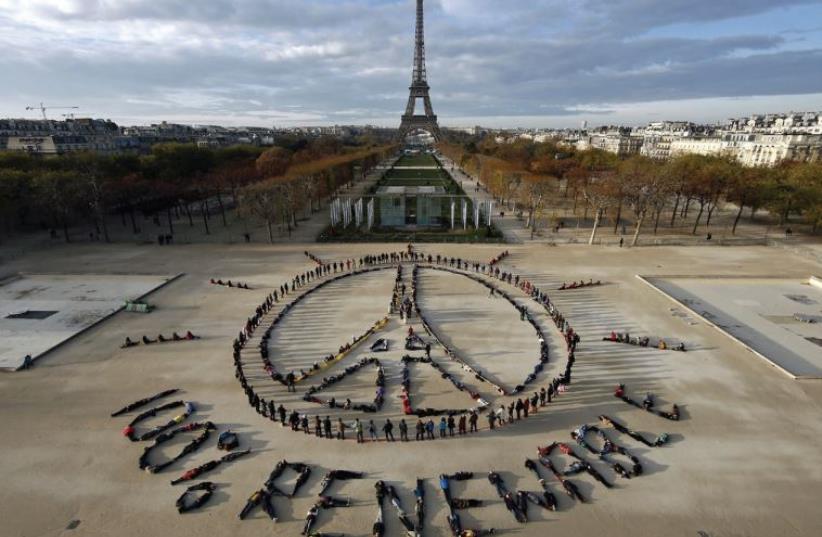 Hundreds of environmentalists arrange their bodies to form a message of hope and peace in front of the Eiffel Tower as the World Climate Change Conference 2015 convened at Le Bourget near the French capital
(photo credit: REUTERS)
Advertisement
This morning, Jews the world over will be burning the remnants of our bagels, hallot, and other hametz in a symbolic cleansing of our homes in time for Passover, which also happens to coincide this year with International Earth Day. The juxtaposition of the small billowing smoke piles, in the name of holiness, with the new-found attempt by the world community to limit greenhouse gas emissions, is simply delicious – if one is a fan of irony.Today’s Earth Day is also the Fast of the Firstborn, when people like me thank our lucky stars or some higher power that we were not the first born of ancient Egypt at a time when a certain people’s cries of slavery were finally answered against the CEO of corporate Egypt.Pharaoh’s cold-hearted calculation of the economic benefit of maintaining slavery turned into a death wish for many of his people.This is the first Earth Day and the First Festival of Freedom following the historic climate deal in Paris, intertwined so nicely that it begs the questions: Why is this Passover different from all other Passovers? Or why is this Earth Day different from all others? Because they are the last ones, perhaps, before our rivers (or at least our consciences) will be bloodied, creatures and diseases will unnaturally migrate and spread, our weather will yield even greater disasters, record numbers of livestock in expanding extreme drought zones will perish, darkness will descend on Beijing air and elsewhere, and, yes, more people will die than ever before from ancient yet new plagues, brought about by billowing smoke, large and small.Do not fret; I am not suggesting, not even for a nano-second, to cease the precious burning of our stale bread on this holy day. What would be the point? Eliminating this ritual will do nothing to mitigate climate change. The Jewish answer to climate change on this Earth Day is much more revolutionary, demands so much more consciousness, invites so much more discussion, and questions the very essence of our planet’s enslavement to fossil fuels.Burn your hametz! Burn it! But then make it your very last act of carbon violence without a liberation story.Our hearts have been hardened by materialism as the pyramids of wealth weigh us down; enslaved by fossil fuels in a world that has forgotten to say dayenu, enough is enough. As Jews, we are obligated to protect our Earth not only for ourselves but also for future generations.So burn your hametz, but please do not buy a conventional car.Burn your hametz, but calculate your annual carbon footprint and invest in off-sets via planting JNF trees or through commercial services like Terra-Pass.com.Burn your hametz, but stop your government from allowing the burning of fossil fuels when renewables are now just as cheap and clean.Burn your hametz, but from now on, be a green voter.Ancient Egypt was a cult of death; Judaism is supposed to be a celebration of life in direct theological contradistinction from the Egyptians.But check out those rabbinical pension funds and the endowment funds of our seminaries, universities and federations.Even the the socially conscientious Union of Reform Judaism and Hebrew Union College’s funds are embittered with morally questionable stocks. But God is Great. All the coal stocks they held drowned in value as the coal companies lost $30 billion in the United States since the previous shmita year. Morally, they should never have been in the portfolio in the first place. But our hearts were hardened by our greed, like youknow- who. And what is true for coal stocks – that there is no moral or investment rationale for holding them – is also true for oil companies. Unless, of course, we allow Pharaoh to continue to manage our Jewish portfolios, which seems to still be the case. Profits at any moral price, indeed. (Israeli universities are just as guilty.) The matza of Earth Day should doubly remind of us our vulnerability and that of the planet. A new green consciousness is needed by Jews, as early movers in an interlinked world that would follow a positive example of de-carbonization.Our addiction to carbon perpetuates the cult of death, for who can deny the wars fought for oil and gas? And Israel’s own obsession with burning gas, part of the cult of death, has nearly killed the solar industry here, an industry of hope and life.Because of Passover, Israel’s Earth Day celebration will be taking place on Monday, April 25, in Kishon Park in Haifa, a city taxed by carbon and air pollution in a country that does not yet tax carbon. Green Course and other groups will be celebrating with music, educational activities, hiking and more; bring your matza sandwiches.Breaking free of the shackles of fossil fuels, in our own lives and as a people, in the best way to celebrate our Festival of Spring on this gloriously timed Earth Day.The writer was a member of the Israeli negotiating team at the Paris Climate Conference and serves as CEO of Energiya Global Capital.