Where is the outcry from Western feminists?

You know, continents where women are still yammering about glass ceilings at corporations and harassment by drunken boys on campus trying to cop a feel. 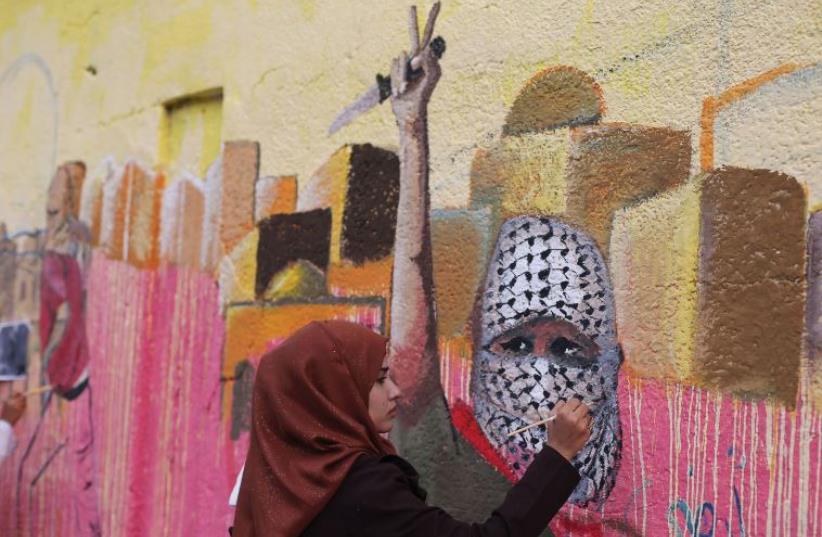 A PALESTINIAN woman paints a mural in support of Palestinians committing stabbing attacks against Israelis, in the southern Gaza Strip in November
(photo credit: IBRAHEEM ABU MUSTAFA / REUTERS)
Advertisement
The recently appointed head of Israel’s Shin Bet internal security agency gave his first presentation on Tuesday to the Knesset Foreign Affairs and Defense Committee. As part of his overview of the country’s current situation, Nadav Argaman addressed the role of Arab women in the terrorism wave against Israelis that began last September. More specifically, he talked about the way in which Palestinian girls and women are being forced by the norms of their society to become cannon fodder in the “lonewolf intifada” characterized by stabbings, car-rammings, firebombing, pipe-bombing and rock-throwing.According to Argaman, so far more than 40 females have been wounded, killed or arrested for committing – or attempting to commit – terrorist attacks against Israeli soldiers and civilians. These acts are both homicidal and suicidal in nature: geared toward murder on the one hand, but usually involving or resulting in self-sacrifice.Indeed, a teenage girl who runs up to a group of soldiers while flailing a knife and shouting “Allahu akbar” knows she is not long for this world. Even those who go after unarmed passersby are aware that they are likely to be shot.The Shin Bet chief explained that in the vast majority of such cases, the girls or women had a more pressing things on their minds than the politics of resistance that their leaders declare will bring about the elimination of the Jewish state, and that their imams say is a Muslim duty. In fact, Argaman pointed out, most of these women had “shamed” their families in some way, through what is considered to constitute sexual misconduct. This could include anything from flirting with the wrong boy – a Christian, perhaps – to engaging in actual or perceived adultery.These women know that what awaits them is a painful, humiliating, often slow death at the hands of one or more male relatives – fathers, brothers, uncles, cousins – with no intervention on the part of their mothers or the Palestinian police.Yes, honor killing is alive and well in the Palestinian Authority, whose leaders traipse around the United Nations in Armani suits to bemoan Israeli injustices.To “launder” their inevitable end, many Palestinian girls opt to go out with a literal bang and become “martyrs.” Some, Argaman said, are encouraged to do so – even driven to the site of the terrorist attacks they are told to commit – by their parents.If the girls are put to death for dishonoring their families, the stain remains. If, on the other hand, they are killed in the process of murdering Jews, their parents are guaranteed adulation and a hefty monthly stipend from the coffers of the PA, filled regularly by the United States and Europe.You know, continents where women are still yammering about glass ceilings at corporations and harassment by drunken boys on campus trying to cop a feel.On the very day Argaman gave his talk, and at the same location, female IDF soldiers were being saluted for their dedicated service through a series of events held in their honor. The main ceremony, called “Women of Valor,” included speeches by Prime Minister Benjamin Netanyahu, Knesset speaker Yuli Edelstein and Supreme Court President Miriam Naor.“The history of the Jewish people is full of female role models like yourselves,” Netanyahu said, lauding the women soldiers and police officers who have risked, and sometimes lost, their lives confronting Palestinian terrorists. “I am thrilled to see the professionalism, determination and ability of female soldiers in the air, land and sea and in every part of the IDF.”As talk of renewing the “peace process” between Israel and the PA is back in the headlines, it is imperative to remember that there is a war going on. And, as George Orwell wrote in 1943, “There is hardly such a thing as a war in which it makes no difference who wins. Nearly always one side stands more of less for progress, the other side more or less for reaction.”There is no greater tool by which to measure which side in this case stands for progress: the one that honors its women, not slaughters them for dishonoring their men. Yet where is the outcry from Western feminists? Directed at Israel, of course.The writer is the managing editor of The Algemeiner.