Where is world outrage over Hadar Goldin and Oron Shaul?

Holding the bodies of soldiers killed in action and refusing their return to their next of kin for burial is a serious violation of the Geneva Conventions and international humanitarian law. 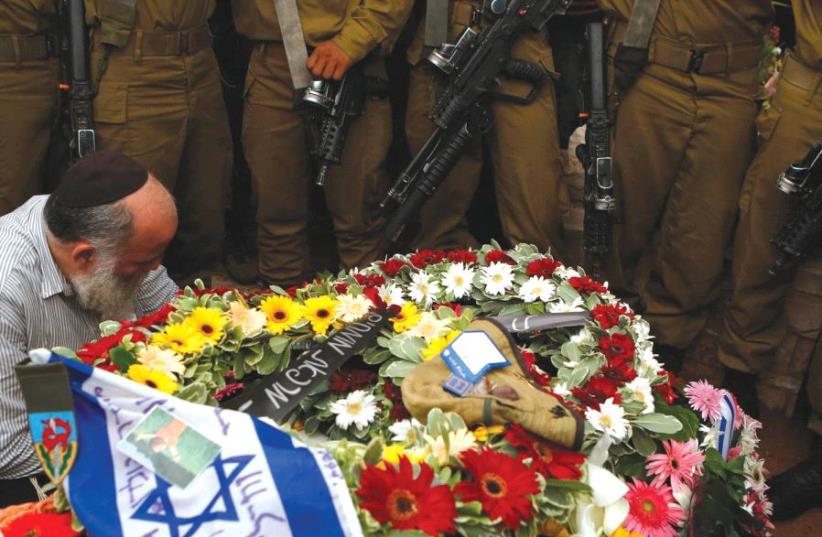 SOLDIERS STAND next to the grave of their comrade Lieutenant Hadar Goldin during his funeral in Kfar Saba in August 2014
(photo credit: REUTERS)
Advertisement
On May 1, Israelis will observe Remembrance Day, honoring soldiers who fell in defense of the Jewish state, and victims of terrorism.At an age when most teenagers are getting ready to go off to university or travel abroad, Israelis devote at least two to three years of their lives to defending and protecting their country, the only Jewish state, and by extension the West’s front line of defense in the global war against Islamic terrorism.Two such soldiers who made the ultimate sacrifice in defense of the State of Israel were Lt. Hadar Goldin and Sgt. Oron Shaul, who were killed in action by Hamas during Israel’s defensive 2014 war with the terrorist group, Operation Protective Edge.On August 1, 2014, hours after a United Nations- and US-brokered humanitarian cease-fire between Israel and Hamas went into effect, Hamas terrorists emerged from a tunnel in Gaza, ambushed an IDF unit and killed Hadar, who was only 23 years old. Hamas then took his body and have been holding it hostage in Gaza since, treating it contemptuously as both a bargaining chip and an instrument to torment his family.Shaul, who was only 20 years old at the time, was also killed by Hamas, when he left his armored personnel carrier to repair the vehicle and Hamas fired on his unit, killing him, and likewise taking his body and malignly holding it in Gaza.Holding the bodies of soldiers killed in action and refusing their return to their next of kin for burial is a serious violation of the Geneva Conventions and international humanitarian law. As is using the soldiers’ bodies as bargaining chips, which Hamas continues to do.Only last week, the terrorist group released a morbid video including a song in Hebrew, taunting the families of Goldin and Shaul, again in breach of international law.To this day, almost three years since their abduction, Hamas refuses even to grant the International Committee of the Red Cross (ICRC) access.That Hamas, a fanatical Iran-funded Islamist terrorist organization, does not abide by even a modicum of international law and basic human decency is beyond dispute. But where is the international outcry? Only last week, the international community was up in arms over a large group of Palestinian prisoners on a hunger strike in Israel. These were however violent murderers convicted of terrorism-related offenses.Moreover, Israel affords these prisoners full rights under international law, including access to ICRC, and returns bodies of terrorists killed attacking Israelis.Yet the same international community, overflowing with concern over the welfare of Palestinian terrorists, can’t even feign interest in the Israeli soldiers held hostage by Hamas.Where is the Red Cross? Virtual silence.Where is the UN, under whose auspices the cease-fire during which Hadar was killed and kidnapped was brokered? Silence. Awaking only occasionally to condemn Israel in New York or Geneva, but turning a blind eye to Palestinian terrorism.Where are self-professed human rights groups like Amnesty and Human Rights Watch? Silence again.Perhaps to them the human rights of Jews and Israelis are not worthy? What about Mahmoud Abbas? The Palestinian Authority president claims he wants peace, yet instead seeks to embrace Hamas and glorify those who kill Israelis.You can be certain that if Goldin and Shaul were British, Australian, American, French or Russian soldiers, there would be an international outcry. But only silence and sheer neglect when it comes to the lives of Israelis.We understand there are many pressing humanitarian concerns facing the world today, not least in the Middle East, but the world must not forget Hadar Goldin, who was killed and taken hostage during a UN cease-fire, as well as Oron Shaul.This is not only a matter for Israelis, but a basic humanitarian issue. These young soldiers, who made the ultimate sacrifice for freedom, could be any of our soldiers, defending the West from global jihad.The international community, which is seeking to rebuild Gaza and promote peace in the region, should make any further efforts conditional upon the immediate and unconditional release of the Israeli soldiers’ bodies.The Red Cross also has a fundamental duty to speak up.Meantime, the UN, aided and abetted by the Obama administration, exerted great pressure on Israel to accept this cease-fire, and therefore bears primary responsibility for ensuring the return of the bodies of Goldin and Shaul.The families of these young men deserve, and by law are entitled to, a proper decent burial at home in Israel.It is time the world showed that Israeli lives matter too.Col. Richard Kemp is a former commander of British forces in Afghanistan.Maj.-General Jim Molan is a retired Australian army officer who served as chief of operations for the Multinational Forces in Iraq and as Prime Minister’s Special Envoy for Border Control.Arsen Ostrovsky is an international human rights lawyer.