This Tuesday, we will mark the 9th of Av, when the Temple was destroyed. The Temple represents our unity. When we restore our union, we will not need bricks to prove our place is here in Israel. 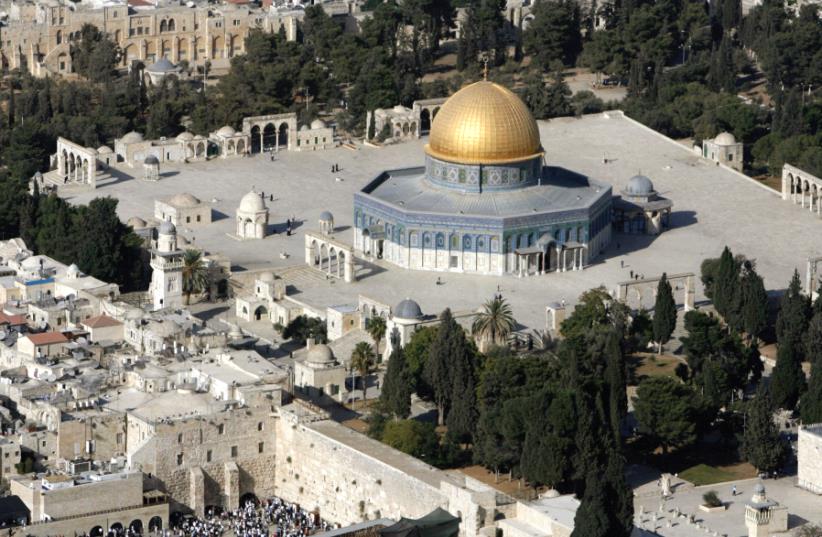 It is no secret that the Arab smear campaign in the media and the organized “popular” protests against the placement of metal detectors at the entrances to the Temple Mount have nothing to do with security measures. From the perspective of the Wakf (the Islamic organization controlling and managing the Temple Mount), and the rest of the Arab world, the resistance to the detectors represents the resistance to Israel’s sovereignty on Temple Mount in particular, in the city of Jerusalem, and in all of Israel. The longer this campaign lasts, the more the Arabs will gain the favor of the world, and Israel will increasingly be seen as the bully in the neighborhood.

By now, hardly anyone remembers that the detectors were placed at the entrances because three terrorists opened fire on Israeli police, killing two officers and wounding a third. All that everyone sees now is that Israel is not letting Muslims pray in their holy site, when in fact, the only people keeping worshippers outside the Temple Mount are the Wakf, who are telling worshippers not to enter in protest of the placement of detectors.

The Temple—the Unity of Israel

Not only the Wakf objects to Israel’s authority on Temple Mount. The resolutions of UNESCO denying the Jewish history on Temple Mount, Jerusalem, and the Cave of the Patriarchs in Hebron represent the view of the entire world that we do not belong here. If the UN were to vote today on the establishment of a Jewish state, who would vote “Yes”? Probably not even America.

To be a sovereign in the land of Israel, and particularly on Temple Mount, you must understand what the Temple represents and lead your life accordingly. The book Netzah Israel (Chapter 4) writes, “The House was ruined due to unfounded hatred, for their hearts divided and they parted and were unworthy of a Temple, which is the unity of Israel.”

If we honestly reflect on our society, on what we project to the world, it is clear that we are deeply divided and project disunity and discord everywhere. The Maharal of Prague writes in Hidushey Avot (Gittin 55b): “The Temple should be the wholeness of the entire world, not of Israel alone. …Since the Temple is the wholeness of the entire world, the nations included, it was not ruined by the nations, but only by unfounded hatred and division, when Israel divided.”

In other words, the Temple does not belong to any one nation or faith; it represents the unification of the world. Therefore, only those who advocate and execute unity merit being there. The Hebrew word Yehudi (Jew) comes from the word yihudi, meaning united (Yaarot Devash, Part 2, Drush no. 2). When we, Jews, united “as one man with one heart,” it was the first and only time in history when people of different, often rival clans from all over Babylon and the Near East united and forged a nation. Our unity, therefore, was a model for the entire world to follow. As a result, immediately following the establishment of our peoplehood, we were commanded to be “a light unto nations,” to take our method of unity to the rest of humanity.

Jewish-Roman historian Josephus Flavius lived at the time of the ruin and witnessed many of the events first hand. He wrote very clearly about the causes of the ruin of the Temple and the exile (The Wars of the Jews, Book IV, Chapter 6): “The sedition [among the Jews] conquered the city, and the Romans conquered the sedition.” In the days of the Temple, Flavius details, “The attribute the [Jews] lacked most was mercy. …They transferred their rage from the living to the slain, and from the slain to the living [of their own people]. The terror was so great that the survivors called the dead ‘happy,’ as they were already at rest. … These men trampled upon all the laws of men [love of others], and ridiculed the words of the prophets. Yet, these prophets foretell … that the city should be taken and the sanctuary burnt by war when a sedition invades the Jews, and their own hand should pollute the Temple. Now these zealots … made themselves the instruments of the fulfillment [of the prophecies].”

When you think of the current hatred between the two sides of the political map in Israel, or between the two sides of the political map among US Jews, the similarities to the enmity among our ancestors are too striking to ignore. “At the end of the period of the Second Temple,” writes the book A Letter from Elijah (Part 3), “strife and hatred intensified in Israel, and pride was the root of the desire for absolute dominance. This brought them into hatred of their fellow person until they could not stand the very existence of the other. From that root of pride also emerged the audacity to sin shamelessly, for they did not perceive the contradiction between their actions and their views, and their conscience did not cause them to conceal their actions. And if they do not care about the conflict between their views and their actions, then they are regarded as ‘all sin.’ These are the things that caused the ruin of the House.”

A Land without a Sovereign

Today, we have a state, and we seemingly have sovereignty. But the name, “The State of Israel,” is still devoid of content. Our intolerance toward each other, our disdain toward our own people is skyrocketing. If we do not realize that we are repeating the same crime of unfounded hatred we committed two millennia ago, we will be banished from this land again until we are ready to unite above our differences as did our forefathers in the desert.

This Monday evening, we will mark the ninth of Av, the date when the Temple was destroyed. But it was destroyed in our hearts long before the bricks were set ablaze. With these compelling words, The Hida describes this inner ruin (Devarim Achadim, Tractate no. 6): “What can we say when we regret all day the ruin of the House and the [absence of] redemption? …It was all ruined because of unfounded hatred, and if we are disunited now and there is unfounded hatred, how can the House be built, since the cause of our ruin has not ceased from us? How can we say that we await Your salvation all the day while there is still unfounded hatred in our midst? Woe, how can man do good deeds as long as his impurity of baseless hatred is still in him?”

To be the landlords in the land of Israel, we must become once more the people of Israel, yehudim [Jews] from the word, yihudi [united]. Unless we reconstruct our unity and reassume our commitment to be a beacon of unity unto nations, the world will not support our being here and we will be expelled once more.

Sovereignty in the land of Israel is unlike the sovereignty in any other land—acquired by military might. This land has no sovereign; its dwellers are people who are willing to connect, to unite above their hatred, just like our forefathers. If we can learn the lesson from the horrors of our ancestors and transcend our selfish egos, we will merit staying here, and the entire world will be behind us. But if we opt once more for enmity, then we will suffer the hostility of the entire world, but not before we scuffle with each other once again.

For more information on antisemitism and the role of the people of Israel, please visit Why Do People Hate Jews.

Michael Laitman has a PhD in Philosophy and Kabbalah and an MSc in Medical Bio-Cybernetics. He was the prime disciple of Kabbalist Rav Baruch Shalom Ashlag (the RABASH). Laitman has written over 40 books, which have been translated into dozens of languages.