Why are there anti-Israel Jews?

No other country must defend against its own people’s passion to destroy it. The world hates us because we hate each other. Let’s simply stop. 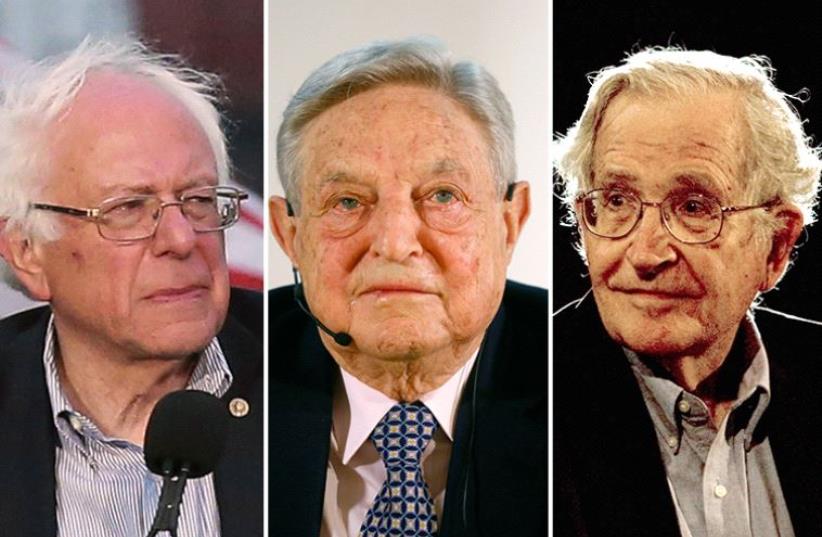 Sanders, Soros and Chomsky
(photo credit: REUTERS)
Advertisement
When the State of Israel was established, shortly after the end of World War II, the overwhelming majority of Jews were overjoyed. They were filled with hope for a safer future after the atrocities of the Holocaust. In the eyes of the world, the Jews were perceived as a tiny, persecuted nation that deserved to live in peace in its own country like any other nation.Much has changed since then. The world has become increasingly critical of Israel. In recent years this criticism has become outright hostility, to the point that politicians and state officials openly question the judgment that led to the creation of Israel in the first place.Along with the world, and perhaps even ahead of it, Jews in Israel and around the world became increasingly critical of Israel and its policies. Today, many of them openly question the legitimacy of Israel’s existence.

In the current zeitgeist, a great many Jewish people living in the Diaspora are either overtly or covertly anti-Israel. Sidney and Max Blumenthal, Noam Chomsky, and even Bernie Sanders, of whom I wrote in a previous column, are prominent examples of Jews engaged in anti-Israel activities. But perhaps the archetype of Israel-hating is billionaire, George Soros. Mr. Soros spends millions of his own money each year to support anti-Israel organizations and pressures the American government to support the supposed “victims” of Israel.Natan Sharansky, former chairman of the Jewish Agency, coined what is known as the Triple D Test, to distinguish criticism of Israel from anti-Semitism. The three Ds are Delegitimization of Israel, Demonization of Israel, and Double standards toward Israel. Were the actions of the prominent Jews just mentioned tested against the three Ds, they would pass “with flying colors” and would be labeled as bitter anti-Semites. The only reason they are not classified as such is that they are, well, Jews.No other nation has such virulent critics coming from within its own ranks, and no other country must defend against its own people’s passion to destroy it. To understand where such loathing comes from, we need to look into our roots.Why the Fierce Hatred?

The Midrash (Beresheet Rabah) tells us that Abraham the Patriarch left his homeland and headed for Canaan after a confrontation with King Nimrod. He fled for his life and began to spread the notion that triggered his clash with his king: The ego cannot win; it must be covered with mercy and love. The Midrash goes on to describe how Abraham’s group grew until it became a nation that pledged to be “as one man with one heart” and was charged to become “a light unto nations,” disseminating the unity they had attained.“Hate stirs strife, and love covers all crimes,” said King Solomon. This was the motto of the ancient Hebrews, our forefathers. This short verse summarizes the essence of our ancestor’s spiritual work. Their aspiration was to achieve the ultimate goal: “love your neighbor as yourself.” This, as Rabbi Akiva put it, was the all-inclusive law of the Torah. However, as Israel fell prey to baseless hatred, they lost the ability to cover their hate with love, the Temple was ruined, and the people were exiled.The World’s Lost Hope

With the loss of our ability to cover our hatred with love, we also lost the ability to be “a light unto nations.” In consequence, the nations lost the hope of learning how to unite above their egos. Since then, the ego has been king of the world, and the nations regard Jews as the world’s prime, if not sole, evildoers.Worse yet, because we have forgotten how to cover hatred with love and our obligation to pass on this knowledge, we cannot understand why the world hates us. We think we are like everyone else. But “Every Jew, no matter how insignificant, is engaged in some decisive and immediate pursuit of a goal,” declared Goethe. Indeed, the “memory” of our unique vocation lies deep within every person in the world, regardless of creed, even if unconsciously. This is what makes people so sensitive when it comes to the unofficial representative of the Jewish people—the State of Israel. This is also what makes people critical of Israel when they think its actions do not meet a moral code no other nation is required to uphold.The third D in Sharansky’s test, the Double standard, is something all people—Jews and non-Jews alike—share when it comes to “the chosen people,” and particularly to the State of Israel. Put differently, there is a global consensus that Israel is not just another country. But because we don’t know what our responsibility is, Israel bashers of all stripes end up delegitimizing its existence.Where Soros Is Right and Where He Is WrongI can understand where the criticism of Soros and other Israel-hating Jews comes from. Like me, they feel that Israel’s current conduct is detrimental to the world. But when it comes to the solution, we are on opposite ends from one another. Israel haters judge it by its policies and determine that since they disagree with them, Israel should not exist. By bashing it, they distance themselves from the evil and present themselves as working for the benefit of humanity.I, on the other hand, relying on the wisdom of our sages, value Israel only according to the level of our unity. According to what I learned, our only fault is our disunity. Israel is detrimental to the world only because we, Israelis and Jews, don’t know the true role of Israel.The vocation of the Jewish people has not changed since its inception. We are still the ones who must unite “as one man with one heart,” learn to love our neighbors as ourselves, and thereby become “a light unto nations.” But we cannot become that example unless we are given the physical conditions to recreate that unity. That physical condition is the State of Israel.We did not return to Israel for our own sake. We came here to do a task we owe the world. Only if we work on our cohesion and mutual responsibility, and build our society accordingly, the world will deem our presence here as legitimate and will stop demonizing us.Even if at first it will be hard to cover our centuries-old alienation from each other with love, our efforts to achieve this will be viewed with favor. Every Jew, from Israel lovers to Israel bashers, must take part in reinstating the spirit of the Jewish people, the spirit of mercy and love. The world hates us because we hate each other. Let’s simply stop.

Michael Laitman is a Professor of Ontology, a PhD in Philosophy and Kabbalah, an MSc in Medical Bio-Cybernetics, and was the prime disciple of Kabbalist, Rav Baruch Shalom Ashlag (the RABASH). He has written over 40 books, which have been translated into dozens of languages.
Advertisement
Subscribe for our daily newsletter