Why did Turkey enter Syria?

Obviously, the liberation of the city was not problematic for the Turkish military; according to the Turkish Defense Ministry only one FSA fighter has been killed during the “Euphrates Shield” op. 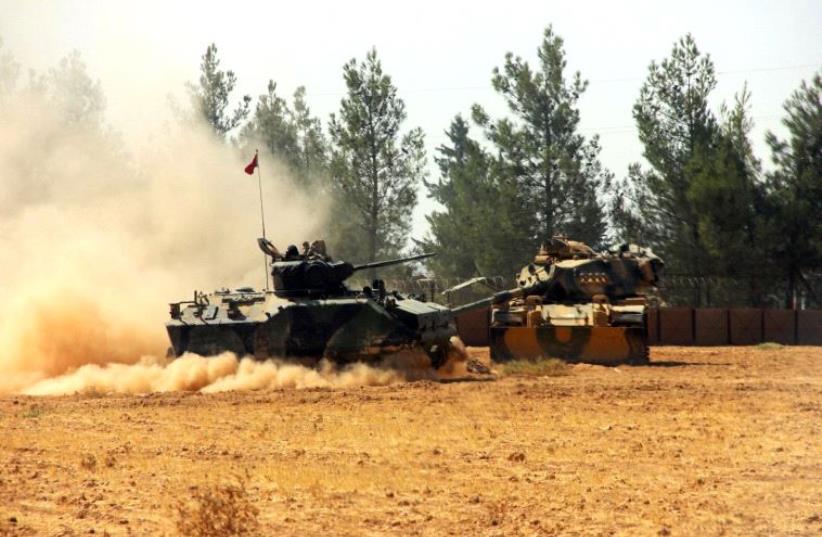 A Turkish army tank and an armoured vehicle are stationed near the Turkish-Syrian border in Karkamis in the southeastern Gaziantep province, Turkey, August 23, 2016
(photo credit: REUTERS)
Advertisement
The Syrian civil war has been raging for over five years, and there are still no winners in sight. On the contrary – new actors are becoming involving into the conflict day by day – this week the Turkish army also joined the fray, by intervening in the Syrian city of Jarablus to support Free Syrian Army militants and fight against Islamic State (ISIS).Jarablus is a vital supply line for ISIS and one of its last remaining strongholds on the border. Every actor in the Jarablus operation is fighting for its own reasons. Turkey certainly sought to weaken ISIS, which has shelled Turkish territory and carried out a series of terrorist attacks – including a suicide bombing in the southern city of Gaziantep just last weekend which killed 54 people at a wedding.Obviously, the liberation of the city was not problematic for the Turkish military; according to the Turkish Defense Ministry only one FSA fighter has been killed during the “Euphrates Shield” operation.Prior to the incursion into Syria, Turkey was part of the international anti-terrorism coalition and its presence in Syria was limited to fighter jets and air raids. With Turkey’s unexpected intervention, the international anti-terrorist coalition members may finally have a professional ally against the radical Islamist organizations.Undoubtedly, the seizure of Jarablus will shape the war against ISIS to the West’s advantage. The military campaign in itself can be perceive as opening a new era in US-Turkish cooperation. Even though Ankara has not clarified its motives in entering Syria, it is no secret that the main source of concern of Turkey is the rising influence of the US-backed Kurdish Democratic Union Party (PYD).A US-backed alliance between the Kurdish militant groups and some Syrian Arabs called the Syrian Democratic Forces (SDF) has been advancing and taking over strategic areas from various armed Islamist groups. It scored a success by driving ISIS militants out of the town of Manbij this month. Most probably the liberation of Manbij will not be the last objective of the Kurds, as simultaneously they are trying to recapture the town of Azaz (near the Turkish border), which is supposed to be a part of the “buffer zone” in Northern Syria.So what does Ankara want to achieve? Firstly, Turkey aims to degrade the ISIS in this part of Syria and make sure that it is no longer able to pose a real threat to its national security. Beyond that, Turkey seeks to strengthen its own influence in this part of Syria.The other aim is the already-mentioned PYD. Therefore, the primary issue that was raised by Prime Minister Binali Yildirim during US Vice President Joe Biden’s visit to Ankara was the PYD’s and its armed wing the YPG’s activities.Yildirim made clear that Turkey and the US had come to an agreement that the PYD and its armed wing, the People’s Protection Units (YPG), should return east of the Euphrates following the successful operation to push ISIS off Manbij. Yildirim also called on the US to reassess its support for the YPG, recalling once again that the PYD and the outlawed Kurdistan Workers’ Party (PKK) were one and the same.Apparently, the Kurdish-affiliated SDF militia intends to advance toward Jarablus following the Manbij campaign, which may lead to confrontation with Turkish army. The Syrian Kurds have made no secret of their desire to expel ISIS and government forces from Manbij, Jarablus and Hasakah to link these territories to the northern part of Syria.Seemingly, the Turkish intervention did not cause much anxiety in either Moscow or Washington, which means that Turkish President Recep Tayyip Erdogan notified his Russian counterpart Vladimir Putin about the upcoming military operation during his official visit to Russia in the beginning of August. In fact, the US needs a professional ally that can push off ISIS and collaborate with those Arabs who do not completely trust the Kurdish militia.The Jarablus operation is the first phase of Turkey’s active involvement into Syrian civil war. Turkey will leave Jarablus in the FSA’s hands, though it may also keep military contingent there for further “unexpected” military operations against ISIS and the PYD.If Ankara can strengthen its positions in Jarablus, the town could serve as a foothold for further military expansion into Syria. Nevertheless, Turkey’s active measures in Syria will raise new tensions with the US-backed PYD.To sum up, local public opinion in Turkey is most likely to support the current intervention in the shadow of the ISIS’s recent deadly bomb attacks. The Jarablus operation will shift the long-awaited US-Turkey cooperation in northern part of Syria and most probably will strengthen the war against radical Islamist organizations.Simultaneously, PYD’s respective backers – the US and Russia – will have to work very hard to avoid a new escalation in Syria within the involvement of Turkey.The author is policy analyst at Wikistrat Inc, and regular political commentator for the BBC and Middle East Monitor. He is author of Syria 1946-2012 and Tunisian model of Democracy in Arab world.