Why Indonesia is a good partner for Israel

“We can’t be a mediator if we don’t know Israel. We must be close with both Israel and Palestine.” 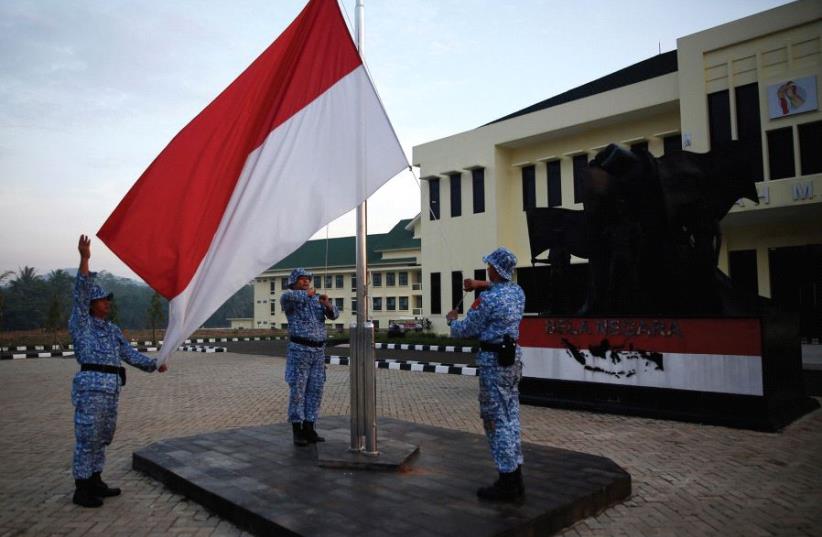 PARTICIPANTS RAISE an Indonesian flag at a training center in Rumpin, Indonesia, last June.
(photo credit: REUTERS)
Advertisement
Last month, Prime Minister Benjamin Netanyahu’s flight from Singapore to Australia was prolonged from the normal eight-and-a-half hours to 11 hours, because the government of Indonesia did not allow his plane to enter its national airspace, which stretches across three time zones – the distance from London to Afghanistan. Despite Israel’s formal recognition and repeated outreach to Indonesia since 1950, the two states still do not have diplomatic relations, and Netanyahu had to fly two-and-a-half hours longer.Indonesia is the world’s 10th largest economy, fourth-largest country, has the largest population of Muslims, is the only country in Southeast Asia ranked “Politically Free” by Freedom House and the fastest urbanizing country in Asia.Like Israel, Indonesia is the most multi-culturally diverse, politically- free democracy in its region.The archipelago nation has 360+ ethnic groups, 707 different languages, dozens of religions and 260 million people. For example, the largest number of Hindus residing outside of South Asia live in Indonesia.As a successful G20 economy, Indonesia is too large and significant of an emerging global power to be ignored.The world’s largest menorah, at nearly 19 meters tall, is located in Manado, Indonesia, with an accompanying synagogue. Today, approximately 200 Indonesian Jews, mostly descendants of Iraqi and Dutch Jews, are scattered across Jakarta, Surabaya, Manado and other locations.Despite the lack of formal bilateral relations, interactions between Israelis and Indonesians have been limited, but astonishingly positive. For example, annually, between 11,000 and 15,000 Indonesians visit Israel. And according to official estimates, Indonesia and Israel’s bilateral trade quietly reached the range of $400 million to $500m. in 2015.In the aftermath of the 2004 Indian Ocean tsunami, Israel sent volunteers to deliver humanitarian aid and medicine to Indonesia’s province of Aceh. In 2008, an official delegation of 23 Indonesian doctors was sent to Tel Aviv to be trained in the “management of multi-casualty incidents,” largely in preparation for potential terrorist attacks, disasters and other crises. There are numerous other examples of Indonesian and Israeli religious leaders, policymakers, athletes, journalists, students and other citizens visiting each other’s countries over the decades, as well.Clearly, the potential for productive partnerships between the world’s largest Muslim-majority nation and the world’s only Jewish- majority nation is tremendous.In March 2016, upon welcoming a delegation of Indonesian journalists to Israel, Prime Minister Netanyahu stated that he would like for his country to establish diplomatic relations with Indonesia, and to work with its citizens in areas such as water and high tech. “The relations between Israel and Indonesia need to change,” he said.“I have not a few Indonesian friends on Facebook. The time has come to change the relations, and the reasons that prevented that in the past are no longer relevant.”Change is possible. At present, there are several Indonesian Facebook groups and approximately half a million Facebook Likes by Indonesian citizens in favor of the advancement of Indonesian-Israeli relations. There is clearly an opportunity for an improvement in ties.So, what can Israel do to make more effective contact with Indonesia? First, the people of Israel should proactively reach out to the people of Indonesia, perhaps via the Internet and social media, to welcome them in a warm, inviting and respectful way. Start-up entrepreneurship, music, biotechnology, water, agribusiness, universal healthcare, fashion and cultural-heritage preservation are all potential areas of binational cooperation around which both countries’ peoples will most likely find common purpose and success.Israel’s Foreign Ministry and the National Union of Israeli Students should also invest heavily in smart public diplomacy and bilingual social-media assets to improve people-to-people contact with everyday Indonesians.Secondly, as a part of public diplomacy efforts Israel’s Strategic Affairs Ministry could help build a narrative for Indonesian President Joko Widodo and Foreign Minister Retno Marsudi to smooth any potential political fallout from diplomatic relations. They could both explain to the Indonesian people that 158 out of 193 UN member states already have diplomatic relations with Israel, including a substantial number of fellow Organization for Islamic Cooperation and Non-Aligned Movement member states. They could further emphasize that Muslim-majority states like Turkey’s, Egypt’s and Jordan’s diplomatic ties with Israel amplify their voices and influence in the Middle East peace process.In light of the Trump administration’s foreign policy, Israel and the Palestinian Authority should also clarify to Indonesia that a two-state solution cannot be successfully negotiated with only one of the parties. It should therefore be communicated to Indonesia that its treaty-enforcement, statecraft, advocacy, capacity-building and third-party mediation powers are more likely to be efficacious if Indonesia has diplomatic ties with both the Israelis and Palestinians.Lastly, the government of Israel should organize a diplomatic task force to strategically map where the convening power lies.In particular, it should identify key people and institutions who have had the authority and a successful track record of bringing Indonesians and Israelis together in the past. Exemplary conveners include Project Interchange, the Shimon Peres Center for Peace and Innovation, the Israel-Asia Center and the Australia/Israel and Jewish Affairs Council (AIJAC). Israel should speak out in support of these civil- society peacebuilding efforts, as well as the establishment of an informal rapprochement coalition that combines the convening powers of each of them.There is real opportunity for change. Indonesian Vice President Jusuf Kalla has stated that there is no reason Indonesia should not have closer ties to Israel. “We can’t be a mediator if we don’t know Israel. We must be close with both Israel and Palestine,” he explained in 2014. Israel should seize this opportunity by increasing public diplomacy and business relations, driving the creation of bottom-up change.Hopefully on Netanyahu’s next trip to the region, the Israeli delegation will be able to land in Indonesia to begin a long-overdue dialogue, and not be forced to detour around it.The author is a mid-career master of public administration candidate at the Harvard University John F. Kennedy School of Government.