This commitment is not easy and it is not cheap. 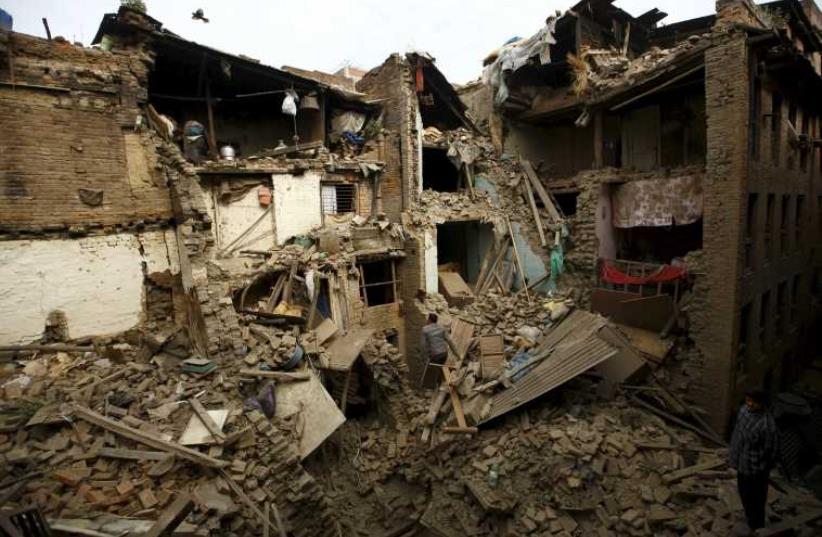 Video shows Nepal quake damage
(photo credit: screenshot)
Advertisement
This past Shabbat morning, when the caller ID on my phone indicated that Dov Maisel, United Hatzalah’s international operations director, was on the line, I knew it was serious. Both of us are proudly Shabbat observant, yet both of us regularly respond to life-threatening emergencies and public safety incidents in keeping with the Jewish commitment to the sanctity of human life. Initial reports were sketchy but it was clear that a major earthquake had struck one of the poorest countries with the most rugged terrain on the planet. The quake struck at the height of the popular spring hiking and climbing season. Hundreds of Israelis were known to be in the area.Dov briefed me on what was known and what was still in the realm of the unknown. A flurry of phone calls to governmental and non-governmental situation rooms got the ball rolling and the seed of the mission to Nepal began to grow. I had recently expanded the activities of the Israelife Foundation, the umbrella organization of United Hatzalah, to become a platform to coordinate the activities of all volunteer emergency response organizations in Israel. This platform could be mobilized immediately to support the people of Nepal and will undoubtedly be a vital resource in any future catastrophe. Word went out for the best emergency medical professionals from United Hatzalah, the elite search and rescue specialists from F.I.R.S.T. and the most experienced body recovery experts from the Zaka rescue and recovery organization.By 11:30 on Saturday night, representatives from all the organizations met for a marathon planning session to sort out the myriad of details. Dov explained to the team leaders elements of the mission that he was all too familiar with from his disaster relief missions to Haiti, the Philippines, Japan and other countries in need. I was already on a US fund-raising mission for United Hatzalah and Israelife, but when Dov briefed me about the planning, what amazed me was not the incredible scope of the logistical preparations, but that more than 150 people were vying for the opportunity be among the 25 selected to spend two to three weeks in a disaster area where it was not even clear where they would sleep. These are people with jobs, families and personal commitments. In the end only the most qualified, experienced and multifaceted volunteers were selected for the mission. The trait common to all of them was that they are truly the “meshugenahs” upon whose shoulders we lean when the going gets tough. When everyone else is running away from the chaos, they race in to bring order, comfort, and healing.
See the latest opinion pieces on our page
This commitment is not easy and it is not cheap. Many people have questioned me, “Why are we as Jews and Israelis investing our time, energy and resources in helping people in distant lands?” Some people said what others were thinking, “Was the world there for us?! Will the world be there for us?!” My memory tells me that history is, in fact, replete with stories of people who have stood up for us in our time of need because we were there for them as individuals, families or nations. My contacts told me that there may be tens of thousands of people who have been hurt, lost or worse.My experience tells me that this, helping people in disaster zones, provides invaluable training and skill enhancement for future emergencies.Our responders will share this experience and knowledge with their peers so that, G-d forbid, if such a disaster were to strike Israel, regardless of whether or not the world remembers our kindness to them, we will be prepared to help ourselves. But in the end, as an Israeli, as a Jew, and as a human being, I listened to my heart, it’s that simple. “We are doing it because if we can make a difference, we’ll do it.It is the right thing to do!” Eli Beer, founder of United Hatzalah of Israel, established Israelife to coordinate operations with additional volunteer rescue organizations such as Zaka and FIRST (the umbrella group for all SAR units in Israel) to form the Israeli Joint Disaster Response Team.