Why universities need a definition of anti-Semitism

The correct response to bigotry is never to let it pass in silence. 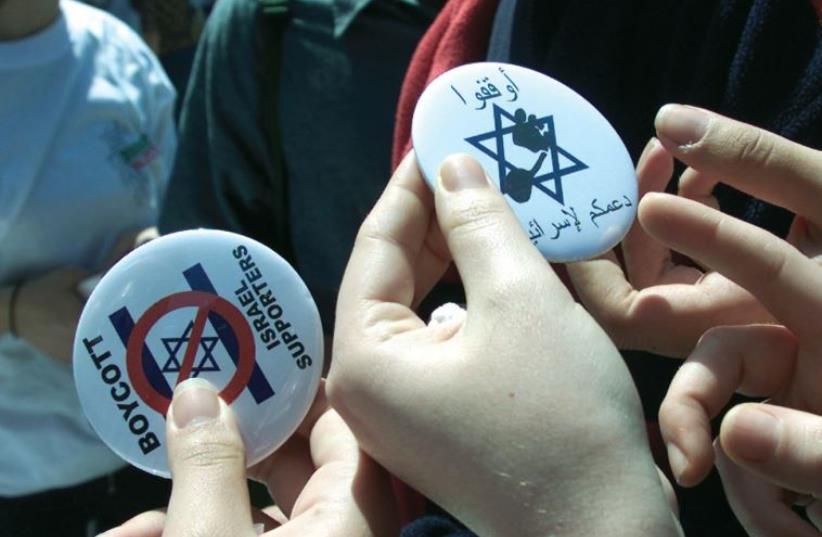 WOMEN HOLD pins that advocate a boycott against Israel
(photo credit: REUTERS)
Advertisement
Does it matter how we define our words? Sometimes it does. The US Department of Education understands this point, as do the Centers for Disease Control and Prevention (CDC).Universities need to learn it, too.Last year, the Education Department paid CDC to develop a uniform definition of the word “bullying.” Both agencies recognized that a uniform definition was needed to assist schools to understand what bullying is, when it occurs, and whether efforts to prevent it are successful.This is a basic point, and yet it is lost on many people, especially when the students involved are Jewish.Later this month, the regents of the 10-campus University of California (UC) system will decide whether to adopt a uniform definition of anti-Semitism.
See the latest opinion pieces on our page
They are responding to requests from several organizations, including mine, to adopt the US State Department’s well-regarded definition.This is a big issue for the UC schools, which have recently seen many high-profile anti-Semitic incidents.At UCLA, student government officials questioned a Jewish student’s ability to be impartial on the university’s judicial board due to her “strong Jewish identity.”At UC Davis, Jewish students were harassed during the occupation of a university administrative building by anti-Israel protesters.At UC Santa Barbara, a student wearing a Star of David necklace was spit on.The problem is not limited to California.Earlier this year, the Louis D.Brandeis Center and Trinity College issued a report demonstrating that 54 percent of Jewish college students reported experiencing or witnessing anti-Semitism during the 2013-14 academic year.To address this problem, universities must start with good definitions. As the CDC has explained, good definitions improve prevention by increasing consistency, facilitating comparison across data collection systems and enabling the comparison of research on intervention and prevention programs.Definitions are especially important for contemporary anti-Semitism, because confusion surrounds the relationship between Jew-hatred and animosity toward Israel. Virtually all authorities agree that some, but not all, of the hate directed against Israel crosses the line into anti-Semitism.Good definitions not only educate us about how quickly discourse can slip, even unwittingly, into dark corners, but they also foster legitimate intellectual exchanges by increasing awareness about where lines are drawn. This serves the academic interest in robust debate that is central to a university’s mission.THE STATE Department provides useful examples to understand when conduct is anti-Semitic. The Department uses the so-called “3D test.” Actions may generally be identified as anti-Semitic when they demonize Israel, delegitimize Israel, or subject Israel to double standards.When I was staff director at the US Commission on Civil Rights, the Commission held a watershed briefing on campus anti-Semitism. After the briefing, the Commission announced that anti-Semitism had become a “serious problem” on many college campuses.The Commission adopted the so-called EUMC Working Definition of Anti-Semitism to help universities identify the lines between hateful and non-hateful incidents. Later, the State Department adopted its own definition based closely on this model.As with any standard, the State Department definition should be used judiciously.One must consider context.Moreover, one must recognize that some incidents that meet the definition of anti-Semitism (or of racism or sexism) may also be constitutionally protected free speech.To say that an incident is hateful is not necessarily to conclude that it must be banned. In some cases, the First Amendment requires public universities to permit bigoted speech. Even then, however, it is important to recognize this speech for what it is.Anti-Israel activists are wrong when they charge that such definitions threaten free speech. Freedom flourishes best when rules are clearly articulated and terms are well-understood. Universities have many tools to ensure that their campuses remain safe and inclusive, while respecting everyone’s civil liberties.The correct response to bigotry is never to let it pass in silence. As the Civil Rights Commission correctly admonished, “Silence is an ally of hate.”The writer is president of the Louis D. Brandeis Center for Human Rights Under Law (www.brandeiscenter.com) and former staff director of the US Commission on Civil Rights. This year, Oxford University Press will publish his next book, The Definition of Anti-Semitism. Originally published at JNS.org