Will this make the world wake up?

The barbarism displayed by fanatics in Paris must serve as a catalyst for unity for all those who value human freedom. 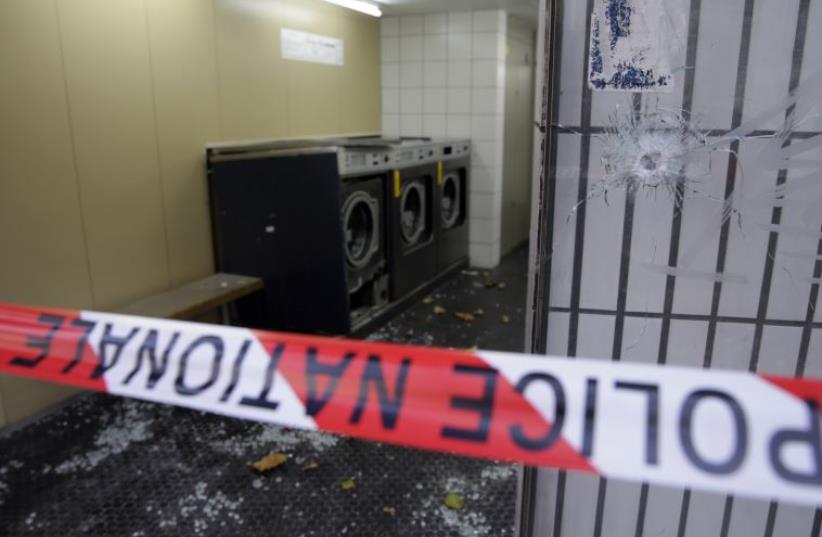 A launderette remains closed two days after an attack close by, in central east Paris, on November 15, 2015
(photo credit: KENZO TRIBOUILLARD / AFP)
Advertisement
Two weeks ago I wrote an article in my college’s weekly newspaper, The Wheaton Wire, about the wave of terrorism facing Israel. I had hoped that by writing I could bring a new tone to a campus which until today had no active pro-Israel voice. Just a week before the paper had run an article calling for my school to embrace the Boycott, Divestment and Sanctions (BDS) movement against Israel.The paper’s editors responded to my article by publishing an opinion piece on the front page titled, “Justified Violence.”And yes, you get its gist just from the headline.This was the first time the paper ran an article on its front page that didn’t relate to campus events – much less an opinion piece attacking a foreign country.On Friday afternoon I tuned in to the news and heard about the then on-going jihadist massacre in Paris. An hour or so into the updates, French President Francois Hollande had declared a national state of emergency and closed France’s borders.The culprit was clear from the outset and it took mere hours for the French authorities to admit that they had been struck by the forces of militant Islam. World leaders from US President Barack Obama to British Prime Minister David Cameron condemned the attacks and castigated them as assaults on humanity.What we witnessed this past week in Paris was not just an attack on the people of France, but also an attack on society as a whole. Liberté, égalité, fraternité are not just values embedded in the motto of the French Republic, but values shared by freedom-loving people across the globe.The response that we have seen from ordinary people around the world to the tragic events has been immense. Within 24 hours Facebook pages and Instagram feeds became adorned with the blue, white and red of France’s flag in a sign of solidarity.There’s no doubt about the fact that the world is right to stand united with France in its hour of need. But still, given my own recent experience, I cannot help noting that Israel received no similar outpouring of sympathy in its hour of need. In this latest round of Islamist terrorism against its citizens, as in all the previous ones, rather than responding with the fraternal feelings that the French are now embraced with, the nations of the world responded to Islamic terror against Israelis by condemning Israel and siding with the terrorists. This occurred despite the fact that there is no significant ideological distinction between Hamas and Islamic State (IS): both seek the establishment of a global caliphate and the destruction of Israel.Far from the Middle East, the people of Europe have lived in relative comfort and perceived safety. Scenes of terrorist attacks in Tel Aviv and Jerusalem have been viewed as unrelated to the lives of Europeans and were overlooked and disregarded. Now that Europeans have unfortunately experienced an event of a kind Israelis are far too familiar with, will Europeans recognize that there is no distinction between one group of Islamic terrorists and another? Will they respond as Prime Minister Benjamin Netanyahu has and say that an attack against one people is an attack against all people? How about my fellow students? Do they still believe that Islamic terrorism against Israelis is justified? In a speech broadcast in October 1938, Winston Churchill asked, “Has any benefit or progress ever been achieved by the human race by submission to organised and calculated violence? As we look back over the long story of the nations we must see that, on the contrary, their glory has been founded upon the spirit of resistance to tyranny and injustice.”Today, France and the rest of Europe must rekindle its old glory. The same glory which shone when Western Europe, led by Great Britain and the United States, stood up to Nazi tyranny in the middle of the 20th century As we saw once again in Paris on Friday night, the new tyranny that threatens Western society today seeks to bring barbaric themes out of the Dark Ages to the capitals of Western Europe and beyond.The barbarism displayed by fanatics in Paris must serve as a catalyst for unity for all those who value human freedom, whether they are in politics or academia. And that unity will only be meaningful if it includes the front-line state in the war against this barbarism: Israel.The moment that close-minded people, on and off campuses, recognize that the enemy that showed its head in Paris is the same enemy which fires rockets indiscriminately at Nahal Oz or Sderot and shoots motorists on the outskirts of Jerusalem is the moment that we move from a position of weakness to one of strength and our long string of losses and defeats becomes a winning streak.The author is a former soldier in Israel’s Givati infantry brigade and currently a student at Wheaton College in Massachusetts, USA.