Can Israel combat Iran at the UN?

Despite US sanctions which started in August 2018 and kicked into full gear this past May, support from Russia, China and a range of other countries has kept the Islamic republic afloat. 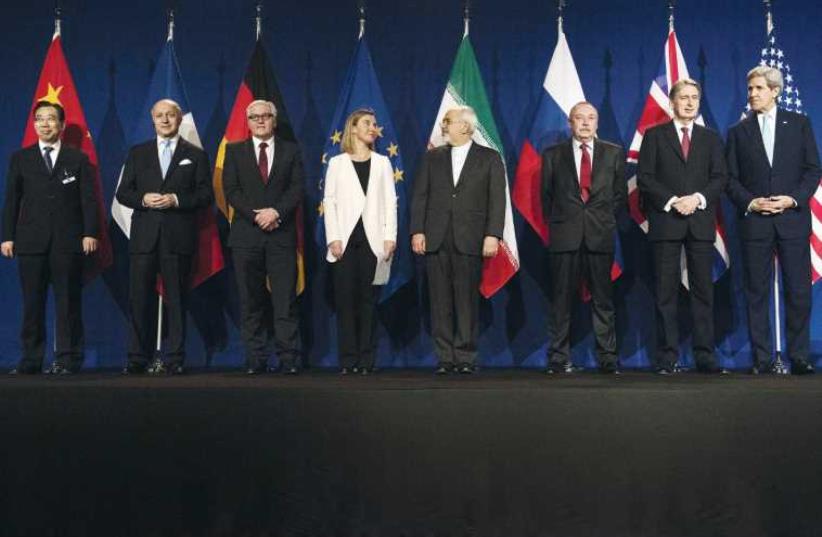 The P5+1 – China, France, Germany, the US, the UK and Russia – prepare to meet with Iranian Foreign Minister Javad Zarif at nuclear talks in Lausanne.
(photo credit: REUTERS)
Advertisement
More than four years after the Iran nuclear deal was signed and about 18 months after President Donald Trump pulled the US out of the deal, Iran is finally on the defensive again at the UN.
Since Trump pulled the US out in May 2018, the EU-3 have criticized the US and mostly given moral support to Iran, ignoring most of its problematic activities with ballistic missiles and in the Middle East.
This all changed two weeks ago when the EU-3 referred Iran to the UN Security Council for at least four separate violations of resolutions restricting it from ballistic missile testing.
Is this a turning point similar to 2010 where the world starts to unite again against Iran to snap back global sanctions against it?
In short, the EU taking Iran to task for its ballistic missile program on the UN stage is a highly significant moment, but likely far from a turning point. It’s pertinent, though, because it may start to shift the diplomatic moral high ground back in Israel and the US’s direction. It is likely not a turning point because Russia and China will likely blunt the impact.
Despite US sanctions which started in August 2018 and kicked into full gear this past May, support from Russia, China and a range of other countries has kept the Islamic republic afloat.
The US “maximum” pressure campaign is significant, but still does not impose anywhere near the same pressure that brought Tehran to cut the 2015 nuclear deal – pressure which flowed from unanimous UN global sanctions.
What made full UN sanctions possible in 2010 was Russian and Chinese cooperation and all signs are that those countries are currently standing strongly at Iran’s side.
Just as the EU-3 have been moving away from Iran and closer to the US position, Russia and China have done the opposite, closing ranks with Iran.
In September, right after the Islamic republic carried out a major attack on Saudi oil fields, Moscow announced that it would participate in a joint military naval exercise including Iran on December 27.
After Tehran announced its fourth violation of the 2015 nuclear deal in November, the Kremlin put out messages that Trump’s leaving the deal was at fault and left the Iranians blameless.
Russia also had no role in the EU-3 letter seeking to condemn Iran before the UN for ballistic missile tests, and going all the way back to the 1990s, it has been a huge facilitator for Tehran to leap forward with advancing the ballistic missile program.
Although Russia withdrew from a joint program with Iran at its Fordow nuclear facility in early December, this was not an important project to Moscow and was more of an obstacle that the West had imposed.
Also, around the same time that Russia made that withdrawal, Iran announced that Moscow was extending it a $5 billion loan. These are not the actions of an ally who is switching sides just because of some EU scorn.
China has also blamed the US for the nuclear standoff, rather than criticizing Iran’s violations of the 2015 deal or its ballistic missile tests.
Though Beijing has rescinded some very important public deals with Iran, it has worked a variety of off the books or untraceable economic deals to keep Tehran’s economy afloat, despite US pressure.
At one point, China reduced its purchasing of Iranian oil to close to zero, but by April it had returned to 800,000 barrels per day.
Even after the US ended sanctions waivers in May, China has maintained oil purchases and is recently steadily increasing.
In retrospect, Russia and China’s support for UN sanctions in 2010 and 2012 was a fluke which related to Iran’s then-president Mahmoud Ahmadinejad crossing each of them personally.
First, in the various negotiations themselves, Russia and China offered compromise ideas which favored Iran over the West, and Iran rejected and upstaged their proposals.
Second, empowered by domestic populism and internal resentment of Russia and China for some unequal economic dynamics, Ahmadinejad’s Iran took direct political and economic shots at them.
So they wanted to teach him a lesson.
But Ahmadinejad is long gone and the bigger game for Russia and China today is forming a counterweight to US global influence.
This means that unless the Islamic republic makes a similar new mistake crossing its sponsors, Russia and China are likely to veto any attempt to unite against Iran at the UN.
So Thursday’s meeting is not likely to remove the possibility that Israel may need to do a preemptive strike on Iranian nuclear facilities down the line.
It remains to be seen whether it will at least provide greater diplomatic cover for Israel to do so if the EU has finally turned the corner on Iran.