Working for the inclusion of Ethiopian Israelis 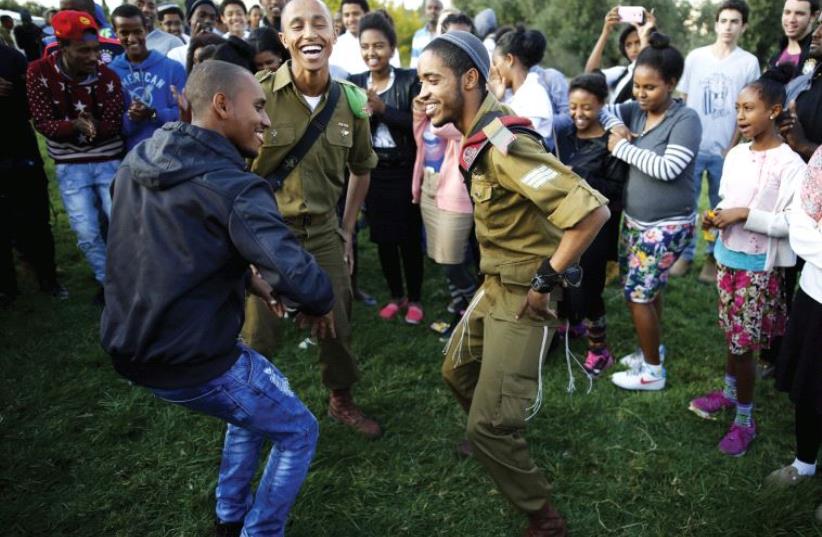 Members of the Ethiopian Jewish community in Israel dance during a ceremony marking the holiday of Sigd
(photo credit: REUTERS)
Advertisement
In contemporary democratic society, we tend to react harshly against people who make negative public statements about minority groups or their individual members. This is a good thing, as it gives these groups and individuals a chance to respond, to express their pain in a wider forum, and to be seen, in their ongoing state of oppression, by members of majority groups and the general populace. At a recent meeting of the Israeli Bar Association in Tel Aviv, police commissioner Roni Alsheich, fielding inquiries about over-policing within Ethiopian-Israeli communities, remarked on a “natural” inclination to react differently to “a suspicious person” than to “someone else.” He was clearly in the wrong to make such a sweeping, specious generalization about Israel’s most prominent minority group, and his words galvanized Ethiopian activists, who demanded, and received, an apology.This kind of emotional response to racist public statements shows the community’s pride in itself and unwillingness to be treated as the second-class citizens some would have them be. But the truth is, it is not nearly enough. Social justice advocates need, rather, to step up their daily efforts on behalf of those they’re fighting for, and not merely to wait for a public figure’s offense to raise an outcry. The reforms our society needs to make with respect to the treatment of its minority groups extend much beyond insensitivities in public discourse, grievous as these may be.There is, already, general agreement that Ethiopian-Israelis suffer from various overt and implicit forms of racial bias on a regular basis.Prime Minister Benjamin Netanyahu has acknowledged this openly and begun moving toward standing with his Ethiopian constituents by forming and assuming the leadership of a special committee to fight discrimination. Social activists within the Ethiopian community should work closely with this committee to implement the 53 recommendations made by Justice Minister Ayelet Shaked in an extensive report commissioned by Netanyahu’s committee.Our ultimate objective is the equal sharing of power and resources throughout Israeli society, with the inclusion of its Ethiopian minority.One of the most pressing present inequities involves the Israeli job market, particularly within the public sector, and the under-employment of highly skilled Ethiopian-Israeli workers. Education and employment hold great promise for closing the still unacceptably large socioeconomic gap between Ethiopian Israelis and the majority population. Yet there are many fully qualified, professionally trained individuals within the Ethiopian community who remain confined to employment situations well beneath their rightful level. This problem also stretches further back along the developmental timeline, where unequal access to educational resources begins to limit the future of Ethiopian youth at a much earlier point. These disparities must be identified, and eradicated, at every juncture.As a member of the minority Ethiopian community, I know more than a few well-educated, intelligent individuals whose jobs are ill-suited to their capabilities and professional attainments, or, worse yet, who have not been able to find work at all. For example, Rabbi Reuven Wabashat is an expert rabbinical judge and widely accepted Jewish legal decisor in matters of ritual slaughter and matrimony, who hails from the Gonder region of Ethiopia and currently serves the city of Netivot.He was educated in Israel, after making aliya with his family at the age of six in 1972, and went on to become a distinguished officer in the IDF, maintaining membership in its reserve corps to this day. He has published numerous volumes of Jewish legal responsa and biblical exegesis, which have been used as pedagogical guides at rabbinic schools throughout Israel and abroad.However, even with these extensive professional accomplishments, he has not been appointed to higher rabbinic office by the Chief Rabbinate or Religious Affairs Ministry and remains employed in a position grossly mismatched with his qualifications. There are, indeed, no Ethiopian-Israeli judges serving on any of the country’s religious courts, despite a great need for improved cross-cultural understanding and interpretation within the religious judicial system.I know of another individual, who made aliya from Addis Ababa and went on to earn a master’s degree in community leadership and philanthropy from the Hebrew University.His past professional experience includes nine years of counseling and advocacy within the US family court system and more recent volunteer work within the Knesset.He was a proud Zionist who’d always dreamed of representing Israel abroad and promoting its sometimes beleaguered cause on the international scene. He tried applying for positions within the Foreign Ministry but could not even begin to access basic information on hiring and recruitment. Eventually, he devised the strategy of seeking employment as a cleaner of the Foreign Ministry’s offices, hoping that a foot in the door would allow him to be noticed and promoted. Sadly, this never happened, and he left Israel to pursue doctoral studies abroad, hoping that attaining this added credential might, perhaps, give him what it takes to be accepted for official employment by the Israeli government, despite his minority status and limited contacts or connections within the political establishment.Happily, though, this man has held onto his hopes of serving the land that he loves, past challenges and barriers to entry notwithstanding.I can say this with utter certainty and undimmed conviction, for I am that man.Yes, Ethiopian social activists in Israel need to work hard to secure the full share of power and resources that are our community’s due.They must not only respond to highly publicized racist remarks by the powers that be, though this, too, is of course important. They must also reach beyond the surface of public discourse and popular opinion, to the deeper social structures of education and employment, ensuring that present and future generations of Ethiopian Israelis will be empowered to meet the professional goals that will redound to their own, and, even more so, to their nation’s benefit.

The author, a social activist on behalf of the Ethiopian Jewish community, served in the Israel Police. He holds a master’s degree in community leadership and philanthropy from Hebrew University and is currently pursuing a doctorate in educational leadership and administration, while studying for rabbinic ordination.
Advertisement
Subscribe for our daily newsletter