Zero tolerance for violence in Jerusalem 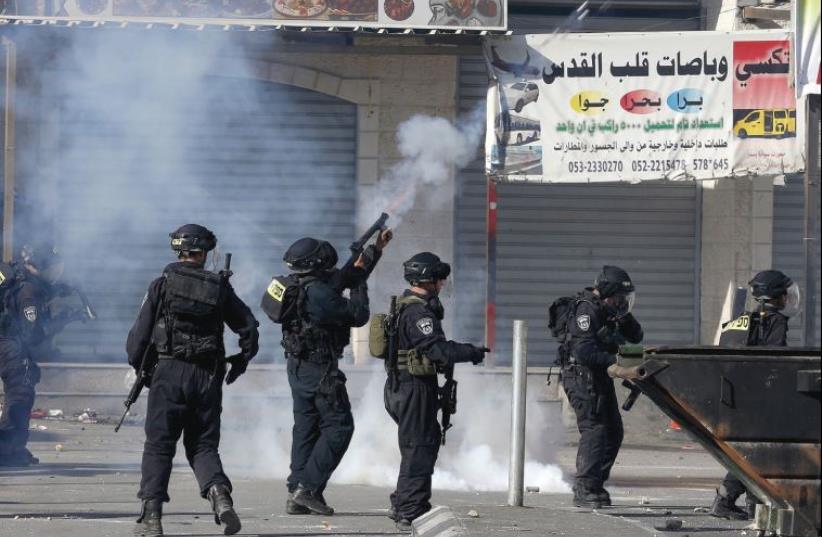 BORDER POLICEMEN fire tear gas at rock-throwers in the Shuafat refugee camp in northeastern Jerusalem on Friday
(photo credit: REUTERS)
Advertisement
‘Pray for the peace of Jerusalem,” we read in the Psalms.But some people, it is clear, are not reading their Bible.The renewed Arab violence which desecrated the Holy City over the Rosh Hashana holiday must be nipped in the bud.The violence over the Jewish New Year was a deadly reminder that stones can kill, when 64-yearold Jerusalem resident Alexander Levlovitch lost control of his car and plunged to his death after his vehicle was pelted with stones.Nor did the violence did begin – or end – there. Elsewhere in and around the capital, Israeli motorists and security officials have been stoned and assaulted with firebombs. However, unless there are serious injuries, these items rarely make the headlines, let alone pop up on the radar screen in the international press.There must be a policy of zero tolerance for violence in Jerusalem – especially in Jerusalem.We must remember that words too can kill. The cynicism and manipulation by the Palestinian Authority leader Mahmoud Abbas and an array of Arab leaders who have rushed to condemn Israel – yes Israel – for the violence in Jerusalem in an effort to prop up their own internal agenda is nauseating. Is it any wonder most Israelis have lost faith in Abbas as a peace partner? The ever-so-neutral words coming from the White House, calling on all sides to “exercise restraint” and “refrain from provocative actions and rhetoric” were also deeply disquieting at best. These are the comforting words from the leader of the free world, and our closest ally? No country in the world would condone such violence in its cities let alone its capital. Clearly, in a city holy to all faiths, all extremist acts must be condemned unequivocally, irrespective of who commits them.But in this case the firefighters are being confused with the arsonists.“Without Jerusalem, the Land of Israel is as a body without a soul,” the Hebrew writer and Zionist leader Elhanan Lewinsky once said.We are determined to bring the peace back to Jerusalem – to body and soul.The writer is minister for social equality.