ISIS’s tactic of arming children on a mass scale changes the rules and requires taking a new look at how to apply the laws of war. 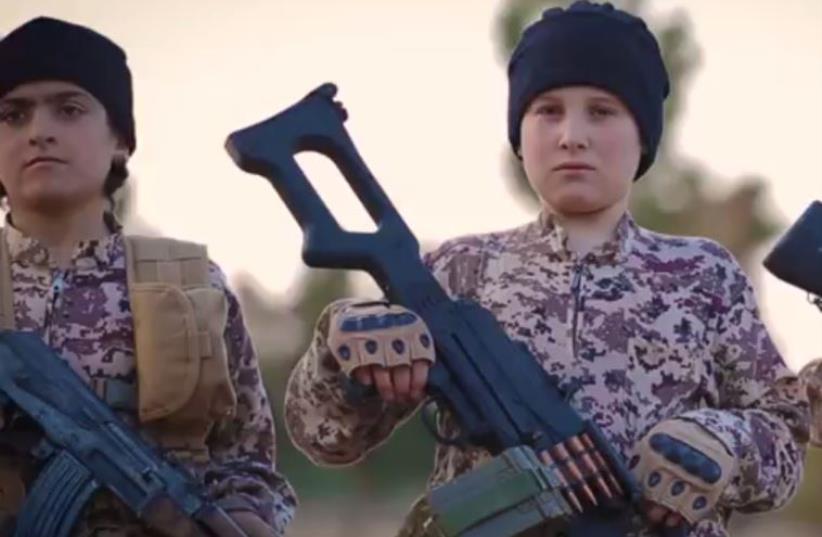 ISIS child militants sing in French
(photo credit: screenshot)
Advertisement
Though children have always had a protected status in war, armed ISIS children may be targeted under the laws of armed conflict, IDC Herzliya Prof. Daphné Richemond- Barak told The Jerusalem Post.“If children are holding a gun then direct participation in hostilities rules apply to children... children might be targets and not just victims,” she said on Wednesday.Richemond-Barak and Syracuse University Prof. William C. Banks spoke to the Post in the midst of the International Institute for Counter-Terrorism Conference in Herzliya, discussing a range of battlefield and law issues ranging from subterranean warfare to new standards for targeted killings. The premise of Richemond- Barak’s comments about armed ISIS children as targets is that until ISIS started to use them on a mass scale, the issue of Western countries going up against large numbers of children simply had not come up. That meant that children were victims and protected from targeting as a given. ISIS’s tactic of arming children on a mass scale changed that paradigm and required taking a new look at the “new battlefield” and how to apply the laws of war.Regarding the sea change of new issues confronting military lawyers on the battlefield, Banks noted that his university and the International Institute for Counter-Terrorism started to work on solutions to these issues dating back to 2006.Banks said, “During the 2006 Lebanon war we were here are on the IDC campus... mulling over what was happening. It was clear from the circumstances that the framework we had been using in the West and in Israel was ineffective because the fighting was of a new kind.”He said that currently many Western adversaries “do not use uniforms, use unconventional tactics, unconventional weapons, are failing to follow the laws of war, are hiding in civilian neighborhoods and are [using human] shielding.”The Syracuse University professor said that the legal framework needed to be updated to deal with challenges posed by non-state actors abusing the laws of war, while remaining committed to principles such as “the rule of law, protecting civilian and treating all combatants with dignity according to the laws of war.”Richemond-Barak added that in 10 years of conferences, their group of US, Israeli and other legal scholars have “always tried to invite a mix of military officials... to get them in with the lawyers, because the dialogue is so important, the conversation between lawyers and nonlawyers... we need to impact policy decisions at the operational level.”Further, she said, “it is important that” many of the meetings “take place in Israel,” since the country is the front line where so many issues arise.Addressing another new issue, Banks said that the US and Israel were revealing far more information about what intelligence and other issues led to attacks that ultimately led to harming civilians, even if the harm to civilians was unintentional.One example was the 2015 mistaken US attack on a hospital in Kunduz, Afghanistan, which killed 42 people innocent civilians. Banks complimented the US for unprecedented disclosure of how the mistaken attack had occurred and for its disciplining of more than a dozen military personnel.However, human rights groups had criticized the US for not fully disclosing how and why its intelligence failed and for not criminally prosecuting its soldiers involved.Banks said, “Both Israel and the US government have made more concessions toward transparency in this area than any other Western government since World War II; whether we will see more is doubtful.”He emphasized that despite opinions by some UN and human rights officials that state investigations of civilian casualties in war must reveal more of what led to intelligence mistakes, states have a “firm cultural norm to protect their intelligence sources and methods.”Richemond-Barak referred to the dilemma of how Western countries can uphold their obligation to warn civilians to leave an area they plan to attack when relating to tunnel warfare.She threw out the possibility of broadcasting “a very loud sound underground,” but added she was “not sure it could work” and that to date no country has come up with a warning that could be implemented.Explaining that standard warnings currently involve dropping leaflets and sending text messages, Richemond- Barak emphasized that these cannot be done in practice in the tunnel context no matter the good intentions.She offered that new perspectives on new battlefield situations must also be ready to admit that obligations such as the duty to warn may sometimes “be virtually impossible to implement.”