Evidence of 2,000-year-old battle for Jerusalem unearthed in City of David

"These finds tell the story of the last battle between the Roman forces and the Jewish rebels who had barricaded themselves in the city, a battle that resulted in the destruction of Jerusalem." 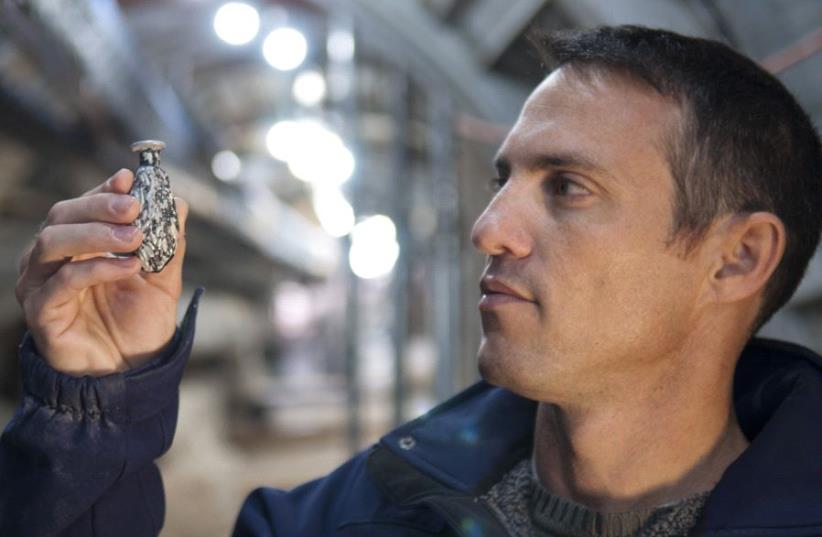 Nahshon Szanton holds a date-shaped glass juglet that was uncovered in the excavations of the street
(photo credit: SHAI HALEVY/IAA)
Advertisement
To mark Jerusalem’s jubilee commemoration of the Six Day War, the Antiquities Authority on Thursday unveiled relics from the 2,000-year-old battle for the capital that took place on the eve of the destruction of the Second Temple.The findings, including well-preserved arrowheads and stone ballista balls, were discovered on the main road through the city to the Temple Mount, in an excavation that has been ongoing for several years.“These finds tell the story of the last battle between the Roman forces and the Jewish rebels who had barricaded themselves in the city, a battle that resulted in the destruction of Jerusalem,” the Antiquities Authority said.The ballista stones exposed in the excavation are evidence of the battle of Jerusalem that was fought 2,000 years ago (CLARA AMIT/IAA) “This battle is described by the historian Flavius Josephus [born 37 CE]: ‘On the following day the Romans, having routed the brigands from the town, set the whole on fire as far as Siloam (Josephus, Wars, Book 6:363).’” According to Nahshon Szanton and Moran Hagbi, directors of the excavation on behalf of the authority, the ballista balls were fired by Roman catapults used to bombard Jerusalem during the siege of the city. The arrowheads, they said, were used by the Jewish rebels.Another section of a street some 100 meters long and nearly eight meters wide, paved with large stone slabs, was previously exposed in the excavations.The archeologists said advanced research methods reinforce the understanding that King Herod was not solely responsible for the large construction projects of Jerusalem at the end of the Second Temple period.“Recent research indicates that the street was built after Herod’s reign, under the auspices of the Roman procurators of Jerusalem, and perhaps even during the tenure of the Roman governor Pontius Pilate, who is also known for having sentenced Jesus to death by crucifixion,” said Szanton.“This conclusion sheds new light on the history of Jerusalem in the late Second Temple period, and reinforces recognition of the importance of the Roman procurators’ rule in shaping the character of Jerusalem.”Dr. Yuval Baruch, the Antiquities Authority’s Jerusalem region archeologist, said the researchers intend to uncover the entire length and width of the street within five years to complete the excavation of the site, which was first discovered a century ago.“In fact,” said Baruch, “one can consider the current excavations in the City of David a natural continuation of the previous archeological excavations of the site, which were begun in the past by European and American scholars.“About four years ago, archeological excavations were renewed along the street, this time in order to expose its full length and width. When the excavations are completed, the remains of the street will be conserved and developed and made ready to receive the tens of thousands of visitors who will walk along it.”Noting the historical importance of the site and its finds, Antiquities Authority scientists utilized cutting- edge research methods from the fields of natural science, biology and geology in their excavations.“A combination of these advanced techniques makes the excavation of the steppedstreet in the City of David exceptional in its scientific quality and importance in the development of archeological research in Jerusalem, and Israel in general,” said Szanton.“And they enable researchers to address questions that have not yet been studied.”Hagbi said the current excavations also focus on exposing the area adjacent to the street, as well as the shops that were alongside it.“Finds revealed in the excavations will allow researchers to answer such intriguing questions as: What did the main street that led to the Temple [Mount] look like? What was the urban nature of the lower city that extended on either side of the magnificent road? What did they eat in Jerusalem during the difficult siege, etc.? “In order to answer these questions, a multidisciplinary study is being conducted, as well as careful wet sifting at the sifting site in the Zurim Valley National Park, where even the smallest finds are collected.”Archeologists think that it will not be long before it will be possible to walk along one of the main streets of ancient Jerusalem and receive answers to fascinating historical questions.
A section of the stepped-street dating to the Second Temple period (SHAI HALEVY/IAA)
Advertisement
Subscribe for our daily newsletter