Did you help fund the building of Jerusalem back at the turn of the century when it was transitioning from a desert wasteland into a world class city?

By DAVID SIDMAN
(photo credit: INGIMAGE)
Advertisement
Did you help fund the building of Jerusalem back at the turn of the century when it was transitioning from a desert wasteland into a world class city? If the answer is no, this could be your second chance.
That’s because Biblical Israel’s original capital is at that very stage as we speak. And you can claim your stake in its rejuvenation. In case you don’t know what city i’m referring to: it’s Hebron.
Background
Home of the Maarat Hamachpelah (tomb of the Patriarchs), Hebron was the first piece of real estate purchased by the first Jew – Abraham. Rich in Biblical history, this ancient treasure of a town was then conquered by Caleb. It is also where King David was instructed by God to establish his kingdom before taking Jerusalem. It’s also the burial site of Yishai, King David’s father and Ruth, his great grandmother.
Today, the Hebron fund is kicking off a 24-hour ‘Give-a-thon’. Their goal: to raise $1 million for Israel’s most ancient and fastest growing city – Hebron.
Trump’s Announcement
That’s because after the Trump administration announced that settlements like Hebron are legal under international law and Defense Minister Naftali Bennett gave authorization to rebuild a new Jewish residential project in the town’s Wholesale market, the city’s Jewish community is undertaking some rather ambitious plans.
Raising funds
That’s why the Hebron Fund, a non-profit who works to improve the Jewish quarter of the city is running a 24 hour fundraising campaign. The campaign’s objectives are divided into three elements as the city’s spokesman, Yishai Fleisher breaks it down:
Click to Donate
The first part is the expansion element. “There’s an alignment between the US and Israel to see Jewish Hebron flourish. This comes on the heels of Pompeo’s statement that Jewish settlements  in Judea and Samaria are legal. It’s a big deal because it means we can go ahead and build in Judea and Samaria” Fleisher explains. 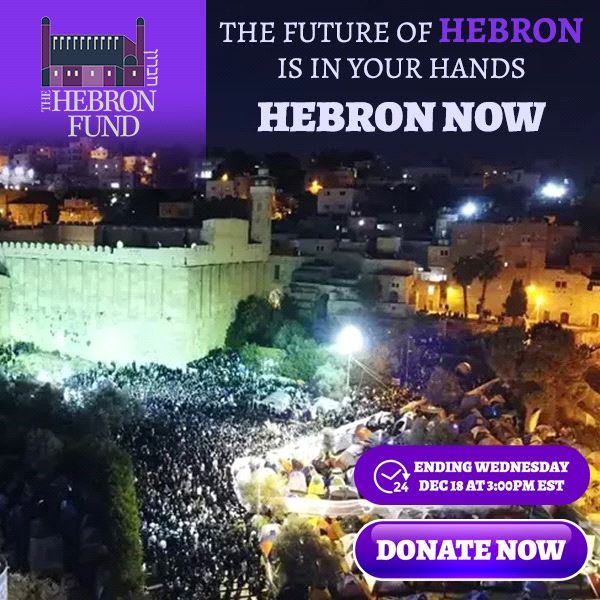 Houses of Worship
The funds that the Hebron Fund receives will go directly to expanding the parks and recreation as well as synagogues that will inevitably dot the landscape in the city’s near future.
It’s chilly
The second element is the fact that it’s now winter. Most people don’t realize how bitterly cold it can get in Hebron during the winter months. That’s why Fleisher stressed that the funds you donate today will go towards insulating homes and kindergartens. After all, Jewish heroes living in a city surrounded by thousands of bloodthirsty Jihadi terrorists shouldn’t have to add heat to their list of problems. “We want to strengthen the residents and their children to stay warm this winter because all of these people are front line soldiers” Fleisher opined.
Illumination
The third element is a big plan to light up the tomb of the Patriarchs at night – just like the old city. This initiative fits in nicely with the upcoming Hannukah holiday – the festival of lights. Your contributions can go to illuminating the oldest standing structure in Israel- the Tomb of the Patriarchs in Hebron making it a tourist attraction and holy pilgrimage site during both the day…and the night as well.
So what are you waiting for? Your contributions will go directly to improving an ancient holy city that’s been largely ignored by far too many Jews and Christians. Help Hebron reach its potential, just like what was done in Jerusalem.
Honor thy forefathers
After all, we all try to emulate Abraham’s hospitality and love of the land. Why not join the Jewish community of Hebron in honoring Abraham’s memory both in life and in death. Our forefathers live within all of us. Now’s your chance to honor them as they look down from above. So stop what you’re doing and support this holy cause today. Donate to the Hebron fund now. You have 24 hours…Go!
Reprinted with permission from Breaking Israel News)