Living in the golden age of semiconductors

In the midst of a fascinating interview discussing current and future trends in hi-tech, Yaniv Garty, Intel Israel’s CEO, almost apologetically interjects, “Let me speak for 90 seconds about Intel Israel.” Singing the praises of Israel’s largest hi-tech company can take much more than a minute and a half, but Garty succinctly captures the company’s essence with three impressive numbers. Intel Israel today employs 12,000 workers in Kiryat Gat, Haifa, Jerusalem and Petach Tikva. The company exported over $8 billion of products from Israel last year, which makes up 2 percent of Israel’s total gross domestic product. Finally, Intel Corporation, over the years, has invested $45 billion in Israel in capital investments and acquisitions.

Intel Israel focuses on five areas of development, including computers, communication, artificial intelligence, cyber-security, and manufacturing. “In some ways,” says Garty, “Intel Israel is a microcosm of the parent Intel company, developing and manufacturing the technologies and products at the forefront of the digital transformation.”  That’s quite an accomplishment for a company that began in a small Haifa office in 1974 with just five employees. 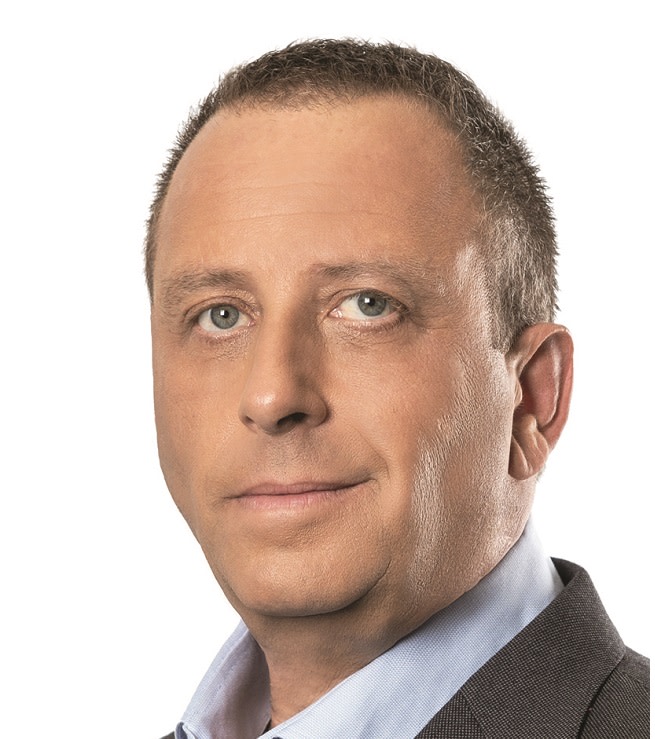 The world has undergone a path of digital transformation over the past few years that was accelerated by the pandemic, says Garty. Everything digital runs on semiconductors, explains Garty, including smartphones, computers, TVs and even cars manufactured within the past ten years. To illustrate the tremendous amount of computing power in today’s chips, Garty holds a 1 cm x 1.5 cm Intel CPU (central processing unit), which includes 100 billion transistors. He says that ‘Moore’s Law,’ which posits that the number of transistors in a dense integrated circuit (IC) doubles every two years, still holds true. He adds that in addition to chip density, additional technologies, such as power consumption, must evolve to maintain computer efficiency.Garty explains that the continued demand for more powerful computers and digital services can be divided into four main areas: ubiquitous computing, which allows people to interact with technology anywhere; cloud and edge computing, in which part of the computing world is not physically connected to the user’s device; pervasive connectivity, in which everyone can communicate instantly; and artificial intelligence. Regarding AI, Garty says, “We envision that within this decade, more decisions will be made by artificial intelligence techniques than by humans. Part of our job is not just to enable the technology but to make sure that they are ethical and good decisions.”Intel worldwide will continue to develop technology in these four vectors, says Garty. Intel is one of the three major semiconductor manufacturers in the world today, along with Samsung in South Korea and TSMC in Taiwan (one of Intel’s semiconductor factories is in Israel in Kiryat Gat). It is estimated that by the end of the decade, the semiconductor market will be valued at one trillion dollars. Intel is undertaking a new strategy to make semiconductors at its FABs (semiconductor fabrication plants) for competitors.

Garty acknowledges that Intel’s leading position in Israel’s hi-tech market carries a large degree of responsibility. “We can’t successfully operate a company without a strong society,” he says. To that end, Intel advances multiple projects in diversity and inclusion, STEM education, green energy and many others. One example is Intel’s AI for Youth program, which teaches young students the digital skills needed for the 21st century, such as high-level problem solving, project presentations and interdisciplinary thinking.Intel integrates workers from different backgrounds into its workforce, and Garty says Intel is committed to advancing diversity and inclusion at every level. “Diversity and Inclusion are key to innovation. Intel employs a large number of Israeli Arabs, and more than 700 are registered in the Israeli Arab community at Intel. “They reach out to their communities, and help kids, highlighting what they will experience if they go into hi-tech,” says Garty. He adds that Intel Israel employs a large number of men and women from the Haredi community as well.

Yaniv Garty believes Israel’s success in hi-tech can be attributed to a number of factors, including its unique cultural attributes and the fact that the country had to stand alone and not rely on others for assistance. “Here, you need to do the stuff on your own, and no one will do it for you,” he points out. In addition, Israel has a number of successful ‘talent engines,’ including the country’s universities and the IDF. Ultimately, says Garty, one of the key reasons for Intel Israel’s success is the fact that its employees know that they can impact the lives of millions through their efforts. Where does Intel Israel see itself in the next five to ten years? “We are on a mission to deliver leadership products across all of our businesses,” says Garty.” He summarizes: “Intel is an industry leader, creating world-changing technology that enables global progress and enriches lives. Inspired by Moore’s Law, we continuously work to advance the design and manufacturing of semiconductors to help address our customers’ greatest challenges. By embedding intelligence in the cloud, network, edge and every kind of computing device, we unleash the potential of data to transform business and society for the better.”

This article was written in cooperation with Intel Israel