Israeli defender Dan Mori was denied entry to the country for a training camp with world governing body FIFA. 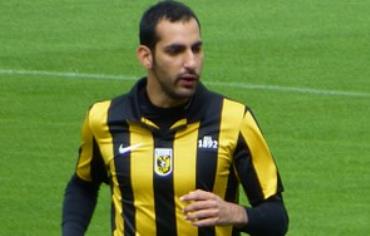 Vitesse defender Dan Mori (Wikimedia Commons)Dutch club Vitesse Arnhem are to take up the refusal of the United Arab Emirates to allow Israeli defender Dan Mori entry to the country for a training camp with world governing body FIFA, the club has said.A shift to a stronger stance comes as political condemnation was ratcheted up on Vitesse as Mori, who was refused entry because the UAE does not recognize Israel, was left behind while the rest of the team travelled to Abu Dhabi on Sunday."We are upset that we have become part of a political struggle and afterwards we will seek to take this matter up with FIFA," club spokeswoman Esther Bal said in a Dutch NOS television interview on Monday."Both the United Arab Emirates and Israel are members of FIFA and in this sense it is strange that a footballer should be shut out of a training camp," she added."We are upset that what was supposed to be a good opportunity to prepare for the second half of the season is now overshadowed by this incident."We had verbal permission that Dan Mori would be allowed to travel with the team to Abu Dhabi but we were then told the day before that he could not. It came as a surprise to us."We are a football team and not a political party. We made commitments to play matches against (German Bundesliga clubs) VfL Wolfsburg and Hamburg SV and we do not want to let them down."It is also part of our planning for the resumption of the season and the players themselves also want to travel to keep up the team building process."Vitesse arrived in Abu Dhabi on Sunday without Mori, who stayed behind to train with the reserves.Dutch politicians said the club's decision to go ahead with the visit was "cowardly" with finance minister Jeroen Dijsselbloem voicing his opinion on a television discussion program on Monday."Vitesse should have said in principle that 'this is our team and you must accept all of us or we will not travel.' That applies also to the KNVB," he said.The Dutch FA (KNVB) said it would not be getting involved in the row. "It's a political question," a spokesman told reporters on Monday.Israeli tennis player Shahar Peer was also refused permission to compete in a UAE tournament in 2009.Surprise package Vitesse are second in the Dutch championship, on the same points as leaders Ajax Amsterdam. The league resumes after a winter break on the weekend of Jan. 17-19.Mori, 25, joined the club from Bnei Yehuda Tel Aviv in 2012.
Advertisement
Subscribe for our daily newsletter