Short-track speed skater Vladislav Bykanov will be the first team member to compete on Monday; Israelis will also participate in figure skating and skiing events.

By ALLON SINAI
Olympic rings in the Coastal Athlete's Village in Sochi, February 4, 2014
(photo credit: REUTERS)
Advertisement
Short-track speed skater Vladislav Bykanov will carry the Israel flag in Friday’s Opening Ceremony of the Winter Olympics in Sochi.Israel has sent five athletes to Russia, two more than it did to the Games in Vancouver four years ago.Israel has never sent more than five athletes to a Winter Olympics, with the delegations in 2002 and 2006 also numbering five members.The team in 1998 totaled three athletes, with figure skater Michael Shmerkin being the country’s lone representative in Lillehammer in 1994 in what was Israel’s debut at the Winter Games.Bykanov will also be the first Israeli to compete in Sochi when he takes part in Monday’s 1,500-meter short track event.The 24-year-old, who moved to Israel from Ukraine in 1994, will also participate in the 500m and 1,000m races and is aiming to reach the quarterfinals in all three of his events.Israel’s figure skaters will also all be in action next week, with the duo of Evgeni Krasnopolski and Andrea Davidovich to compete in the short program of the pairs event on Tuesday and in the free skating the following day.Krasnopolski and Davidovich, who are based in Hackensack, New Jersey, booked their place at the Olympics in the Nebelhorn Trophy, the final qualifying event for the 2014 Games held in September, by ending the pairs’ competition in 10th place. 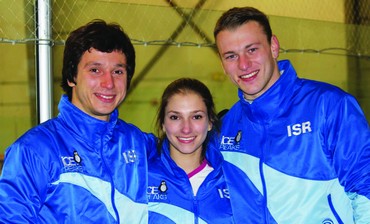 Alexei Bychenko, who also trains in Hackensack, will compete in the men’s figure skating competition next Thursday and Friday.Bychenko, 26, ended this year’s European Championships in 14th place and qualified for the Olympics by finishing in fifth place in the Nebelhorn Trophy.According to the Olympic Committee of Israel, Bychenko is expected to finish at least among the top 24 skaters, while Krasnopolski and Davidovich should come in among the top 16.Skier Virgile Vandeput will compete in the second week of the Olympics when he takes part in the giant slalom (February 19) and slalom (February 22).Vendeput is expected to finish among the top half of skiers in both events.