Israeli politicians line up to rub shoulders with Messi, Barcelona

World-famous Catalan outfit arrives in Holy Land; Peres says Iniesta, Xavi, and Messi can teach how to strive for peace.

By JPOST.COM STAFF
Prime Minister Binyamin Netanyahu greets FC Barcelona 37 150
(photo credit: GPO / Moshe Milner)
Advertisement
FC Barcelona, arguably the world's most popular soccer team, arrived in Israel and the Palestinian territories on Sunday for a goodwill visit.The Catalan team met with the nation’s leading dignitaries, including Prime Minister Binyamin Netanyahu, President Shimon Peres, and government ministers and lawmakers.“Iniesta, Xavi, and Messi can teach us and the Palestinians a thing or two about scoring that goal we all strive for, the goal of peace,” Peres told them in a welcoming ceremony.FC Barcelona is in Israel as part of a “peace tour” that will include a special open practice that will be attended by Jewish and Muslim children at Bloomfield Stadium in Tel Aviv.“Your visit here is a significant contribution to peace, and you have come to Israel at the right time, the time when the government has begun its own ‘journey to peace’ between us and the Palestinians,” the president said.Netanyahu also addressed the team following its earlier visit to holy sites in Jerusalem. 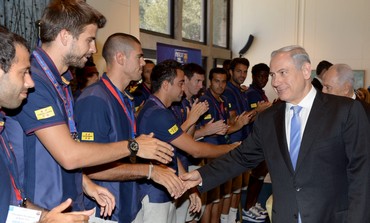 “In Israel, there are many sites that are sacred to Judaism, Christianity, and Islam,” the premier said. “My dream is to see soccer, peace, and security, and one percent of your fans visiting these wondrous places.”Tourism Minister Dr. Uzi Landau presented a Goodwill Ambassador for Israel certificate to Sandro Rosell, the club president. During their visit to the Western Wall, the minister met the team, including Lionel Messi, Gerard Pique, Andrés Iniesta, Xavi Hernández, Carles Puyol, and the latest signing Neymar da Silva, who placed notes in the wall.,

Tourism Minister Dr. Uzi Landau welcomed the visiting team and their entourage: "Welcome to Israel! For us, first and foremost, you have come to Israel as tourists, and not just regular tourists – your arrival here has turned into a national celebration. I present you with this certificate, with gratitude and in the hope that you will share your experiences about the real Israel with family and friends on your return home."

The minister added: "The Tourism Ministry sees great value in the visit of the Barcelona football club in encouraging tourism to Israel. Football is an international language and it is enough that millions of Barcelona fans around the world will see photos and video of their team visiting the Western Wall, places of entertainment and other tourism sites in Israel in order to promote tourism to Israel.”
Advertisement
Subscribe for our daily newsletter