By JPOST.COM STAFF
SEPTEMBER 8, 2013 11:31
CNN video showing Syrian victims of attack 370
(photo credit: YouTube Screenshot)
Advertisement
The American-based cable news station CNN released footage on Saturday that appears to show Syrian victims of last month’s alleged chemical weapons attack.These images are disturbing. Viewer discretion is advised.
The video was obtained by CNN after the Obama administration had shown it to American lawmakers as part of its effort to garner support for military action against the Bashar Assad regime, which it accuses of using sarin gas against the civilian population. 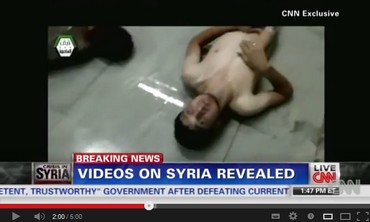 According to CNN, the videos were shown to members of the Senate Intelligence Committee during a classified briefing. American intelligence agencies believe the videos to be authentic, CNN reported.In the video, Syrians, including many children, are shown as they are being treated for what is purportedly a chemical weapons attack. There are 13 videos total, each of them showing the victims convulsing while receiving treatment from aid workers.CNN reported that American intelligence organizations have verified the authenticity of the images, and that apparently has convinced the Obama administration of the necessity to launch punitive strikes against the Assad government.
Advertisement
Subscribe for our daily newsletter