This week: Mitt Romney picks Rep. Paul Ryan to run in the VP slot, and the campaign conversation takes a fiscal turn.

By NIV ELIS
USelections2012
(photo credit: Supplied)
Advertisement
Wisconsin Rep. Paul Ryan is in many ways the anti-Sarah Palin. A policy wonk with years of political experience in Washington, the white, male congressman is in many ways a “safe” choice as Republican candidate Mitt Romney’s running mate. Given that Palin, Senator John McCain’s 2008 VP choice, was ultimately seen as a major liability to that campaign, it is understandable the Romney would want someone “safer.” Yet, like Palin, Ryan’s addition to the ticket is being called a “game changer” for the US Presidential race, as the wave of instant reactions on Twitter this week made clear.Like the US Supreme Court’s decision on healthcare and US President Barack Obama’s “evolution” on gay marriage before, the VP announcement consumed the debate on Twitter, filling most of the slots on the micro-blogging site’s “trending” list. Sitting comfortably at the very top: #RomneyRyan2012.Tweet of the week: 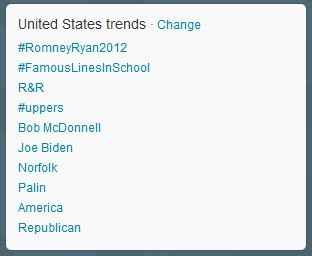 The other entries that made their way onto the list indicate other topics that Twitter-using Americans were talking about: Virginia Governor Bob McDonnell, who introduced Ryan (and was a close second choice for the VP slot himself), Norfolk, VA, where the announcement was made, the Republican party, the fate of America, and, inevitably, Sarah Palin (who finally got her own Batman comparison).

Sarah Palin was like The Joker: insane and interesting. Paul Ryan is like Bane: more threatening but also way more boring.

Palin herself reacted positively to the announcement, writing a lengthy Facebook message in which she congratulated Romney, slammed Obama, and urged voters not to forget the importance of Senate and House races - in which her endorsement has been influential. She also announced that, like former US president George W. Bush, she would not be participating in the Republican National Convention at the end of the month.The choice of the charismatic Ryan, who authored a controversial budget proposal that would slash Medicare benefits, will likely turn the campaign’s attention to fiscal issues. When Romney accidentally introduced him as “the next president of the United States,” some Republicans wished that he was, in fact, on the upper half of the ticket instead of the ever-stiff Romney, whose likability ratings lag behind Obama’s. They salivated over what a debate between Obaa and Ryan, hailed as a party “intellectual” and ideological leader, would look like. The Internet soon obliged, with a YouTube clip showing the two going head-to-head over the budget in 2010.Viral Video of the Week:Although disaffected Republicans and Democrats alike got their suggestions of #BetterPresidentialticket teams trending within hours of the announcement, the biggest loser in the whole Twitter discussion was doubtless sitting US Vice President and gaffe-master Joe Biden, whose ability to effectively debate Ryan was repeatedly called into question:

BREAKING: Joe Biden has been put in the Economics 101 Witness Protection Program until the VP debate. #RomneyRyan2012

Meanwhile, as hilarious memes on the Romney-Ryan ticket exploded across the Internet, a newly created VP-specific Twitter account for Ryan racked up 22,000 followers in a matter of hours, and has since reached almost 100,000:

Though not an avid Tweeter in the past, Paul Ryan’s original account made a strong statement in its own way. It only follows one other Twitter account: The national debt clock, which tweets the nation’s rising debt burden on a daily basis.#USelections2012 offers weekly insight into the US presidential election through a social media lens, tracking candidates as they try to reach 270 electoral votes in 140 characters or less.The writer is a Breaking News editor and blogger at The Jerusalem Post. Read his blog ‘The Bottom Line’ here.
Advertisement
Subscribe for our daily newsletter