#USelections2012: Politics gone to the dogs

By NIV ELIS
APRIL 24, 2012 07:20
Obama with Bo the dog 370
(photo credit: The White House)
Advertisement
The cut-throat world of electoral campaigns may be a jungle, but seldom have actual animals played such a prominent role. Last week, floundering Republican candidate and animal lover Newt (i.e. Gingrich, not the amphibian) made more headlines when than he for anything policy-related. Elsewhere, a certain Donald (i.e. Trump, not Duck) threw First Lady hopeful Ann Romney a birthday party featuring a cake adorned with a chocolate sculpture of her riding a horse.But, of course, the real meat of the fight took place between donkeys (D) and elephants (R) as US President Barack Obama and presumed Republican challenger Mitt Romney and their teams locked horns over a truly beastly matter.For months, the Democrats have been chiding Romney over his admission that once, heading out for a family vacation, he transported the family dog in a crate tied to the roof of his car. Under the banner of animal cruelty, a dedicated Democrat even made a website devoted to the subject: Dogs Against Romney.Quite understandably, the Romney campaign sunk its teeth in when the online newspaper The Daily Caller threw it a bone by unearthing a juicy piece of canine cruelty in Obama’s past. In his book “Dreams of My Father,” the Caller noted, Obama wrote of eating dog meat as a child in Indonesia:
With Lolo, I learned how to eat small green chill peppers raw with dinner (plenty of rice), and, away from the dinner table, I was introduced to dog meat (tough), snake meat (tougher), and roasted grasshopper (crunchy).
With the cat out of the bag and the dog out of the oven, Twitter lit up with amusing takes on the President's choice of chow, many of them aghast that Obama once swapped mutton for mutt.

TweetArmed with fresh ammunition, Romney advisor Eric Fehrnstrom (of Etch A Sketch fame) threw a January Tweet from Obama strategist David Axelrod on the Romney dog issue right back in his face.Tweet of the week: 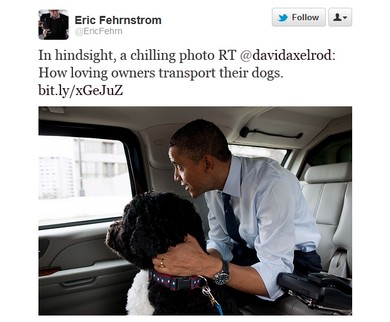 TweetTweeters dishing their favorite jibes at the president used the hashtag #ObamaDogRecipes, which trended on the social networking site amidst the dogfight. Mentions of the word “Dog” skyrocketed: 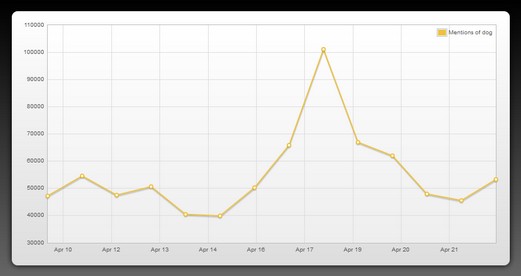 Dog mentions on Twitter (Courtesy: Topsy)But despite all the rabid talk of eating dogs, Romney was unable to completely lick his own puppy scandal. In a Diane Sawyer interview with Mitt and Ann last week, the couple once again were questioned on the issue, and maintained that their dog rather enjoyed traveling atop the car.Viral Video of the Week:

In a time of economic distress and global instability, it may not be the most enlightened conversation for leaders to engage in. But seeing as only the strongest survive in dog-eats-dog elections, the emergence of incumbent-eats-dog politics should come as no surprise.

Click here for special JPost coverage#USelections2012 offers weekly insight into the US Presidential election through a social media lens, tracking candidates as they try to reach 270 electoral votes in 140 characters or less.The writer is a Breaking News editor and blogger at The Jerusalem Post. Read his blog ‘The Bottom Line’ here.
Advertisement
Subscribe for our daily newsletter