This Week: Obama takes a drubbing in the first presidential debate; Romney puts Big Bird on the chopping block.

By NIV ELIS
Romney delivers major foreign policy speech 370
(photo credit: REUTERS/Shannon Stapleton)
Advertisement
It was a week of achievements in US politics. Some 67.2 million Americans turned on their televisions to watch US President Barack Obama and his Republican rival Mitt Romney face off in the first presidential debate, giving it a higher viewership than any presidential debate in 20 years. Known for his charisma and strong communication skills, Obama turned in a lackluster performance against an energized and vivacious Romney, usually known for his sclerotic speaking style. And Twitter set a new record for number of tweets during a political event, surpassing the level set a the Democratic National Convention. 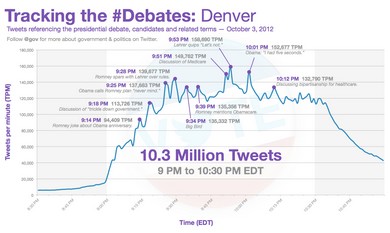 US election graph
NB: Click on image to enlarge.While most of the media coverage focused on Romney’s much-needed turn-around after a very bad month in his campaign, Obama’s impatient, professorial and disinterested demeanor and both candidates’ loose relationships with the facts in the policy debate, Twitter shed light on the topics that dominated the conversation of the chattering class.One such topic was the seeming inability of the debate’s moderator, Jim Lehrer, to exert any control over the sparring candidates or enforce time limits. A mock account, @SilentJimLehrer, picked up nearly 10,000 followers as the moderator’s name trended on the micro-blogging site.

But the issue that struck a chord above and beyond talk of entitlements and taxes, Obamacare and unemployment, was the fate of beloved Sesame Street character Big Bird.Speaking of items he would cut from the federal budget, Romney looked right at the moderator, a former news host on the publicly supported PBS network (that also produces Sesame Street) and said, "I'm sorry Jim, I'm gonna stop the subsidy to PBS, I'm gonna stop other things. I like PBS, I like Big Bird, I actually like you, too, but I am not going to keep spending money on things to borrow money from China to pay for."Lo and behold, Big Bird spent over a day on Twitter’s trending list, and another mock account, @FiredBigBird, racked up some 30,000 followers (despite being ).

The official Sesame Street Twitter account even got in on the fun, but PBS soon posted a serious response denouncing Romney’s comment.Tweets of the Week:

Big Bird: My bed time is usually 7:45, but I was really tired yesterday and fell asleep at 7! Did I miss anything last night?

In most debate contexts the Big Bird comment would be considered a major gaffe (analysts note that Sesame Street is popular, and eliminating the roughly .01 percent of the federal budget devoted to funding PBS would only take a drop out of the sea of US debt), but in the face of Obama’s drab performance, Romney still won the debate handily - a fact reflected in the polls.Next Media Animation, a Japanese outlet that sets news stories to strange (and often hilarious) animations, presented Romney’s “knockout” performance in its own special way, depicting Romney literally punching Obama.Viral Video of the Week:But Obama has proven time and again that even when he missteps, luck intervenes. Just two days after the disastrous debate, new jobs numbers indicated that unemployment had fallen below 8% for the first time in his presidency, giving a boost of optimism for both the economic outlook and Obama’s reelection odds.Yet not everyone was pleased by the jobs numbers; several conservative commentators wondered aloud whether there was political interference in the numbers. Former General Electric CEO Jack Welch found himself in some hot water for expressing that sentiment on Twitter.

While the conspiracy theory was tempting, like so many accusations lobbed in an election year, it did not hold up to scrutiny.But reality is secondary in politics. The storm of faulty numbers, facts, accusations and, of course, gaffes is likely to only intensify in the coming week, as Joe Biden and Paul Ryan meet up for the only scheduled US vice presidential debate on Thursday.#USelections2012 offers weekly insight into the US presidential election through a social media lens, tracking candidates as they try to reach 270 electoral votes in 140 characters or less. The writer is a Breaking News editor and blogger at The Jerusalem Post. Read his blog ‘The Bottom Line’ here.