Israel’s Air Force Museum in the Negev may not be on everyone's list of must-see attractions in Israel but considering the importance of some of the exhibits, maybe it should be.

By JANIS RAISEN
AUGUST 19, 2013 12:57
IAF Museum grounds
(photo credit: Courtesy IDF Spokesperson)
Advertisement
When you approach Israel’s Air Force Museum in the Negev, you know you are in the right vicinity, as you hear the roaring sounds of planes and helicopters from the nearby Hatzerim Air Force Base. As you enter the museum grounds in the desert heat and glance at the fighter jets, helicopters, drones and enemy captured airplanes; you know that an experience of a lifetime awaits you. The Israeli Air Force (IAF) has participated in all the country's wars, and operations, so the IAF Museum is an integral part of Israeli history.The museum, located just a short distance southwest of Beersheba, was founded in 1977 on Hatzerim base and later moved to its current location in 1982. It officially opened to the public in 1991.Tours are not mandatory, but highly recommended. The museum is located on an active army base so all staff members currently serve in the air force, including the tour guides. The tour takes about one hour and is offered in English, Hebrew, French, Russian and Spanish.The more than 150 aircraft and anti-aircraft are exquisitely laid out to proudly show 65 years of Israeli aviation history. The aircraft are grouped chronologically, according to year and model, starting from 1948 with the Messerschmitt, the very first plane that Israel acquired. It was purchased from the Czechs at a critical time during the War of Independence when the Egyptians attacked Israel, not expecting an aerial attack in response. 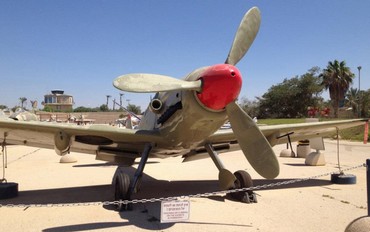 Messerschmitt, purchased from the Czechs in 1948 (Janis Raisen)The Czechs nicknamed the Messerschmitt the Mezer.Another dramatic year for the IAF was in 1953 with the arrival of the Gloster Meteor from Britain, the first jet engine fighter planes to arrive in Israel. Then prime minister David Ben Gurion nicknamed the first two jets that arrived “storm and fury” during an official ceremony. The fleet was indeed powerful and served for 19 years in the IAF. 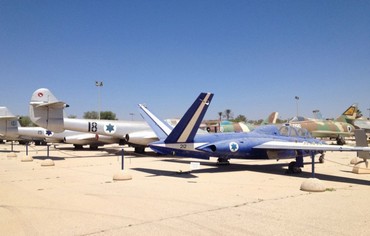 Gloster Meteor #15, #18 ( Janis Raisen)The museum also showcases planes purchased from the French, the Americans, and Israeli-made planes, the Lavi and the Kfir. 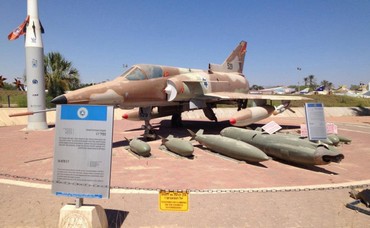 IAI KFIR C-7, developed in the 1980s and was critical for security missions along the Lebanese border (Janis Raisen)Among all the small planes lies a large Boeing 707 jetliner on the far corner of the museum. These jetliners were purchased from the American Airline, TWA, in the 1970s for large-scale missions and transport. These airplanes were responsible for rescue operations used to airlift Ethiopian Jews and were also used during “Operation Entebbe” in 1976 -- also referred to as “Operation Yonatan” after Prime Minister Binyamin Netanyahu's brother Lt. Col. Yoni Netanyahu, who was tragically killed during this complex operation. Two of these airplane models were used during Operation Entebbe: one was an air ambulance and the other served as the commander headquarters. This exact airplane was used for the commander headquarters.Visitors can board this historically significant airplane, sit down in the nicely air conditioned cabin, and watch an eight-minute documentary on the history of the IAF. 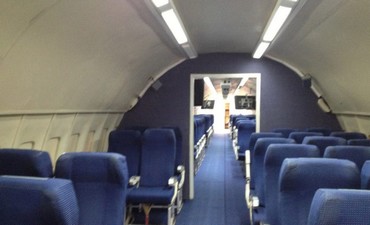 Inside the Boeing 707 ( Janis Raisen)Behind the scenes of this fascinating collection of history, is Ya’acov Terner, Brig. gen. (res), IAF museum founder, the face of the IAF and IAF museum. Terner served in the air force for 32 years in various positions: squadron commander, fighter pilot, base commander, flight instructor and flight school commander. He currently heads the museum association. His office -- a museum within a museum -- is covered with photos of the base, historic moments in the IAF, photos of politicians and model airplanes. 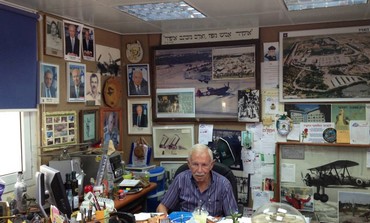 Ya’acov Terner, Brig.gen. (res), Museum Founder (Janis Raisen)Born in 1935 in Kfar Yona, Israel, Terner spent almost half of his life dedicated to the air force. As he recounts the story about why he founded the museum, his passion for the IAF and desire to preserve its special part of Israeli history is so apparent."I thought that it wasn't okay that the air force had airplanes, extremely important airplanes, which were used in many wars - the War of Independence, the Sinai War, the Six Day War, the Yom Kippur War - and the air force didn't safeguard the airplanes," Terner explains. "They gave them as presents to kibbutzim and they put them by the cheder ochel (dining hall) on the grass. They gave the rest to schools,” he adds.Many airplane models were sold and Terner felt compelled to stop this trend. A variety of models including the B-17 Flying Fortress and the Mosquito were sold, never to be seen again."We had 90 Mosquito aircraft; not one remained -- 90--," Terner repeats. He was determined to find a way to preserve the airplanes and IAF’s history, so in 1977, when he became commander of the Hazterim base, he started the museum there and it later moved to its current location. Although Terner spent 10 years in the police force following his army service and later, served as Mayor of Beersheba for 10 years, he always ended up right back where he started, at the place he had loved and shaped for many years— the IAF museum.During the late 1990s, Terner continued his mission to gather some additional missing pieces of IAF history. Three Mirage airplanes were sold to Argentina and used in the Falklands war. “I wrote a letter to the commander of the Argentinean air force and I told him that we sold the airplanes without thinking about the museum. I asked him to find and to sell back three Mirage,” explains Terner.Only one Mirage was found and was a significant one. It is the Mirage labeled #159 at the museum, which became part of the Bar Mitzvah Twins. The other twin labeled #158, stayed in Israel. Since each of these Mirage planes shot down 13 planes, they were coined the bar mitzvah twins. The president of Argentina at the time, Carlos Menem, agreed to sell the remaining one back for the symbolic cost of just $1. 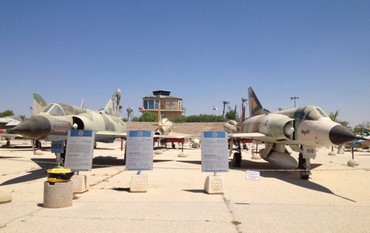 The Bar Mitzvah Twins, Left: #159 (bought back for 1$), Right: #158 ( Janis Raisen)In the enemy aircraft section of the museum, among others, lays an Iraqi, Russian-made fighter plane. An Iraqi Christian pilot, Munir Redfa, defected to Israel in 1966 with the assistance of the Mossad, one year before the Six Day War. The MIG-21, fighter plane was widely used by many countries so Israeli pilots learned about the advantages and disadvantages of this Iraqi aircraft and went into the Six Day War with critical information, according to Terner. Since this was a secret mission, the plane was named 007.The future plans for the museum according to Terner include turning over the museum association to civilians, former air force personnel, who will run the museum. And to raise money to build more hangars to protect the historic airplanes that he worked so hard to collect and preserve. “I love the museum,” Terner says.  Anyone visiting the museum will understand why Terner has worked so hard to make the museum a reality. There are lots of exhibits to see, and perhaps even one visit won’t be enough to experience such a special part of Israeli history.Janis Raisen is a freelance journalist living in Tel Aviv.
Advertisement
Subscribe for our daily newsletter