Star-studded group of actors travel around the country during week-long tour as guests of Tourism Ministry.

By ELISA MOED, GIL STERN STERN ZOHAR/TRAVELUJAH
America's Voices tour participants in Jerusalem 370
(photo credit: Courtesy Steve Waltz)
Advertisement
For further information on Christian tourism and Holy Land Tours to Israel contact Travelujah.A group of eight Hollywood TV and film stars completed a week-long tour of Israel Sunday as guests of the Tourism Ministry and the Public Diplomacy and Diaspora Affairs Ministry.The star-studded group included Anna Lynne McCord (90210 , Nip & Tuck), Omar Epps (House), Paul Johansson (One Tree Hill), Holly Robinson Peete (21 Jump St., Hanging With Mr. Cooper), Mekhi Phifer (ER, Tuskegee Airmen), Holt McCallany ( Lights Out), Zach Roerig (Vampire Diaries) and Paget Brewster (Criminal Minds).The group of actors was led by Rabbi Irwin Katsof, the director of America's Voices in Israel (AVI), which is part of the Conference of Presidents of Major American Jewish Organizations. Katsof described the celebrity mission as part of an "on-going initiative to expose the Hollywood community to a wide-range of thought-provoking cultural, historical, religious and personal encounters throughout the Holy Land." And while the participants pointed to many highlights, faith and spirituality played a starring role amongst the stars.Holt McCanally told Travelujah that he was baptised a Roman Catholic in Ireland but that  issues within the Catholic Church had caused him to view himself as an agnostic."Being at the holy places has allowed me to re-familiarize myself with my faith and it has opened certain questions in my mind," he said. " It was a wonderfully transformative experience for me," Holt McCannaly told Travelujah. "I would encourage anyone who hasn't been to Israel to come here," he said.Zach Roerig commented, "We've been busy seeing this beautiful country. I'm not walking away from Israel with a renewed sense of Christianity, I am walking away with a renewed relationship with God." He thanked Israel and said "I will forever be grateful to your country."AnnaLynne McCord is the daughter of a Christian pastor and she grew up reading the Bible two hours each day.  McCord was touched to see the sites of Jesus' passion. 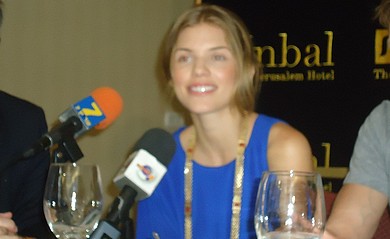 AnnaLynne McCord in Jerusalem; photo courtesy Travelujah
McCord told Travelujah that being on the Via Dolorosa was extremely powerful but it wasn't until this morning, when she was alone in her own hotel room, listening to "My Sacred King", by a band called Hillsong, that she began to process the impact, and the tears just flowed. "The lyrics talked about the scars in his hand and I was imagining Mary, his mother, and today being Mother's Day... and thinking about her and how she walked beside him. ....And I thought about myself. What if I was there? What would I be thinking and doing?.... And then it just washed over me. I realized he did all of this for me, for us."              For Holly Robinson Peete, the highlight was visiting a family on the Golan Heights and seeing first hand how Israelis deal with autism. "There is a sense of compassion in Israel that doesn't exist in America," she said.For Omar Epps and Mekhi Phifer spending Friday night with the family of Martin and Rivka Rappaport and their ten children in Jerusalem, and seeing first hand how people are welcomed into homes of strangers for the Shabbat meal created a strong emotional connection to the country and both plan to come back and bring their own children with them to Israel. "I was very privileged to be here for Shabbat. It was nice to dance in a circle [at the Western Wall]. My kippa kept falling off. I didn't expect that emotional connection at the Wall", said Phifer.McCallany commented on the disconnect between the portrayal of Israel and the Middle East in American media and the reality one encounters visiting here. "You only read about the conflicts - with the Palestinians, with Iran, the uprising in Syria. But when you come here and have a chance to meet Israeli people and experience their vibrancy, it makes you an optimist," McCallany said.Paul Johansson was overwhelmed by his visit to the Yad Vashem Holocaust Memorial in Jerusalem. "My experience was visceral. I never went to the Holocaust Museum in Los Angeles where I live. I was afraid. Coming to Yad Vashem I was floored." 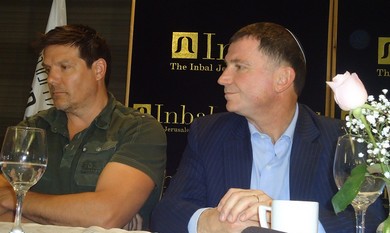 Paul Johansson and Yuli Edelstein; photo courtesy Travelujah
The stars traveled around the country, visiting an IDF base, Caesarea, the Na'Lagaat Theater in Tel Aviv, Safed, the Galilee, Golan Heights, the Dead Sea, and of course, Jerusalem. Along the way they participated in a variety of "meet the people" experiences including Shabbat fellowship at the home of Martin and Rivka Rapaport and their ten children in Jerusalem, and meeting with a family in the Golan Heights where they learned a bit about the unique ways in which Israel educates autistic children.  The group also spent time at a Meir Panim soup kitchen in Tiberias, which operates as a bill-less restaurant.While the actors had an opportunity to meet-up with some of Israel's best known TV, movie and pop music stars, for many visiting Jaffa's Na Laga'at Theater - the world's only stage company for deaf and blind actors - was a unique highlight."We had the opportunity to experience our art from a different perspective. Those actors have to work a million times harder to express something," noted McCord. She added that after seeing a performance at Na Laga'at, she is now hoping to establish a theater for the deaf and blind in Southern California.Many of the Hollywood stars were "Twitter-ing" to their legions of fans about their experiences in Israel, leading Public Diplomacy and Diaspora Affairs Minister Yuli Edelstein to remark "Israel has become a very sexy destination. You're the best ambassadors for the State of Israel."Elisa Moed and Gil Zohar write for Travelujah,  the leading Christian social network focused on travel to the Holy Land. People can learn, plan and share their Holy land tour and travel experiences on Travelujah.