Hundreds of overseas Christians gather for 'Israel is forever' concert

By NICOLE JANSEZIAN/TRAVELUJAH
AUGUST 27, 2013 14:29
Prophet and musician Kim Clement
(photo credit: Courtesy Nicole Jansezian for Travelujah)
Advertisement
For information on Christian tourism and Holy Land Tours to Israel contact Travelujah.Nearly 1,000 Christians gathered at the base of the Sea of Galilee on Monday to declare "Israel is forever" in a concert that kicked off a massive eight-day tour of the Holy Land with the Christian satellite channel, God TV."I welcome you to the homeland of your faith," Tourism Minister Uzi Landau told the crowd.Kim Clement, a prophet and musician based in California, orchestrated the concert which dramatically recounted the restoration of Israel as a state through vivid images of the Holocaust and Middle Eastern music and dance. 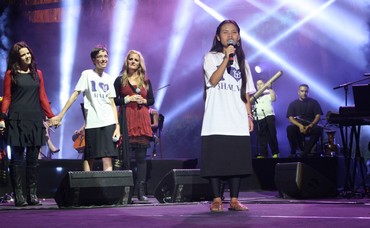 Shalva kids performing with Kim Clement at concert (Courtesy Nicole Jansezian for Travelujah)Clement was joined - in a touching moment and perhaps the highlight of the evening - by members of a musical band from Shalva, an organization for children with special needs. The two teenage singers and musician from the Shalva band sang a version of Leonard Cohen's Hallelujah and a song written especially by Clement for the Shalva children."Breathe your life into me; put your song inside me; cover me with your love," Dina, who is blind, sung in Hebrew. "Everything within me longs to feel your heartbeat. I'm forever yours."Based in Jerusalem, Shalva provides services free of charge currently to more than 500 children with special needs from infants to young adults seven days a week. Clement has visited Shalva several times in the last year and has championed its cause, becoming a significant supporter of the Israeli nonprofit.The Shalva center "houses special needs children - the most amazing thing that I've ever seen," Clement said. "It changed my heart. We adopted four special needs children. It's the heart of God."Founded by Rory and Wendy Alec who are also leading the tour, God TV is broadcast from Jerusalem and is available worldwide on a multi-satellite platform in 200 nations and 240 million homes. Other notable ministers on the tour include Lou Engle, Faytene Grasseschi, Patricia King, Angus Buchan, Matt Sorger and the band Planet Shakers from Australia.

Nicole Jansezian lives in Jerusalem and works for the organization, Shalva, based in Jerusalem. She is a regular contributor to Travelujah-Holy Land Tours.
Advertisement
Subscribe for our daily newsletter