Into the great wide open

A trip to Alaska includes spectacular glaciers, forests and vistas.

By IRVING SPITZ
Alaska 370
(photo credit: Irving Spitz)
Advertisement
Alaska is huge. To gain a perspective of its size, superimpose a map of Alaska on that of the continental US. Alaska stretches from Canada to Mexico and from the Pacific to the Atlantic oceans. Some of its inhabitants live closer to Japan than to their capital city, Juneau.Our Alaskan adventure was spent in the Inland Passage, visiting some of the cities and the spectacular Glacier Bay.The Inside Passage This unique waterway with over 1,000 islands lies in the southeast of the state. It is a world of its own, with snow-capped mountains, glaciers and fjords. It is encompassed by the Tongass National Rainforest, the largest of its kind in the US, comprising an area of over 17 million acres (6.9 million hectares). This rainforest is two-and-a-half times larger than present-day Israel.A unique aspect of the Inland Passage is that there are virtually no roads connecting the towns, and access is only available by sea or air. The Inside Passage was the easiest route for those making their way to the Klondike Gold Rush.Several cruise lines ply the route from Seattle or Vancouver to Alaska and then traverse the Inland Passage, making stops along the way, finally arriving in the ports of Whittier or Seward.We traveled on the Island Princess, operated by Princess Cruises. The ship can accommodate almost 2,400 passengers and has a crew of 800. It is so large that one had the impression of being in a large resort hotel rather than an ocean liner. There were plenty of activities on board to cater to the different cultural tastes of the passengers.One can only marvel at the superb efficiency, organization and brilliant marketing. Despite the large number of passengers, both embarking and disembarking were efficiently done and it never felt overcrowded.Ketchikan This is the southernmost city in the Inland Passage, and was our first port of 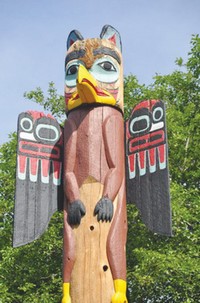 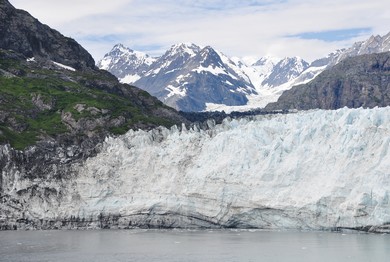 MARGERIE GLACIER in Glacier Bay. (Irving Spitz)Without question, this is the most dramatic sight in the Inland Passage.Jews of Alaska The first Jews came to Alaska with the Russians as fur traders. After the Alaska purchase, Jews strengthened their commercial ties to the country. They were prominent during the gold rush and even financed some of the mining ventures.The first Jewish prayer services took place in Dawson City in the Yukon Territory in 1898. In 1904, a group of Jews in Fairbanks organized a congregation and a year later, acquired a cemetery that is still the only Jewish burial ground in Alaska. Some 750 Jews currently live in Fairbanks, the second-largest city in the state. The Reform congregation in Fairbanks has been described as the world’s northernmost synagogue. Jews have been in Juneau since its very establishment and today, approximately 100 Jews reside there. The Reform Congregation, Succat Shalom, was built in 2004. The small Jewish community in Ketchikan meets weekly for Shabbat services at a private home.The total Jewish population in Alaska today is slightly over 6,000 and the majority live in Anchorage, the largest city in the state. There are two synagogues in Anchorage, the Reform Beth Sholom and the Orthodox Lubavitch Jewish Center, which was established in 1991 and is the only Orthodox congregation in the State.In July 2013, the Lubavitch Jewish Center opened the Alaska Jewish Museum and Cultural Center, which aims to highlight Jewish cultural artifacts and document the contribution of the Jews to the development of the state. The museum’s first exhibit was titled “On the Wings of Eagles,” and we were privileged to attend the official opening. It is well-known that from 1948 to 1950, more than 47,000 Yemenite Jews were brought to Israel in Operation Magic Carpet. What is not so wellknown is that much of this endeavor was carried out by pilots and planes of Alaska Airlines.In the early 1940s, secretary of the interior Harold Ickes and members of Congress considered a proposal to make Alaska a settlement for Jewish refugees from Europe seeking asylum from the Nazis. With Ickes’s support, interior undersecretary Harold Slattery wrote a formal proposal known as the Slattery Report. This bill met strong opposition from non-Jews as well as Jews – notably Ernest Gruening, the first governor of Alaska, who was of Jewish origin.Skagway, together with two other Alaskan cities, endorsed the Slattery Report. Unfortunately, president Franklin D. Roosevelt failed to support the plan, and consequently nothing came of it.The writer was a guest of the Juneau Convention and Visitors Bureau and the Skagway Visitors Center.

An emeritus professor of medicine, the author writes, reviews and lectures on medical topics, music, art, history and travel (www.irvingspitz.com). He was recently recognized with the Sidney H. Ingbar Distinguished Service Award by the Endocrine Society for his contributions to the field.His photograph album can be viewed at www.pbase.com/ irvspitz, and he may be contacted at [email protected]
Advertisement
Subscribe for our daily newsletter